Kirk and His Ghostly Tales

“I did not love cold harmony and perfect regularity of organization; what I sought was variety, mystery, tradition, the venerable, the awful. I despised sophisters and calculators; I was groping for faith, honor, and prescriptive loyalties. I would have given any number of neo-classical pediments for one poor battered gargoyle.”—Russell Kirk, regarding his ghost stories

The Ghosts of Kirk 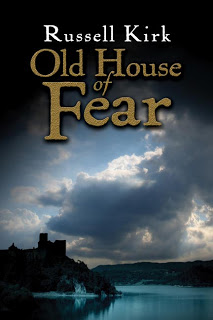 Russell Kirk believed in ghosts—and he wanted you to believe in them, too.

As one of the great conservative minds of the 20th century, Kirk is best known as a founding intellectual of a modern political movement. When he wasn’t writing books about Edmund Burke or columns for National Review, however, he was scribbling away for publications such as Fantasy and Science Fiction, London Mystery Magazine, and New Terrors. In 1958, T. S. Eliot wrote to him: “How amazingly versatile and prolific you are! Now you have written what I should have least expected of you—ghost stories!”

If Eliot had been a bit more familiar with Kirk, he wouldn’t have been surprised at all. Kirk often talked about his brushes with revenants, and was convinced that his big house in Mecosta, Mich., was haunted. Visitors to his home—myself included, as a college student on a trip sponsored by the Intercollegiate Studies Institute—were regaled with ghost stories told by candlelight.

Kirk’s most-influential book was The Conservative Mind, but his most popular one was a novel, The Old House of Fear {now back in print, ed.}. It made the bestseller lists in the early 1960s and sold more copies than all of Kirk’s other books combined. It employed the conventions of Gothic fiction to tell a great story set on a remote and mysterious Scottish island—and also to satirize Marxism and liberalism.

Read the complete article by John J. Miller on NRO

Books on the topic of this essay may be found in The Imaginative Conservative Bookstore. Republished with gracious permission from National Review Online (January 23, 2003). The Imaginative Conservative applies the principle of appreciation to the discussion of culture and politics—we approach dialogue with magnanimity rather than with mere civility. Will you help us remain a refreshing oasis in the increasingly contentious arena of modern discourse? Please consider donating now.

About the Author: John J. Miller

John J. Miller is director of the Dow Journalism Program at Hillsdale College and writes for National Review, the Wall Street Journal, and many other publications. He is the author of five books, including The First Assassin and The Big Scrum: How Teddy Roosevelt Saved Football.