What Must Leaders Know to Wield the “Five Swords of Imagination”? 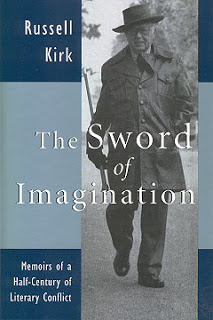 Kudos to Gleaves Whitney for the insightful and well-crafted article on Dr. Kirk’s book The Sword of Imagination. This piece and the book on which it is based are a tonic for anyone concerned about redeeming the time. Contemporary myopia limits vision to merely the political as the only serious realm capable of improving the miserable state of humankind. But the Sage of Mecosta knew better.

Russell Kirk’s rich historical imagination allowed him to break free of the prevailing interpretation of America’s patrimony and give us the brilliant overview of the deeper rootedness which runs through the history of five cities: Jerusalem, Athens, Rome, London, and Philadelphia. Dr. Kirk helped us see that we have inherited the ordering of the soul from the ancient Hebrews, the ordering of the mind from the ancient Greeks, the ordering of the polity rooted in virtue from ancient Rome, the hope of redemption from Christian Jerusalem, common law and contracts from London. Together, the incremental growth of these truths over 3,000 years produced the tree of ordered liberty—a sapling of which was planted in the American colonies and took shape in our Constitution in Philadelphia.

How much folly could have been avoided if our contemporary leaders truly understood the deeper patrimony of ordered liberty? To maintain ordered liberty, our leaders need to gird up and learn to wield the five swords of imagination, because all must be swung simultaneously with trained virtuosity. Battle in the political realm without anchoring in the moral realm rewards the brutish. Political conflict untethered from deep understanding of the historical realm releases the fantastical and the fanatics, who silence the prudent. Neglecting the poetic realm leaves the soul exposed to fatal blows of despair. The sharp prophetic sense of understanding what may yet come to be has been dully suffocated by ideological gases.

Russell Kirk knew that the economic blends into the political, and the political into the ethical, and the ethical into the religious. Until we can sharpen our vision and learn to wield the five swords of imagination, we will continue to be marginalized as a movement. Party politics are intellectually bankrupt, and we need to do serious thinking, writing and teaching to replenish the vision, drawing on the deeper wellsprings of truth.

Let me offer a challenge to the readers and writers of The Imaginative Conservative. What ten books would you recommend as the absolute essential reading list for leaders today, which would equip them to wield the five swords of imagination and lead effectively? I ask this because I have been pained to see the shortsighted and sometimes downright ignorant responses of would-be leaders. (“Honey, go home and read some books!” was my uncharitable response to one, uttered in the privacy of our living room.) So here is my challenge to you: What do you suggest the wise and virtuous leader today ABSOLUTELY must read?

When Russell Kirk was asked by President Nixon what he should read, he answered Notes Toward the Definition of Culture by T.S. Eliot. So I will make that my first nomination. What are yours?

About the Author: Barbara J. Elliott

Barbara J. Elliott is Senior Contributor at The Imaginative Conservative. She is the President of the Center for Cultural Renewal and Scholar-in-Residence and Assistant Professor in the Honors College of Houston Baptist University. She is the founder of the WorkFaith Connection, which transitions people from prison, homelessness, and unemployment into a new job and a new life. She is the author of five books, including Street Saints: Renewing America’s Cities. She received the Roosevelt Award for Human Rights from the President of the United States in 2001. As an American journalist based in Germany during the Cold War, she interviewed those who risked their freedom and their lives to resist Communism.