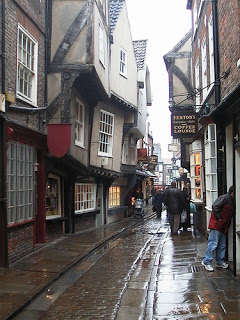 After 14 months in Kabul with scarcely a break, I spent almost a month with family and friends and then went about the serious business of rest and recovery. My London club had been long overbooked for that week in late July, so staggering into the lift between my room and the Members’ Bar was temporarily out of the question. I took the train to York on the travel theory penned by Kipling and oft-quoted by Kirk, namely “Down to Gehenna or up to the throne, He travels the quickest who travels alone.”

A fairly unspoilt and photogenic ancient town much loved by Kirk, York is ringed with defensive walls built by the Romans, Germans, Vikings, Normans, Cavaliers, probably the Girl Guides and many more. It seems to be divided, not unlike Gaul, into three parts: 14th Century churches with the best medieval stained glass in Europe; half-timbered Tudor pubs; and antiquarian bookshops. What else is needed for bliss?

Many of York’s ancient shops and eateries have so subsided over the centuries that they list 20-plus degrees to port or starboard and their occupants hobble within like Long John Silver while overgrown teenagers bang their crania onto the low oaken beams. There are virtually no fast-food joints. Little musical ensembles play period jazz or classical works in the cobbled streets. The most important industry, in the town centre no less, serves cream teas on white linen tablecloths while both locals and visitors wait patiently for seats.

The only litter seems to be tickets from their many fine museums or the mighty York Minster, and if you accidentally drop one you get tut-tutted by proper Yorkshire spinsters arriving for cream tea. There seems to be neither noses picked nor Estuary English spoken, and most people deploy warm, attractive Northern accents. Occasionally one hears the rare Yorkshire incantation ‘e ba gum’ which is quite accidentally Mugabe spelled backwards and registers surprise: it means ‘Oh, by gum,’ something that people used to say before the modern practice of taking the Lord’s name in vain and salting every phrase with gyrations from the Kama Sutra.

Indeed, the talk of the townsfolk seemed to be neither soccer hooliganism nor the league playoffs for having the most illegitimate children. Instead it is Saint Margaret Clitheroe, who refused to plead guilty or innocent to the charges of harbouring Roman Catholic priests (thus protecting her three children from torture) and so was crushed to death in 1586. Even Yorkshire Protestants seem to have second thoughts about this and York abounds in her memorials. I’m not making this up, there was St. Margaret memorabilia all over the town. 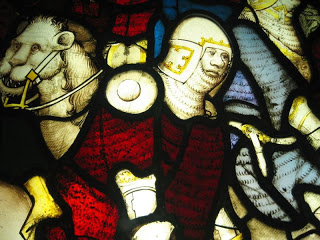 The Castle Museum was founded by a Dr. John Kirk two generations before his equally antiquarian American namesake. A late 19th Century medico, he must have driven his wife mad for he often came home from his surgery penniless, having traded his services for old apothecary bottles, or jeweler’s scales or Victorian sausage-grinding machines even then growing obsolete. His museum replicates rich and humble dwellings from the 18th and 19th Centuries, plus streets full of shops full of Kirk’s memorabilia. John was dead shortly before Russell arrived, but they would have been peas in a pod.

Part of the museum must have been designed by 7-year old boys. Rounding a corner, two young curators made children don cotton gloves before handling 500-year-old jousting swords and main-gauche daggers, the real things. “Look sharp,” warned one curator, “you’re not going to pierce your opponent’s chain-mail unless you put your back into it. Try stabbing harder.” No namby-pamby political correctness and pacifism for the Yorkshire sons and daughters of Celts and Vikings: one very serious little girl looked ready to pierce a brick wall with a sword as tall as she was.

I made my way to St. Savioursgate, the title of one of St. Russell’s finest ghost-stories. Dr Kirk told me that, not long after the war, he had found a fine pub there full of crackling fires and good conversation, and when he went to find it again even the town-planner could not help: the pub had been bombed into oblivion years before he had ever set foot in York. Kirk made it mortal again with his fictionalised tale, but he said that Heaven itself may be very like that ghostly pub. Fortified with a pint of ale and good city maps, I was determined to find that disappearing watering hole and see if my late teacher was inside.

Not being quite au fait with Anglo-Saxon and Norse, I failed to realise that in York a bar means a gate, a gate means a street and a pub means a bar. This means that, say, Mickelsgate is not a gate in the city wall as you may think: it is a street while Mickelsgate Bar is the gate itself. Thus Saint Savioursgate Bar would be a gate in the wall except that there isn’t one, while St Saviourgate is, quite logically, a street. St. Savioursgate Bar, meaning a public hostelry, would be a pub in the street named gate, outside of a gate or bar in the city wall but this had been blown up by the Luftwaffe except when it appeared to the young Dr. Kirk. So far, clear enough.

After three or four trips up and down the two-block-long street, with handsome Georgian houses that had never been pubs, and ugly modern buildings where St. Russell’s spectral public house must have been, I found myself sitting in a churchyard feeling thirsty again. Looking at me, at eye-level from a picnic table, stood a flock of medieval stone gargoyles, perched low so that visiting schoolchildren might stroke their beaks and caress their limestone feathers: York is good like that, making the medieval immanent.

One gargoyle had turned his head away from the others, and he looked for all the world like one of his kinsmen high under the eaves of Piety Hill, the Kirk family mansion. When the weather was right or the moon was out; when the ghostly pub reappeared and opened its doors across the street; did the stone beastie nip in for a nap beside the fire as Kirk and Chesterton and Belloc, and Eliot and Roy Campbell shared rime and song? Did the Old Earl of Sandwich slap beef between two slabs of bread and rejoin his card game with Johnson and Boswell, while Burke scribbled a speech and absent-mindedly dipped his quill into his beer? Or was it all gone: the pub and the coal fires, the beer and the conversation? It began to rain. I felt strangely alone, abandoned by the dead.

But wait. Had the gargoyle smiled? I had not noticed it before. Nor that he appeared to be pointing over another road to where stood a half-timbered, 14th Century pub that was indeed open for business. The creature seemed to hint that the pub I longed to visit on St. Savioursgate had merely not opened yet but that it will open in time, perhaps for all time to come.

Maybe all medieval gargoyles, by dint of long service to God, know like Chesterton that

‘…there is good news yet to hear and fine things to be seen;
Before we go to Paradise by way of Kensal Green.’

Or St. Savioursgate. If I get there first, I’ll leave you a pint of bitter at the bar. You’ll hear us at the back.