The Architecture of Decline: Ugly Does as Ugly Is?

Socialist-brutalist public-housing estates may have played a role in London’s riots of Summer 2011, say architects and urban planners quoted in the UK’s Adam Smith Institute weblog.

One’s first reaction is to note the proximity of urban public-estates housing the under-classes (not working-classes because so few of them work) to the adjacent London riots manned by the same under-classes.

Yet it may not be so simple. The planners and architects write:

…the proximity of riot activity to large post-war housing estates may not be the result of social housing in itself but the type of social housing: most post-war estates have been designed in such a way that they create over-complex, and as a result, under-used spaces. These spaces are populated by large groups of unsupervised children and teenagers, where peer socialisation can occur between them without the influence of adults. This pattern of activity, and the segregation of user groups, is not found in non-estate street networks.

ASI-contributor Tom Clougherty observes: “The trouble with so much architecture from the post-war period is that the state was the client – architects designed housing projects with little or no concern for the people who would actually live in them. The design of housing estates did not reflect the way people lived, worked and played. Rather, it reflected a utopian socialist ideology which central planners wished to impose upon them. Of course, that attempt failed miserably.”

This would come as no surprise to Russell Kirk, who early on warned of the psychological and anti-social consequences of brutalist state architecture. Stratheden, an 1866 insane-asylum near St. Andrews, was torn down in the early 1970s and replaced by a plate-glass, modernist facility. Dr. Kirk told me that the Scottish patients hated it. Perhaps ashamed of their ailments (quite unnecessarily but nevertheless), they complained to their doctors that “God could watch them” through the glass, while the dark, old building afforded them privacy in which to struggle against their devils. Mentally ill or not, humans seem to need traditional comfort provided, not surprisingly, by traditional architecture. 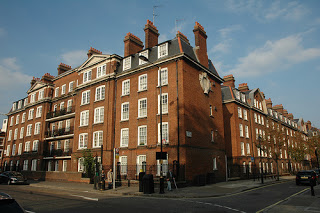 Indeed, spotted throughout London are earlier, pre-socialist examples of housing estates built entirely on a human scale, by private money in Edwardian times. The Peabody Estates, still in private hands, were built to house the working-classes who toiled among the rich. Today, with their neat communal gardens and well-kept window-boxes, they look nothing like the ghastly, state-owned, concrete jungles, and riots never seem to occur nearby. Peabody residents do not litter their forecourts with broken bicycles and hamburger-wrappers; there are no burnt-out flats abandoned to crack-users: they respect the handsome premises built to respect them.

One might think that the managers of the privately-owned estates can select only admirable people to reside within, while public housing authorities cannot. But one suspects that generations of working-class families have lived in the same Peabody flats and, if so, remain observably as upstanding, respectable and tidy as their Edwardian forbearers. Within a community they are far more admirable and desirable as neighbours, I believe, than self-centred Yuppies in the posh flats surrounding them. This would not surprise the Sage of Mecosta, who knew that while we build buildings, our buildings build us.

Outside of government-service perhaps, architecture seems to attract more egotists and ideologues than other vocations.

Once in London, a young American architecture student explained it to me. The whole point, he said patiently, was for the architect to impose his greater mind and coherent creative design on every aspect of life for the people contained within his building; from the edifice itself down to their rugs and furniture, curtains and towels, plates and cutlery.

He was a living legacy of Weimar’s modernist, Bauhaus ideologues and I laughed. Once he designed and built his perfect high-rise inside and out, quirky humans would first paint their doors different colours, then the South Asian ladies would dry their long, colourful saris off his minimalist balconies on which other people would hang their laundered socks and underwear, and erect little tin sheds to contain surplus belongings or to raise their racing pigeons. Inside, they would rip down his pale-gray, Rennie Mackintosh-inspired curtains to replace them with leopard-skin prints, and cover his plain, whitewashed, modernist walls with lively sports posters for Manchester United: in other words, with whatever made them happy. And jolly right they’d be.

I could have stabbed him in the heart: he grimaced and clenched, knowing that my predictions were correct. Yet even such ugly-if-valiant attempts to impose a resident’s individuality are not enough to counterbalance the ruthlessly-imposed architectural savagery of government housing estates.

It is a rare architect who thinks ahead, respecting his customers. ASI’s founder, Madsen Pirie, met at Hillsdale College an architect called to task for building a new college campus somewhere. Scant weeks before the students arrived, he had laid no sidewalks. “I thought I’d see where the students want to walk, and then pave only those bits,” he explained, avoiding the otherwise inevitable paths worn through the grass. Such wise folk are few.

State planners are constricted by scarce funds, and use the trendiness of modern architecture to justify building what Prince Charles dismisses as “carbuncles.” Modern architects eagerly join the charade. Similarly, heavy velvet curtains, thick carpets and linen tablecloths absorbed sound and kept traditional restaurants quiet, until Sir Terence Conran realised that he could save a fortune by building his stylish food-joints without soft furnishings that had to be cleaned and replaced periodically. A million restaurateurs made the same financial calculation, removed the curtains and carpets, installed tiles or hardwood that could be cleaned with a fire-hose, and created hostile environments as noisy as a wartime aerodrome.

Architectural brutalism, caused by parsimony and greed, egotism and ideology, are defended as modernist design in trendy eateries and in post-war tenements that both contain and create rioters.

Writers who escaped from the most impoverished and disease-ridden pre-war tenements, such as Glasgow’s notorious Sauchiehall Street, appreciated a community there that disappeared in the cleaner socialist housing estates that followed. The old Glaswegian tenements resembled the ancient Roman ones that were among the first uses of concrete: architecture built to human scale, the scale of the tidy and comfortable Peabody Estates.

Some American criminologists point to reduced crime in those parts of public housing estates containing little dead-ends and cul-de-sacs that create boundaries and a sense of community within. So, in some cases, more concrete walls may reform our concrete-jungles while others will need to be torn down completely.

But now that we have the populous public hells and the suffering they create, who can afford pay for something better? Private industry and the rich are far too heavily taxed to build the grand charities of Edwardian times, and modern governments are too broke.