(with apologies to Ray Bradbury, Isaac Asimov, Robert Heinlein and everybody else)

July 1, 2019: We finally escaped the cramped quarters of our spacecraft, The Triumph of America, and moved into Eagle 1, the prefab base camp that became our lunar home. Despite slightly more living space, Lieutenant McAlister and Dr. Swann were still at loggerheads. What seemed to be merely a conflict over the microwave transmitter was a much deeper clash of personalities and some of us could see it coming, especially Commander Benson.

“He’s not entitled to any more than the rest of us,” the lieutenant objected. “You’re playing favourites, ma’am, and we can all see why.”

The room went still: few suspected that relations would deteriorate so fast, or that the brash young astronaut would stoop to accusations of racial favouritism. Once that Petrie dish was opened, we’d never get the toxic bacilli back under glass.

The commander’s face failed to register the calculated insult.

“Peter’s two older boys are serving with Navy Seals’ units on the front-lines in Iran and Malaysia,” Shiela explained again, “and his wife and the little ones are home in Chicago, right in the middle of the food riots. If our geologist needs extra time on the transmitter to talk to his family, he will get it and that is my decision.”

The wiry, white New Yorker saluted perfunctorily, scarcely cloaking his resentment. Seated at the common table, Shiela returned to editing her remarks for the spacecast to earth, for not even our commander was permitted the luxury of private quarters.

July 2, 2019: It was clear from Peter’s conversations back home, and most everyone else’s, that NASA was screening our news. From unofficial channels, it sounded as if things were getting worse earthside.

The Middle Eastern invasion was already six years old and as costly a stalemate as the newer proxy war against China. America’s police action in South America (we were under strict orders not to call it a war) was maybe the worst of all, as Venezuela had become a magnet for newly-formed insurgent groups from across the continent. At home, the federal work-camps were unpopular with the unemployed, and shrinking food rations had begun to provoke violent outbursts in major cities.

“My youngest daughter, Aretha, hears the gunfire and asks if she can come live with us on the moon,” murmured Peter, who put a brave face on everything. “I promised her that Daddy will be home as soon as we’re relieved.”

But that required a second team and a second vessel. Promised in six weeks, colleagues back at Canaveral whispered that they had not even begun synchronising the boosters.

Meanwhile, we had work to do. Peter was looking for breaches in the anorthositic crust, perhaps where a small asteroid had struck, that would give us a peek beneath the lunar surface. His odds were better than mine, as the team’s paleo-biologist and ‘fifth-wheel’ hoping irrationally for fossilised signs of life. Shiela filled bags with small rocks for chemical analysis. Back in Washington, the President was convinced that the moon contained vast fortunes in rare metals, of which Shiela had so far found no sign in her makeshift lab at the base.

July 3, 2019: Morale took a beating this morning, when ComSat confirmed that the relief team would be postponed for at least three months over a financing wrangle with Congress, but that was the least of it. Peter Junior had been injured in combat in Malaysia’s Cameron Highlands, nobody would say how seriously, and communication with Chicago was down indefinitely so Dr. Swann could not console his wife. He was taking it hard, and could scarcely be lured from his bunk despite our best efforts.

“What do you think of the draft?” Commander Benson asked me after I had glanced over it.

“It’s certainly patriotic enough,” I said as convincingly as I could. “Hey, it’s what they want. They’ll probably replay it during the Super Bowl.”

The chemist grimaced: “The President promised in his first term. We’re the new Manifest Destiny, the Saturday Lunar Matinee, the Big Distraction.”

We agreed that there were no other options. SatCom would relay her remarks, through ComBase in Canaveral, to seven billion people worldwide and especially to 300 million frightened Americans potentially kept hopeful by technology.

We were the Edisons, the Alan Shepards, the Jonas Salks who tried to instil a faith lost in God, government and our fellow men.

At least I thought we had agreed, until Commander Benson asked Mom to speak with her privately. Mom, as we all called Air Force Captain Rita Velluci, was a sweet, middle-aged, Italian-American lady from Ventura, California, and the best satcom-ops technician in the business.

“Fourth of July or not,” she complained merrily, “I can’t bake hot-dog buns in zero gravity.” Otherwise she would have tried: there was nothing else to call her but Mom. The pair retreated into the oxygen reprocessing unit. 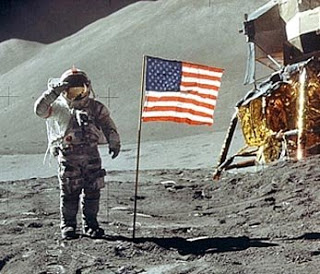 July 4, 2019: The morning satcast revealed that Peter Junior’s death had been quick, painless and with honor, but no one really knew for sure. Still cut off from communication with his family in Chicago, Peter nodded politely to our hugs and condolences, even from Gary McAlister. But otherwise he sat motionless on his bunk, staring into his empty coffee mug as tears ran down his cheeks.

Commander Benson nodded somberly. “My call, Captain, and my responsibility,” she replied.

“All I have to do is tell the satellite to broaden the frequencies,” the communicator explained. “Then it feeds Canaveral and everywhere else on the planet. You’ll have three minutes before they can shut down satellite transmissions altogether.”

NASA signalled that the President had concluded his Independence Day remarks, and in sixty seconds Commander Benson would begin her historic spacecast from mankind’s first permanent colony on the moon. Captain Velluci frantically keyed data into the transmitter, nodding at the skipper when she had finished

Sheila glanced up at us from the table.

“You are about to hear a lifelong American patriot commit treason,” she said. Then she turned to the trembling scientist beside her.

Books on the people and topics discussed in I, Earthman may be found in The Imaginative Conservative Bookstore.