Before You Vote, Read Orwell’s Animal Farm and Politics and the English Language 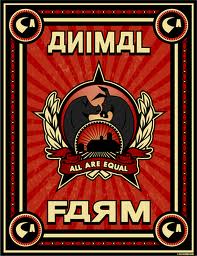 For Christians living in a culture such as ours, a key issue is the “grammar” and “rhetoric” of our daily lives. Imagine what would happen if we embraced the vocabulary of our faith and it became the way we talked to one another and about one another. I recently read Animal Farm and Orwell’s essay Politics and the English Language, as well as Orwell’s Inside the Whale. Speaking of the English language (in Politics), Orwell remarking on our language says,

it becomes ugly and inaccurate because our thoughts are foolish, but the slovenliness of our language makes it easier for us to have foolish thoughts. The point is that the process is reversible. (103)

In Orwell’s essay Inside The Whale (1940), he brilliantly dissects totalitarianism. We, in America, should not be so ignorant of history or the workings of dictatorships to be so naive as to not recognize the real possibility that totalitarianism can even exist in the presence of a democratic republic.

almost certainly we are moving into an age of totalitarian dictatorships – an age in which freedom of thought will be at first a deadly sin and later on a meaningless abstraction. The autonomous individual is going to be stamped out of existence.

Many Americans would stand and shout that this type of oppression exists “over there” in “other parts of the world,” but where freedom of conscience is squashed, one can mark the days on the calendar before other freedoms are eliminated.

One of the many advantages in reading the Great Books is that truly Great books have the ability to remove us from our present moment and take us somewhere else, expose us to different ideas, issues, and landscapes, and then return us to our own. This enables us to see our own world, and more clearly see our own moment and issues. Such a work is George Orwell’s Animal Farm. Due to the recent attention to our political landscape, and what will certainly endure for the next several months, we all need a different way of seeing political debates, political advertisements, and political campaigns. Again, George Orwell’s Animal Farm is of great assistance.

While I have several favorite moments, and a few favorite characters for different reasons, I will not give away too much and hope that if you have never read this work you will read it, and if you read it sometime ago, you will read it again before you vote. In the story there is a character, Old Major, who says,

Man is the only real enemy we have. Remove man from the scene, and the root cause of hunger and overwork is abolished forever.

Later the same character asks, do not “all the evils of this life of ours spring from the tyranny of human beings?” This reminds me of what happens when someone assumes the Oval Office, having promised instant improvement, but then blames the previous administration for months and even years for all the woes and evils he is facing. Adding that it will take four to eight years to correct all of these evils. All the time ignorant of the woes and evils he is creating for the next President.

Animal Farm is also an extraordinary exploration of the workings of propaganda. It is sometimes comical, but often deadly serious how characters such as Squealer (think White House press office or major network news media) will take a statement and twist and turn it and turn it and twist it to where it sounds like something very different from what is reality and from what was previously stated.

It would also be well worth your time to read Jacques Ellul’s Propaganda: The Formation of Men’s Attitudes—a brilliant work that explores the nature of political propaganda and the more hideous sociological propaganda. Back to Animal Farm. In a number of key places, Squealer corrects what others are saying they know to be the truth, what they have heard, what they have seen and all that has even been painted on the side of the barn. At one place in the story it says this of Squealer,

the best known among them was a small fat pig named Squealer, with very round cheeks, twinkling eyes, nimble movements and a shrill voice. He was a brilliant talker, and when he was arguing some difficult point he had a way of skipping from side to side and whisking his tail which was somehow very persuasive. The others said of Squealer that he could turn black into white.

Among the many memorable lines from Orwell’s Animal Farm, no doubt the phrase “all animals are equal but some are more equal than others” is the best known. One can think of our current political and social landscape where we could say that in the United States of America all are equal, but more will be made equal by those who work and accomplish, and will be compelled to be responsible for taking care of the less equal by making the less equal the most equal.

About the Author: Robert M. Woods

Robert M. Woods is the Headmaster at the Covenant School in Dallas, Texas, and teaches in the graduate program at Faulkner University. His work has been published in several journals and he writes regularly for his website Musings of a Christian Humanist.