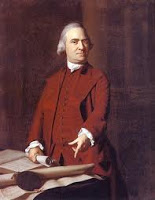 Let each citizen remember at the moment he is offering his vote that he is not making a present or a compliment to please an individual — or at least that he ought not so to do; but that he is executing one of the most solemn trusts in human society for which he is accountable to God and his country. –(1781)

For more on the American Founding visit The Imaginative Conservative Bookstore.

About the Author: Samuel Adams