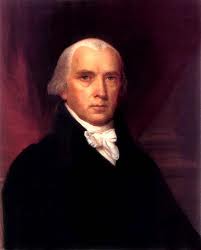 The first question that offers itself is, whether the general form and aspect of the government be strictly republican. It is evident that no other form would be reconcilable with the genius of the people of America; with the fundamental principles of the Revolution; or with that honorable determination which animates every votary of freedom, to rest all our political experiments on the capacity of mankind for self-government.—Federalist 39

For more on James Madison and the American Founding visit The Imaginative Conservative Bookstore. The Imaginative Conservative applies the principle of appreciation to the discussion of culture and politics—we approach dialogue with magnanimity rather than with mere civility. Will you help us remain a refreshing oasis in the increasingly contentious arena of modern discourse? Please consider donating now.

About the Author: James Madison

James Madison, Jr. (March 16, 1751 – June 28, 1836) was an American statesman, political theorist and the fourth President of the United States (1809–17). He is hailed as the "Father of the Constitution" for being instrumental in the drafting of the U.S. Constitution.