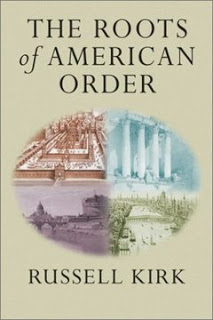 Seek­ing for the roots of order, we are led to four cities: Jerusalem, Athens, Rome, and Lon­don. In Wash­ing­ton or New York or Chicago or Los Ange­les today, the order which Amer­i­cans expe­ri­ence is derived from the expe­ri­ence of those four old cities. If our souls are dis­or­dered, we fall into abnor­mal­ity, unable to con­trol our impulses. If our com­mon­wealth is dis­or­dered, we fall into anar­chy, every man’s hand against every other man’s. For, as Richard Hooker wrote in the six­teenth cen­tury, “With­out order, there is no liv­ing in pub­lic soci­ety, because the want thereof is the mother of con­fu­sion.” This sav­ing order is the prod­uct of more than three thou­sand years of human striving. (Roots of American Order)