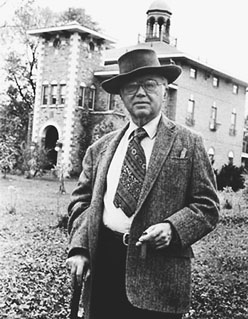 The thinking conservative, in truth, must take on some of the outward characteristic of the radical, today: he must poke about the roots of society, in the hope of restoring vigor to an old tree half strangled in the rank undergrowth of modern passions. The conservative does not much enjoy this unaccustomed function, for, with Randolph of Roanoke, he has found the philosopher’s stone, which is this formula: never disturb, except under the greatest necessity, a thing that is at rest. That dread necessity, however, is upon us; the conservatism of enjoyment must be exchanged for the conservatism of labor; and it is for us to prove that the conservative can water and prune, if he must, the great tree of society, as well as pick the fruit. In this century the conservative cannot be a lotos–eater. He must perform a higher working if we are all to be saved from the lowest form of work, the servile labor of a proletariat directed by an omnicompetent state. (Program for Conservatives)