Crowd Culture: Tyranny of the Herd 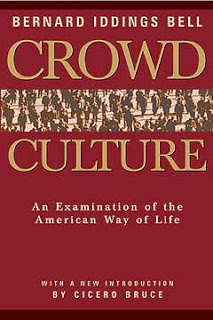 Crowd Culture: An Examination of the American Way of Life
by Bernard Iddings Bell.

Americans watching the political upheavals in Egypt and elsewhere feel a variety of emotions, ranging from excitement about potential reform to fear of political regression. Both instincts revolve around the image of crowds in the streets—their promise and their peril. While we might take a justifiably cautious attitude toward crowds elsewhere, few of us tend to think of ourselves as members of a crowd. After all, America is the land of the individual.

Nearly sixty years ago, a learned Episcopalian priest witheringly disputed that notion. In a concise book of just four chapters, he argued that American life had become stiflingly conformist, where the dictates of the crowd guided most people’s choices. Further, wrote Bernard Iddings Bell, the “chief threat to America comes from within America.” It came, he wrote

from our prevailing self-admiration, from indisposition to listen to adverse criticism of our way of life, disinclination to see ourselves as we are, an unwillingness to confess our sins which has come dangerously near to being an inability to see that there are serious faults to admit and remedy. Most Americans regard an insistence on national self-criticism as traitorous or near it.

Today’s readers are more likely to associate such language with liberal thinkers, but Bell was an important if little-remembered figure of the old traditionalist Right. In his 1952 book, Crowd Culture, he offered an unsparing view of America’s “self-applauding jamboree,” which he saw as bound up with its democratic ethos and a decline of standards. Central to his criticism was the American elevation of the Common Man, whom Bell viewed in undeniably elitist terms—“for the most part ill-informed about how and for what man must live if he would be happy.” Bell believed that America’s obsession with egalitarianism had impoverished education, the arts, politics, and religion. He did not write against the Common Man’s advancement, but against a society that seemed interested in advancing only on narrowly economic, materialist grounds.

Born in Dayton, Ohio in 1886, Bell enjoyed a distinguished career in the Episcopal Church as a teacher and writer. From 1919 to 1933, he served as warden of St. Stephen’s College (now Bard College) in Annandale-on-Hudson, New York, and during that period he also taught at Columbia. In his later years he served as canon of churches in Rhode Island and Illinois and as a lecturer at the University of Chicago. He was a prolific writer, authoring twenty books with contrarian titles like Unfashionable Convictions and God Is Not Dead and publishing essays in The Atlantic and The New York Times. He died in 1958.

Crowd Culture, long out of print like many of Bell’s books until the Intercollegiate Studies Institute reissued it in 2001, makes a devastating attack on what Bell saw as the coarsening of American culture and the abandonment of its cultural and religious heritage. He lamented the mainstream culture’s worship of money and status over morals and character. Schools had abandoned a foundational curriculum, failed to impart proper manners and civility, and left high achievers, the leaders of tomorrow, to fend for themselves in favor of an all-encompassing focus on equality. Churches, too, increasingly instructed their congregations not in the timeless articles of the faith but watered-down, feckless accommodations to the latest trends. In his conclusion, Bell urged rebels to challenge the cultural rot, but he warned these conservative iconoclasts that they should be prepared to suffer—whether in financial deprivation or personal scorn. “We need such nonconformists,” he wrote, “if democracy is not to become absurd,” anticipating what would soon become an important word on the left to describe American culture.

The way out, Bell thought, was through the leadership of what he called a democratic elite:

Some sort of elite is inevitable. Why not develop one from among the Common Man’s more gifted sons and daughters and educate it for cultural leadership? Why not through such a democratic elite impart to the people at large at least enough wisdom to perceive when and wherein the alleged good intentions of our current leadership, political and cultural, are phoney?

Bell’s idea of an elite rooted in American values—based on merit, not birth—puts him, in this regard at least, straight in the Jeffersonian line, though his estimation of ordinary people was much more skeptical than Jefferson’s (or at least Jefferson’s rhetoric). It’s a vision others have held up before and after him, though it’s rarely clear how to go about achieving it—let alone how, once this elite is identified, America could ensure that it provided the leadership while maintaining a democratic system. These seem like impossible circles to square, though the weaknesses of our current arrangements are apparent enough.

Bell’s concerns were common to the traditionalist conservatism that emerged after the Second World War, which decried “the spectacular rise of a mass society,” as conservative historian George Nash puts it. They were the concerns, minus Bell’s religiosity, of the libertarian right even earlier. The misanthropic Albert Jay Nock (with whom Bell was friendly) had railed against a society “too ignorant to know that there is such a thing as ignorance.” But elitist as he was, Bell had no illusions about the leadership class, and he rejected what he called Nock’s “pitiless” disdain for the Common Man, whom Nock once described collectively as “Caliban, a clod.” Bell warned—with considerable prescience, a decade before the arrival of the Kennedy “whiz kids”—that recruiting leaders from among the most educated was no guard against human folly:

the Common Man is not the only man that can fail. Caliban has been defective, but so has Prospero…. Prospero corrupted by conceit can loose more woe, can more corrupt our culture, can more effectively destroy our country, than a multitude of Calibans. Worse than the crowd is he who forgets the common flesh of which all men are made.

The charge against Prospero would soon engage the Right and eventually drown out Bell’s focus on the masses. The fifties would see books like William F. Buckley’s God and Man at Yale and Whittaker Chambers’s Witness, which helped articulate the growing sense on the Right that the problem in America was not the common man but elites in government and the universities, who often set themselves in opposition to American mainstream values. By the 1960s, Buckley would make his famous comment that he would “sooner live in a society governed by the first two thousand names in the Boston telephone directory than in a society governed by the two thousand faculty members of Harvard University.” Buckley’s view was more nuanced than this statement suggested, but his words were useful for those pushing the right in a more populist direction.

And that push was crucial to political success. The modern Right didn’t start winning elections by running on Bell’s critique of American provincialism or the lonely anti-materialism of thinkers like Richard Weaver or Bell’s friend Russell Kirk. The Right rose politically when it made common cause with mainstream America, embracing the nation’s middle-class habits, middle-to-low-brow culture, native practicality, and aversion to abstract intellectualism. This accommodation was probably necessary in a democratic culture, but it came at a cost—chief among them a short-changing of the conservative’s native skepticism, his most essential tool in a world always bursting with ruinous overconfidence.

“The masses will not submit anymore to coercion,” Bell wrote near the end of Crowd Culture, “but they are beginning to get a little tired of being flattered expensively, enticed to get nowhere worth getting to, misled by a precious crew of low fellows of the baser sort who treat the Common Man and his children more cynically than ever they were treated by the formerly privileged few…” A “precious crew of low fellows” does nicely as a description of today’s political class. The arrogance and venality of governing elites has hurt the country in more ways than just damaging our democratic system and undermining public faith in our institutions. They’ve also made it easier to look outward for the source of our troubles: It’s all the politicians’ fault. We ourselves are blameless.

The slickest politicians are eager to indulge in this game themselves, running against the business of politics so as to secure their place within it—all the while pandering to the faultless souls whom they seek the privilege of bilking for the next several years. “The Common Man in America is encouraged,” Bell wrote, “by those who would be lifted to power on his shoulders, to think and act in ways dangerously provincial.” It’s an easy game to play, flattering the multitude: it’s much harder to tell people, with respect, that they should aim higher, that perhaps they don’t know enough, and that the country as a whole needs to return to nearly forgotten habits of self-criticism. Today as in Bell’s day, most thought leaders hew closely to the “wisdom of the crowd,” a phrase that sometimes seems to equate popular choice with philosophical truth.

To be sure, Bell’s brand of elitism is mostly a dead end for any project of conservative renewal. Bell viewed intelligence too narrowly and took too dim a view of what the modern common man was capable of achieving. And his religious exhortations, eloquent though they are, mostly insist upon themselves without convincing skeptics.

Still, Bell’s gloom is bracing today, when some on the right seem eager to demonstrate that being ignorant is preferable to being an “elite,” a reverse arrogance that’s as juvenile as it is destructive. Any conservative politician today wishing to make a more challenging appeal, one that encouraged respect for genuine merit and disdained flattery, would face an uphill struggle, but it would be a worthwhile effort. If conservatism is for rigor in thought and action, then that same rigor should be brought to bear when scrutinizing ourselves. No parade of self-appointed conservative saviors will do it for us.

Books mentioned in this essay may be found in The Imaginative Conservative Bookstore. Republished with gracious permission from the University Bookman. The Imaginative Conservative applies the principle of appreciation to the discussion of culture and politics—we approach dialogue with magnanimity rather than with mere civility. Will you help us remain a refreshing oasis in the increasingly contentious arena of modern discourse? Please consider donating now.

About the Author: Paul Beston