The Silver Surfer: Rider of the Spaceways

The Silver Surfer was one of Jack Kirby’s inventions for Stan Lee’s Marvel Comics, a silver-skinned alien on a flying surfboard endowed with the “Power Cosmic” (the ability to play around with–reshape and transform–matter and energy). This meant he could generate really big explosions if needed, and was basically much more powerful than most other Marvel characters, if he used his full strength. But what made him interesting was that he usually didn’t. The Surfer was a victim. We’ll come back to that.

Why a surfer? True, it was the era of the Beachboys (the Surfer made his first appearance in 1965). It also looked very cool when he summoned his board while jumping into the air and soared away. The theory behind this was that the cosmos is a great sea of energies, on which the Surfer could skim and navigate. His original role was that of herald to the planet-eating predator, Galactus: a giant in an emblematic, hi-tech purple costume who needed to consume large amounts of life-energy to survive. In Kirby’s mythopoetic imagination Galactus was “Power.”

Kirby saw the Surfer as a being of pure energy created by Galactus, his task being to search out planets for his master to devour. For the original 18-book series devoted to the Surfer, which appeared without Kirby (who returned only for the final episode), Lee developed the back-story of the character further. Instead of being created by Galactus, the Surfer had volunteered to serve Galactus in order to save his home planet Zenn-La. The story was told in the first issue of the new comic book in 1968.

In his first appearance, the Surfer brings Galactus to earth, but out of pity for the humans turns against his master–for which crime he is sentenced never more to roam the spaceways, but to be confined to earth behind an invisible barrier. His compassion, coupled with the enmity of those he tries to save and his longing for his beloved Shalla Bal back on Zenn-La remained consistent features of the series. Like Spider-Man, only more so, the Surfer has few, if any friends. His weird appearance and immense power causes him to be feared and misunderstood. Every superhero comic has to contain at least one battle, but most of the fights in The Silver Surfer are due to his being attacked through some misunderstanding, and having to defend himself. 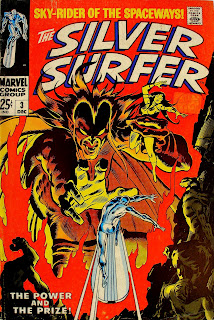 The character of the Surfer has nobility, despite his occasional bursts of uncontrolled anger and the frequent recourse to self-pitying monologue. In the third issue, the spiritual dimension comes to the fore, with the appearance of the devil himself, Mephisto, who uses Shalla Bal as bait in a trap for the Surfer. He gives his reasons on page 20: “SINCE THE DAWN OF TIME–SELDOM HAVE I SENSED SUCH GOODNESS OF SOUL–SUCH PURITY OF SPIRIT–AS I SENSE WITHIN THE SILVER SURFER. ALL THAT YOU ARE–ALL THAT YOU STAND FOR–IS ABHORRENT TO THE LORD OF THE LOWER DEPTHS! SO LONG AS YOU EXIST, MEPHISTO’S SCHEME SUPREME WILL EVER BE IN JEOPARDY!” It seems that mankind is near to complete submission to the devil’s will, and the Surfer stands in the way as a beacon of uncorrupted moral goodness.

The Surfer descends into hell, unafraid of anything Mephisto can do to him (“YOU CAN DO NO MORE THAN SLAY ME!”), and unmoved by the temptations he offers (wealth, women and power). Implanted in Mephisto’s brain for a battle of wills, the Surfer is victorious. Even the temptation of being reunited with Shalla Bal is ineffective, since as they both know, “HOW CAN LOVE HAVE MEANING IF IT COSTS YOUR VERY SOUL??” Separated by a universe, they will belong to each other forever, and this bond Mephisto cannot destroy.

The Surfer thus has saintly attributes, but he is far from perfect. In issue 15, after jumping too quickly to the conclusion that the Fantastic Four have betrayed his trust, the Surfer muses: “WAS I TOO HUMAN…OR…NOT HUMAN ENOUGH?” The story and dialogue of the classic Surfer comics were always concerned with the ambiguity of human nature and existence: a humanity that tears itself apart with war and greed, that fears the stranger and inflicts pain without thinking, yet rises to great heights of virtue and wisdom, as though yet to “come of age” as a species. What is of interest about the comic is not just the artistry of the pages, and certainly not the quality of the writing, but the Big Questions raised about our existence in a majestic, unpredictable, beautiful cosmos. Despite all the alien species encountered, somehow humanity always remains special, our freedom and our inviolable conscience the pivot of every story.

I have been writing only of the classic Surfer. Of his more recent appearances I know much less. He appeared in one truly dreadful film (Fantastic Four: The Rise of the Silver Surfer.) There was a decent enough animated series that can be found on YouTube. The 18 issues I referred to have become collectibles. In 1987 he was given a new series, presaged in 1978 by a Kirby-Lee graphic novel in which he regains the freedom of space in the service of Galactus. For this novel, the whole story was revised somewhat, but the great Surfer themes remain. As Lee explained in his Preface, “Ever since I first saw our gleaming sky-rider, when Jack placed the initial drawing on my desk, I felt he had to represent more than the typical comic book hero. Somehow or other, Jack had imbued this new, unique, totally arresting fictional figure with a spiritual quality, a sense of nobility, a feeling of almost religious fervor in his attitude and his demeanor.” The closing words of the comic are these: “ONLY TRUTH IS CONSTANT! ONLY FAITH ENDURES! AND ONLY LOVE CAN SAVE THEM–BUT WHERE CAN LOVE BE FOUND?” “FOR ONE SHINING SECOND OF ETERNITY, THE WORLD KNEW SUCH A LOVE! BUT WHAT A PRICE WAS PAID!”

I wonder if anyone has written a thesis on Stan Lee as a moral influence on our times. His perennial themes are the goodness and uniqueness of the human person, the supreme importance of self-giving love, the challenge of making moral choices in a fallen world. In the recent spate of comic-book movies based on some of his most popular characters he appears in a series of cameos. In Spider-Man 3, the conclusion of a trio of films about the battle between good and evil (finally in the soul of the hero himself), he appears alongside Spider-Man’s alter ego Peter Parker looking up at a billboard praising Spidey’s achievements and comments, “You see, one man can make a difference.” It is the message he wants to get across in all his work, a message he managed to convey in coloured pictures. We don’t have to despair in the face of overwhelming evil or the impersonal scale of modern society. Life will be a struggle, but it is worth fighting for purity, for nobility of soul, for justice, for kindness. Chivalry lives. The greatest heroes are ordinary people like us. Grace can strike anyone, like a gift of superpowers from the bite of a spider or a burst of radiation; the question is how we will respond to it. Will we become a hero or a villain? In the words of Spider-Man, “You always have a choice.” 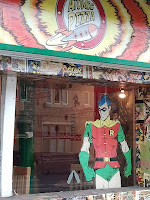 Kids around the world have received a moral education from Lee’s comics. It is just a pity they often haven’t had it from anyone else.

P.S. The Surfer dropped into the Atomic Pizza cafe in Oxford recently, where I snapped this picture. He looks hungry enough to eat the whole place. In the window I could see Robin (from rival comics company DC) already getting up to leave. Wonder who else was there?

As part of an occasional series on superheroes, this is extracted from an essay I wrote some time ago (not sure where) that concerns the moral effect of some comic books.

Books related to the topic of this article may be found in The Imaginative Conservative Bookstore. Published here by the gracious permission of the author, this post originally appeared in Beauty in Education.