Culture: On the Way Down 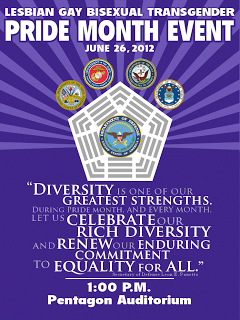 When I was a child, I thought that living through a degenerate period would be great fun – one big party. Guns blazing, fast cars, beautiful girls, plenty of adult beverages – at least that was my idea of it from having watched movies about the Roaring Twenties with James Cagney. Now, as an aging adult, I really am living through such an era, and it’s not fun at all. In fact, it’s depressing.

However, I do take solace in my role as a cultural pathologist. It can be amusing to observe the level of absurdity to which things go when moral principles have been reversed. The logic is usually impeccable and the consequences inexorable. Only the results are insane.

Take a good look at the poster above. It is not a parody. How did we get to the pink Pentagon? It is the product of the reversed judgment on the morality of homosexual acts. If sodomy is the moral equivalent of the marital act, then those who base their lives on it must not only be welcomed, but celebrated, and in some way compensated for past discrimination. When I was working at the Voice of America back in the 1990s, there were already such posters in the lobby of our building during Gay Pride Month. It was only a matter of time before the march through the institutions reached the Pentagon.

The celebration of “rich diversity,” however, is not diverse enough to include those who have not shared in the moral reversal – that would include the observant followers of every major religion. Those religions, including Christianity, Judaism, and Islam, hold that homosexual acts are morally repugnant. Therefore, their teachings must be privatized, while homosexuality is publicized and celebrated. Of course we can’t blame the poor homosexuals for all of this. First came the embrace of divorce and contraception. Once sex was divorced from procreation, the rest became more or less inevitable. If serial polygamy is okay, and contraceptive sex is okay, what could be wrong with a little sodomy? I only wish there were survivors from the 1930 Lambeth Conference, which first endorsed a limited use of contraceptives, who might be forced to attend the Gay Pride event at the Pentagon, so they can dwell upon what it hath wrought. Just as there’s no such thing as being a little bit pregnant, there is no such thing as a little compromise on moral principle.

Here is how President Barack Obama did it. Let’s recall his May 9th statement endorsing homosexual marriage:

“When I think about those soldiers or airmen or marines or sailors who are out there fighting on my behalf and yet feel constrained, even now that Don’t Ask Don’t Tell is gone, because they are not able to commit themselves in a marriage, at a certain point I’ve just concluded that for me personally it is important for me to go ahead and affirm that I think same-sex couples should be able to get married.”

First, Obama forced the repeal of Don’t Ask Don’t Tell on the reluctant military, and then used that very same military as the excuse for endorsing homosexual marriage, as if it were the military asking for it. Those poor Marines in the foxholes of Afghanistan were just aching to marry each other, and Obama comes to their rescue.

This is completely risible, but one has to admire the audacity of his transparently sophistical argument. What’s more, it’s working. Obama is pulling everyone along with him.

Take, for instance, the Secretary of Defense, Leon E. Panetta, a fine graduate of the Jesuit Santa Clara University, who is hosting the first ever Pride event at the Pentagon “to personally thank all our gay and lesbian service members, LGBT DoD civilians, and their families for their service to our country,” as he says on a Pentagon video. Panetta, a Catholic, attended both Santa Clara University undergraduate and the law schools. On the Santa Clara web site, Panetta says, “In politics there has to be a line beyond which you don’t go—the line that marks the difference between right and wrong, what your conscience tells you is right. Too often people don’t know where the line is. My family, how I was raised, my education at SCU, all reinforced my being able to see that line.”

I, too, attended a Jesuit university, albeit a few years later than Panetta. I do not recall learning anything there that would’ve disabled me from making the distinction between the proper use of and abuse of sex. Panetta has now crossed that line without apparently being able to see it. Under the cover of “diversity,” he is publicly endorsing actions that are contrary to the faith he purportedly holds, to say nothing of its effect on military discipline. He is now part of the rationalization for this moral misbehavior – making wrong into right. That is what rationalizations demand – acquiescence, and then cooperation. He has given his.

I have no problem believing that homosexual Americans have sacrificed for their country. I’m equally certain that alcoholic Americans have also done so. It is their sacrifice as Americans that should be honored. What is the point of celebrating their behavior as homosexuals, or as alcoholics, if not to promote homosexual or alcoholic behavior? The one is as absurd as the other.

What I particularly enjoyed was Sister Farley’s explanation for why her book contradicted the teachings of the Church: “I can only clarify that the book was not intended to be an expression of current official Catholic teaching, nor was it aimed specifically against this teaching. It is of a different genre altogether.” I wonder how this comports with her religious vows.

It reminds me of a situation somewhat like this. Let us suppose that at a country club, a golfer decided all of a sudden to play the eighth hole in the opposite direction. In other words, he teed off at the green and aimed for the tee. Let us then suppose that he was approached and remonstrated with by the rules committee of the club. His Sister Margaret response might be: “Oh, but I wasn’t playing the hole as a member of the club.” To which the rules committee could reasonably reply, “But you are a member of the club and you’re playing at the club.” He might respond, “Actually, I didn’t intend to play golf, but something else. This is of a different genre altogether.”

In which case, the rules committee could remind the errant member that he had agreed to the rules when he joined the club and that, if he no longer wished to abide by them, he should leave. Why is the Catholic Church the only “club” whose rules may be traduced by those who still insist on the right to remain its member?

This is the stuff of comedy. It’s like a giant pratfall – not a person falling, but an entire culture slipping on a banana peel. Laughing at it is really the only fun left in a degenerate era, which turns out not to be so much fun after all. In fact, it is extremely dangerous to the health of one’s soul.

The forces of social convention enlisted on the side of the rationalization of moral misbehavior are very powerful. Because of them, no one can now serve as a Secretary of Defense, or indeed of any other government agency, without endorsing Gay Pride Month. If you insist on publicly maintaining moral principles, you are officially part of the problem.

Why is it so very important not to be changed by this? What is the price of assent to and collaboration with Gay Pride? The answer is clearly spelled out in Romans 1. Saint Paul describes a situation eerily like our own in which those “who changed the truth of God into a lie and worshiped and served the creature rather than the Creator” fell into “shameful affections. For their women have changed the natural use into that use which is against nature. And, in like manner, the men also, leaving the natural use of the women, have burned in their lusts, one toward another: men with men, working that which is filthy…” So those, “Who, having known the justice of God, did not understand that they who do such things, are worthy of death; and not only they that do them, but they also that consent to them that do them.” (Italics added) Gay Pride is that consent, the price for which is the death of your soul.

How to deal with this? A Jewish midrash has it that the inhabitants of Sodom and Gomorrah were violent and godless, given over to every sort of sexual depravity, and even killed their own children. Abraham preached against them. They would not change, but he would not stop. One day a stranger approached him and asked, “You began preaching here so long ago. Yet no one has listened to you. Why do you continue?” Abraham replied, “At first I spoke out to change them. Now I speak out so that they do not change me.”

Books related to the topic of this article may be found in The Imaginative Conservative Bookstore. Essays by Robert Reilly may be found here.

Robert Reilly has worked in foreign policy, the military, and the arts. His most recent book is The Closing of the Muslim Mind: How Intellectual Suicide Created the Modern Islamist Crisis. This article originally appeared on MercatorNet and is published here with the author’s gracious permission.

About the Author: Robert Reilly

Robert R. Reilly (born 1946) is a writer and senior fellow at the American Foreign Policy Council. He is the author of several books, including The Closing of the Muslim Mind: How Intellectual Suicide Created the Modern Islamist Crisis, Surprised by Beauty: A Listener's Guide to the Recovery of Modern Music, and Making Gay Okay: How Rationalizing Homosexual Behavior Is Changing Everything.