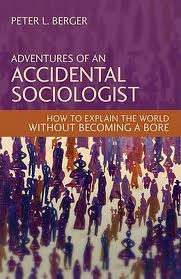 Adventures of an Accidental Sociologist: How to Explain the World Without Becoming a Bore, by Peter L. Berger. Prometheus Books, 2011.

Sociology was invented in the nineteenth century by the French philosopher Auguste Comte, who envisioned a “science of society” in which religion was replaced by rationalism and the polity was ruled by experts. Comte intended the discipline to be a new “religion of humanity” and an instrument to further radical political ends. Yet the career of Peter Berger, one of America’s best-known sociologists, shows that the discipline need not be ideological or anti-religious, and that the study of society can be as humanistic as it is social-scientific.

Mr. Berger is best known for The Sacred Canopy (1967), which critiques what is known as the “secularization thesis,” the theory, promoted by Max Weber and Emile Durkheim (among many others), that as societies modernize, they necessarily secularize. Mr. Berger found that rather than simply secularize, societies pluralize: Religious traditions multiply in modern societies but they do not necessarily diminish. What increases is the individual responsibility to choose one of those traditions, or none. The expectations of utopian secularists and militant atheists for a Comtean world are exaggerated. It was a prescient point considering the half-century that followed The Sacred Canopy’s publication.

Readers of Adventures of an Accidental Sociologist may not be surprised to learn that Mr. Berger at one point intended to pursue a religious career—briefly attended a Lutheran seminary in the early 1950s—rather than an academic one. Berger was born in Vienna in 1929 and emigrated with his family to New York when he was eighteen after World War II. He worked full-time during the day and took night classes at the New School for Social Research—which had, since the late 1930s, become a refuge for scholars fleeing the Nazis.

Mr. Berger’s sociological approach is derived as much from French novelist Honoré de Balzac as from Weber and Durkheim; his scholarship is humanistic and almost novelistic in style. In his memoir we come to understand how this style developed.

After he received his doctorate in 1954, the author led a peripatetic life—ideal for the training of a sociologist. He taught at various colleges and universities, including a stint at Boston University under legendary president John Silber, as well as a period as a “social worker” while serving his stint in the army in Georgia. Chapter titles like “From Mbulwa [South Africa] to Gütersloh” in Germany give some sense of Berger’s travels. He also spent time at the Mexican redoubt of the Catholic-anarchist intellectual Ivan Illich, whose never-ending discussions and seminars attracted countercultural types of all persuasions, from barefooted German activists to French Protestants and dissident Catholics. Illich wanted to understand the relation between the sociology of religion and “the nature of modern consciousness”; Berger ultimately concluded Illich, despite his au courant appeal, “did not like modernity” and preferred the Middle Ages, while Berger was interested in “a critique of modernity and in reform of its institutions, but not replacing these with quasi-Gandhian arrangements in education, healthcare, and local government.”

Eventually Mr. Berger settled back at the New School, and in 1966 he and Thomas Luckmann wrote The Social Construction of Reality. The book examined the interaction between reality “out there” in the world, and how individuals internalize their experience. They argued, broadly, that sociology allowed one to distinguish objective and accurate interpretations from false ones, because at bottom there are facts that are recordable and able to be discussed with others. The book led some radicals in the heady 1960s to conclude that Mr. Berger thought reality was “constructed” and had no objective existence. Here the author dispels that notion; there are real facts, even if those facts can be interpreted differently. As for the postmodern notion that reality does not exist, only “narratives” or stories about reality: “this corresponds very neatly with a definition of schizophrenia, when one can no longer distinguish between reality and one’s fantasies.”

Throughout the 1960s and 1970s, Berger continued to travel and revise his ideas: Mexico and South American but also Africa where, at the invitation of a Viennese think tank he began looking at indigenous paths to economic development. In Asia in the 1980s encounters with a Chinese Malaysian spirit temple and a group of well-behaved Korean schoolboys demonstrated to him the complex combinations of religion, ethics, and culture in that part of the world. He became convinced, over the years, that capitalism provided a better way to bring people out of poverty than socialism or central planning, a conclusion he incorporated into The Capitalist Revolution (1986). Like so many left-leaning intellectuals in the Reagan years, Mr. Berger was moving to the right.

Mr. Berger became close in these years to Richard John Neuhaus, the leftist Lutheran pastor who later became a Catholic convert and editor of First Things. Together in 1977 they published To Empower People, which discussed the importance of the “intermediate institutions that stand between individual life and the megastructures of a modern society,” such as the state, the economy, or vast government bureaucracies or corporations. These mediating structures help create and sustain social and economic stability.

Yet some twenty years later Mr. Berger broke definitively with Neuhaus when First Things published a 1997 symposium on the legitimacy of the American political system. The symposium implied, to Berger, that Supreme Court decisions were rendering the American political system illegitimate. Mr. Berger found this so unpalatable that he resigned from the journal’s editorial board. He and Neuhaus remained friends, but “the old camaraderie could not be restored.” This is too bad because, despite this disagreement, Berger still seems aligned with Neuhaus on other cultural questions—and because the jury is still out on whether that symposium was too strident, or prescient.

Today Mr. Berger is out of step with some contemporary trends in sociology, and not only because of his (relative) conservatism. He is not a “quant,” who reduces sociological data to numbers, and he does not advance sociological theories for ideological purposes. Mr. Berger believes that sociology is “value free” only in the sense that a sociologist must objectively collect data: The applications of the data cannot be removed from larger moral concerns, what the author calls an “overarching moral consensus.”

Books mentioned in this essay may be found in The Imaginative Conservative Bookstore. Reprinted from The University Bookman, Winter 2012 with the gracious permission of the author.

About the Author: Gerald Russello

Gerald Russello is the Editor of the University Bookman and author of The Postmodern Imagination of Russell Kirk.