A Fine Book on Political Economy: Toward A Truly Free Market 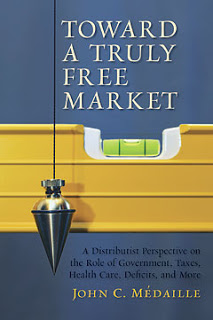 Our friends at ISI Books have recently published a very interesting new book on the political economy entitled Toward A Truly Free Market. Author John Médaille describes the theme of the book this way:

“Economics, or more properly, political economy, cannot be a proper science unless it is a humane science; to be a humane science it must embody some notion of justice, and particularly of distributive justice. Indeed, as a practical matter as well as a theoretical one, there can be no balance between supply and demand without distributive justice; the moral question and the economic question are, in reality, one question.”

ISI describes the book thus: “For three decades free-market leaders have tried to reverse longstanding Keynesian economic policies, but have only produced larger government, greater debt, and more centralized economic power. So how can we achieve a truly free-market system, especially at this historical moment when capitalism seems to be in crisis?

The answer, says John C. Médaille, is to stop pretending that economics is something on the order of the physical sciences; it must be a humane science, taking into account crucial social contexts. Toward a Truly Free Market argues that any attempt to divorce economic equilibrium from economic equity will lead to an unbalanced economy—one that falls either to ruin or to ruinous government attempts to redress the balance.

Médaille makes a refreshingly clear case for the economic theory—and practice—known as distributism. Unlike many of his fellow distributists, who argue primarily from moral terms, Médaille enters the economic debate on purely economic terms. Toward a Truly Free Market shows exactly how to end the bailouts, reduce government budgets, reform the tax code, fix the health-care system, and much more.”

John Médaille’s approach is very much in the tradition of Chesteron, Belloc and Fr. McNabb. He has a fresh and expanded approach to their views of political economy which deserves our attention. The passage from Toward A Truly Free Market below certainly describes our current economic crisis.

Economic equilibrium cannot be divorced from economic equity, and the attempt to do so will lose both equity and equilibrium; the economy will be unable to balance itself, and so will either fall to ruin, or to ruinous government attempts to redress the balance.

ISI also posted an excellent short interview with the author of “Toward A Truly Free Market” on ISI Books.