Among the Paynim: Afghan Women & Power 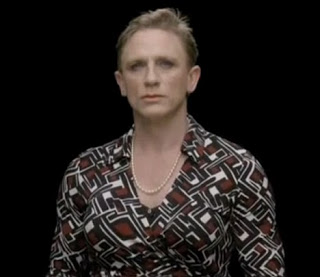 Daniel Craig, an actor who plays James Bond as a spiv, demonstrated what many people suspect about British men anyway when he turned up in drag. He protested gender inequality on March 8, International Women’s Day, and it was a first for him having never been seen in public shorn of stubble. Dependably, the British Public pulled the rug out from under his Jimmy Choos by stating that ‘sexism’ is no longer an issue in the UK.

The Daily Mail reported: “Most women do not believe that Britain is a sexist place, a poll has revealed. Fewer than four in ten say they have experienced derogatory remarks or behaviour because of their gender. And the majority of men and women think both sexes are equally capable of handling challenging and traditionally male tasks (while)… most women are far more concerned with solving day-to-day practical problems in their lives than fighting a battle for equality.”

Good enough, for as a child I overheard a 1960s cocktail party where university-educated, American men and women pondered whether the weaker sex was emotionally stable enough to hold high public office; and the ladies were far from certain. That was when Lady Thatcher had already sat on the front benches in Harold MacMillan’s Conservative Government, and then joined the Conservative Opposition Treasury team arguing that Socialist Harold Wilson’s wage and price controls would distort the economy. Different cultures, different pace.

In Afghanistan progress for women comes, but comes slowly to rural areas. Roughly as many girls as boys go to school and, in the Shia minority, women regard voting as a religious obligation as well as a civic one. But in a culture where everything that really matters happens inside the extended family, Afghan women wield a lot more power than their foreign well-wishers believe.

Haji Kamran came to lunch at my Peshawar office for the sixth day running, and despite being one of the most powerful of the Afghan resistance commanders fighting the Soviet Red Army over the border, he looked decidedly wan. He explained that he was going to get married, polygamously, to a second wife.

“Why’s that?” I asked mischievously.

“Many Afghans have been killed by the communists, my wife is past child-bearing age and I have the financial means, so I consider it to be my patriotic responsibility,” he lied.

At Haji Kamran’s request, his brothers had identified a young war-widow and they arranged the marriage with her menfolk: no Afghan man proposes marriage for himself because rejection would be an insult. Obviously, nobody asks the intended bride because she is just a woman after all, and the future husband is reluctant to inform his first wife (if he has one) for even though she remains at the top of the household pecking-order it reduces her prestige. Indeed, they had not notified any of their womenfolk in order to ensure harmony for as long as possible, but eventually they had to confess so that the women could cook food for the wedding guests and prepare their finery. This had happened six days before, hence my friend’s daily appearances at lunch. He looked bad.

“My wife is taking this a little hard,” he explained, “so for the time being I’m sleeping on the couch in my office where there isn’t much to eat.” After telling him that he was always welcome to dine with me, I asked if he could stay with his brothers and their families. “Their wives like my wife, so their houses are out of bounds too,” he sighed. What about his dad and mom? “Mom likes my wife a lot,” the valiant and even fearsome commander added ruefully.

Between his lumpy sofa and but one good meal a day, Haji Kamran deteriorated for another two weeks until the wedding. Tradition and family honour were at stake, so everyone could be expected to play his or her part perfectly. We expected not to see him for a while, but the next day he came back.

“My first wife and my second wife met and they really like one another,” the bridegroom explained helplessly, “and they agree on not liking me so I’m still sleeping on the office couch. What’s for lunch?”

One might think that the new wife would have faced resentment after moving in with an extended family of strangers, but no. After all, the new wife had no say in the matter and she was doubtless a good person from a good family, and Afghans make the best of things. So, the score against Haji Kamran stood at two wives, six sisters-in-law, and mom, not to mention a legion of lady cousins, other female relatives, and household servants. I offered him our office couch for the foreseeable future, but he said that he was growing accustomed to the lumps in his own office couch. He wasn’t.

We watched him decline week by week, lunch by lunch. That roguish twinkle had long left his eyes, but now a gray pallor tinted his sunken cheeks. His genuine warmth and ready wit, deployed everywhere from the Peshawar Governor’s mansion to the smallest shops in the back of the bazaar, were nowhere to be seen. I began to hint that he see a doctor when one day there returned the tiniest glimmer of his former self. He had declared, unto all his brothers, that having two wives was such a fine thing that he would pay for a grand wedding for any of them wishing to marry again. I stared at him dumbfounded, as though he were a lemming reaching terminal velocity.

“Look, I’m no expert on Islam,” I began, “but if a holy warrior dies fighting foreign invaders, then he is shaheed, a martyr, and he goes straight to Heaven without having to wait for Judgement Day, right?” He nodded. “But there’s no special break,” I continued, “if you get killed at home with a cast-iron frying pan wielded by your first wife, your second wife, your mother, your six sisters-in-law, or all of them working in unison.” He nodded again with somewhat less optimism. I said that we friends all adored him, but if he was truly determined to shuffle off this mortal coil, mightn’t it be wiser to rush the Soviet barricades than to make this suicidal announcement?

“Trust me,” he mumbled unconvincingly, “I know what I’m doing.”

And he did: within days he was back at home with his two wives, his children, and his extended family as if there had never been any trouble. Dozens of the womenfolk, maybe more than a hundred, turned every ounce of their surveillance and interrogation skills on his six brothers, trying to see if one of them was considering Kamran’s offer. A brother might return from a brief trip to the bazaar to buy a newspaper, but the herd was on him: had he met that nice doctor from Mardan, the one with the unmarried daughter? How about that Afghan lady dentist who practices in the Cantonment? And on and on as the great commander crept into the kitchen and made a cup of tea.

Very few Afghans are polygamous, and educated urbanites still arrange their weddings but with a lot more transparency and female choice. Since Afghan families discovered television in exile, many now have their own sets and satellite dishes tuned to the outside world, so expectations rise and opportunities follow. Meanwhile, the smart money bets on Afghan women.

Books on the people and topics discussed in this essay may be found in The Imaginative Conservative Bookstore. The Imaginative Conservative applies the principle of appreciation to the discussion of culture and politics—we approach dialogue with magnanimity rather than with mere civility. Will you help us remain a refreshing oasis in the increasingly contentious arena of modern discourse? Please consider donating now.