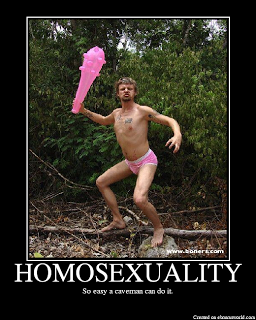 Archaeologists have discovered what they call a “transsexual or third-gender grave” supposedly containing remains of the first identified homosexual caveman. Needless to say, this has captured the imagination of British journalists, particularly those who were educated in boarding schools.

The Neolithic male skeleton in Prague, identified as homosexual because it is buried in a type of grave described as female, may be the clearest example of being unable to say “the Czech is in the male.”

Opportunities for once-in-a-lifetime puns aside, the archaeologist, Katerina Semradova, got her media-grabbing headlines right but then began to weaken her own assertions. The Daily Telegraph explained: “She said that archaeologists had uncovered an earlier case dating from the Mesolithic period where a female warrior was buried as a man.”

Wait a minute: is Ur-lesbianism the clearest explanation? If those Mesolithic people had different kinds of graves for warriors versus non-combatants, then a warrior woman would have been buried beside her male soldier-colleagues (just as some future archaeologists may wonder why a minority of American females are buried alongside of so many males in Arlington National Cemetery).

So, a few modern scientists think that primitive people buried their dead according to “sexual orientation,” but maybe the ancients had different criteria: maybe all men born on the Vernal Equinox were buried as women while all women with red hair were buried as men. Maybe 4.5% of corpses were mandated by Neolithic Law to be interred among the opposite sex in order to promote “concepts of gender-balance” in the afterlife. Maybe when someone died, elders eviscerated a pigeon and if the insides looked greenish he got buried in the other graveyard so as not to annoy the god in charge of handing out haemorrhoids. Nobody knows.

The story continues: “Siberian shamans, or latter-day witch doctors, were also buried in this way but with richer funeral accessories appropriate to their elevated position in society…But this later discovery was neither of those, leading us to believe the man was probably homosexual or transsexual, Semradova said.”

While there are similarities among shamans worldwide, I am not familiar with any tradition of them buried as women. Nor is it clear that ancient Prague shamans had to be buried like recent Siberian Buryat shamans: (“Sorry, Fritz! Look in the manual. It says that lady shamans are buried with the gentlemen, gentleman shamans are buried with the ladies, and hermaphroditic shamans we cut in half and bury twice”).

Ancient women, we are told, had lower status than men, so why bury your high-class shamans in a low-class manner, and then decorate their corpses with “richer funeral accessories appropriate to their elevated position in society”? It sounds a bit confused.

Perhaps the corpse was a heterosexual shaman who died during an economic slump, so mourners decided to scrimp on his burial finery: or that he was such a hated pest and a bromide that he was lucky to be buried at all. Or the ground was frozen solid and the only dug grave was in the Ladies’ Section.

If this does not prove troglodytic homosexuality (there is no cache of Neolithic Barry Manilow albums, stone catalogues of soft-furnishings or cave walls daubed with holiday receipts from Key West), what about this excavation implies transexuality?

Primitive mankind worked out tooth-extraction, crude bone-setting and brain-trepanning, plus a few other useful procedures in addition to herbal medicines. But reconstructive surgery on human genitalia, using flint implements without anaesthetic, is thought to be a somewhat less than ideal experience for the patient. That makes some sense to me. But it is all conjecture, since the dear-departed’s own, biological, ‘soft-furnishings’ have decomposed over the past 2,500 years and leave only bone.

Of course, if so-called transexualism is a predilection instead of a post-surgical condition—what they mean by a “third gender,” one supposes—then this will be hard to verify without a Ouija Board: (“Wearing mink pelts just felt like, you know, more natural to me than dressing up in all that butch, untanned, musk-ox leather. I was, like, you know, a Neanderthalette trapped in the body of a Neanderthaler…”).

“Go figure,” as our caveman, Og, might have said (although possibly after asking everyone to call him Brenda).

While this scientific advancement may be classified among Mr. Rumsfeld’s ‘known unknowns,’ it is surely an amusing example of how presumably competent scientists debase themselves for the media publicity that leads to more and bigger government grants. It is also shows what reporters and editors know is interesting to modern audiences of hoi polloi.

Books on the people and topics discussed in this essay may be found in The Imaginative Conservative Bookstore. The Imaginative Conservative applies the principle of appreciation to the discussion of culture and politics—we approach dialogue with magnanimity rather than with mere civility. Will you help us remain a refreshing oasis in the increasingly contentious arena of modern discourse? Please consider donating now.