Honorary Doctorate of Humane Letters for OUR Russell Kirk, 1957 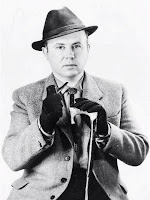 The teaching of ‘enduring values’ was called yesterday the true end of a university by Dr. Russell Kirk. In 1957, St. John’s University (New York City—not to be confused with the colleges in Annapolis and Santa Fe) awarded Russell Kirk a Doctorate of Humane Letters.

The New York Times reported on the speech Kirk, then holding a position in the political science department at Long Island University, delivered. I’m not convinced that the summation offered by the reporter is correct, but let’s hope the quotes are accurate.

He deplored the pursuit of more trivial goals by some American institutions of higher learning, ‘which are often unworthy of the name.’

Dr. Kirk, author and research Professor of Political Science at Long Island University, spoke of the meaning of a university and of higher learning at the eighty-seventh commencement of St. John’s University in Queens. He said detractors of lasting standards who applied the same norms to men and creatures ‘do not have the slightest notion of the norms by which we come to know the law divinely decreed for man’s self-government.’ Comprehension of standards that elevate humanity, he observed, is the only part of a university’s training that ‘will survive the tooth of time.’

In this light, he maintained, the study of the humanities should be undertaken in their ‘full and native vigor,’ which will produce a temperate man because he has a disciplined mind. Asserting that through the study of great thoughts, the lives of great men, theology, philosophy and history the humane person is formed, he went on: ‘The humane person is a conformist not to fads and foibles and appetites of the hour but to eternal truths. The university enjoins conformity to truth and declares that the truth about human nature has long been known to wise men, who have apprehended human norms.’ . . . .

[A Doctor of Humane Letters] was given to Dr. Kirk, who was cited for ‘cogently exposing the errors of confused liberalism and corrosive radicalism.’