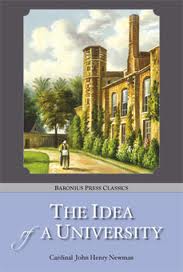 The secular university in the United States has reached a long-deferred moment of truth and ought to be ripe for the wisdom of John Henry Newman. Looking at the university today, its overextension, confusion about its purpose, catastrophic funding decline, and fundamental ineffectiveness for so many students, Newman could very well say, “I told you so,” though he would be too much the gentleman to say it. Unfortunately, Newman is not on the intellectual map for most administrators and professors, and even if he were, I doubt that his Idea of the University would be taken seriously. To fully comprehend the loss this entails, one must start with the current mess.

For illustrative purposes, I offer the situation most familiar to me, that of California State University at Fresno, where I teach. Over the last several years, the CSU budget has been cut by $1.5 billion. In the long term, I believe, Fresno State will deal with this funding decline mainly by attrition because it is easier than making programmatic cuts: retiring tenured faculty members will be replaced by the non-tenured; class sizes will increase as class-sections decrease, tuition will skyrocket; low enrollment courses will disappear, making popularity ever more the arbiter of course offerings.

Consider the university’s doubtful financial future with these statistics from Academically Adrift: Limited Learning on College Campuses (University of Chicago Press, 2011), by Richard Arum and Josipa Roksa. Based on the Collegiate Learning Assessment test, the authors found that 46 percent of undergraduates demonstrated “no improvement in critical thinking, complex reasoning, and writing skills in the first two years of college, and 36 percent showed no progress in four years.” The Intercollegiate Studies Institute has been documenting “negative learning” outcomes in American government and history for several years, showing that between their freshmen and senior years, undergraduates at Yale, Princeton, Duke, and other prestigious universities lost knowledge about their country. None of these statistics will be surprising to teachers in the CSU system, where we have juniors and seniors who cannot write understandable English or comprehend what they read.

Newman provides the best answer to the question, “What went wrong?” In 1851 Newman responded to the request of Paul Cullen, the Archbishop of Armaugh, to deliver a series of lectures on the university, especially dealing with the issue of “mixed education” of Roman Catholic and Protestants in secular universities. Newman’s lectures became The Idea of the University. He made three essential points, the validity of which has become all too obvious.

Newman’s first point is that truth is one and coherent, and by definition, a university must teach all disciplines for truth to be comprehensible. Therefore theology had to be included. By this Newman did not mean religious studies: anthropologic treatments of religion as a human phenomenon and its role in human history or the Bible as literature. He meant the study of God. If God existed as a fact, no institution claiming to teach all fields of knowledge could leave out the study of God without putting the coherence of all knowledge in danger. For Newman, this meant the study of Catholic dogma.

Newman recognized three main opponents to his position: atheists, who did not believe that God as a subject for study existed; romantics, such as Schleiermacher, who argued that religion was essentially feeling; and Protestants who held to the doctrine of “private judgment,” which leaves the meaning of the bible to the individual. In the first case, there was no subject to study; in the later two, no subject that could be rationally constituted.

Newman becomes prophetic when he describes what will happen when theology is removed from the university:

If you drop any science out of the circle of knowledge, you cannot keep its place vacant for it; that science is forgotten; the other sciences close up, or, in other words, they exceed their proper bounds, and intrude where they have no right.

Take theology out of the university and other disciplines will set up shop as theologies. Matthew Arnold, watching the ebb tide of Christianity, was among the first to propose a replacement: “There is not a creed which is not shaken, not an accredited dogma which is not shown to be questionable, not a received tradition which does not threaten to dissolve. . . .The strongest part of our religion today is its unconscious poetry,” and “Most of what now passes with us for religion . . .will be replaced by poetry.” Thus, Arnold gives Schleiermacher entrance through the back door of what will be the modern English department.

Other fields competed. Psychology offered up the mythos of Freud, Jung, then B. F. Skinner as global answers to the human question; the social sciences, Marx; biology, Darwin, all based on a materialist metaphysics, unprovable by science and, mainly, unexamined. The university has followed Laplace’s dictum that God is a hypothesis it does not need, but other gods have inevitably arisen. For the post-modern, corporate university, the talismans are “diversity,” “multi-culturalism,” “tolerance,” and, hollowest of the hollow, “excellence.” With all this competition to be the village explainer, curricular coherence ultimately foundered: there has been no agreement on what human beings are or what they are for. This brings us to Newman’s second point.

The end of a liberal education is to train the mind and the best foundation is the study of classical languages supplemented by mathematics. These subjects were difficult. They required steady application and patience—studying them built character. Classics brought students into contact with the fundamentals of human experience. The benefits of such an education were a “properly trained mind,” one characterized by “good sense, sobriety of thought, reasonableness, candor, self-command, and steadiness of view,” as well as the “force, the steadiness, the comprehensiveness and the versatility of intellect.” One who possessed a liberally trained mind could enter “with comparative ease into any subject of thought,” and take up “with aptitude any science or profession.” The kind of mind Newman wanted to his students to build is perhaps best illustrated by his description of how an ideal tutor teaches:

His maxim is ‘a little but well’; that is, really know what you say you know: know what you know and what you do not know; get one thing well before you go on to a second; try to ascertain what your words mean; when you read a sentence, picture it before your mind as a whole, take in the truth or information contained in it, express it in your own words, and if it be important, commit it to the faithful memory. Again, compare one idea with another; adjust truths and facts; form them into one whole, or notice the obstacles which occur in doing so. This is the way to make progress; this is the way to arrive at results; not to swallow knowledge, but (according to the figure sometimes used) to masticate and digest it.

In contrast to the methodical and strenuous approach of Newman, General Education, which constitutes the liberal arts portion of education in California and makes the community college system interlock with the CSU and UC systems, offers a Home Town Buffet of individual consumer experiences. In its “critical thinking” component, Fresno State serves up twelve courses, among them: “Critical Thinking: Gender Issues,” “Critical Thinking in Chicano and Latin American Studies,” “Critical Thinking about Race,” and “Critical Thinking in Anthropology.” Students are required to take one of the twelve. You don’t have to be a good halfback to do a broken field run through our GE program to evade education; it is harder to go through it and get one.

Newman’s third point: real education can only occur in a community dedicated to learning.

The general principles of any study you may learn by books at home; but the detail, the colour, the tone, the air, the life which makes it live in us, you must catch all these from those in whom it lives already . . .

What Newman has in mind is the residential college system of Oxford whose backbone was the individual tutor. Newman himself was a tutor. C. S. Lewis spent most of his academic career as one. Although universities try to address the problem of community with more seriousness than any other issue Newman considered, the battle is uphill all the way, especially at a commuter campus such as Fresno State. It will only get worse as faculty numbers thin, students increase, and we turn more and more to “distance learning” as an alternative.

As Newman well knew, education has its own built in set of laws. Heeding such laws may mean both that liberal education can be done only on a small scale and that it is not for everyone. These are difficult truths for the current educational establishment to accept, but it may not have a choice. In California and elsewhere, we can expect the university to shrink, but that it will shrink into something more coherent is rather to be hoped for than expected.

Books on the topic of this essay may be found in The Imaginative Conservative Bookstore. Reprinted with the gracious permission of The University Bookman. The Imaginative Conservative applies the principle of appreciation to the discussion of culture and politics—we approach dialogue with magnanimity rather than with mere civility. Will you help us remain a refreshing oasis in the increasingly contentious arena of modern discourse? Please consider donating now.

About the Author: Craig Bernthal

Craig Bernthal received a JD from the University of Washington Law School in 1975 and a PhD from Michigan State University in 1988. He has been a professor of English literature at California State University since 1988, specializing in Shakespeare and Renaissance literature. His interdisciplinary interests include law, ethics, religion, and literature. His books are The Trial of Man: Christianity and Judgment in the World of Shakespeare (ISI) and a collection of short stories, Perfection in Bad Axe.