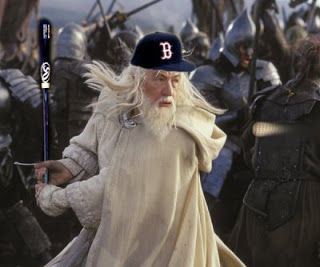 The handsome youth climbed unsteadily onto a nearby picnic table and began to sing, waving his arms in abandon as the afternoon sun reflected off of the fine silver embroidery on his elven cloak.

“Four and twenty virgins came down from Inverness,” he roared tunelessly, “and when the ball was over there were four and twenty less…”

“The son of Prince Legolas,” muttered one of the hobbits. “Everyone calls him Prince Legless which he surely is, and by the look of it on his fifth firkin of hard-cider.”

“Pity that we cannot go home for another hour,” grumbled his companion squinting at the late afternoon sun. “The traffic won’t let up until the orcs stop protesting cuts in their entitlement programmes. Strider! What ho! You’re late.”

The tall wiry fellow sat down, threw back the hood of his cloak and helped himself to a cold but ultimately unsatisfying can of Meadweiser. “Apologies, chaps,” he explained, “I was strip-searched again under the Homeshire Security Act. Those dwarves can be a little rough.”

“Sorry,” said one of the hobbits sympathetically and the others nodded.

“Lady Galadriel was supposed to join us, but she’s playing a concert tonight in the Lothlórien Heights Elvindrome,” the furry-footed creature continued. “She’s never been the same since she started calling herself Lady Gagadriel and took to wearing cellophane blouses.”

“She’s getting a bit old for that if you ask me,” another grumbled.

“I blame it all on Sauron,” said the first hobbit.

“Well, you voted for him,” another objected. “You fell for all that New Mordor crap.”

“We gotta move with the times,” the smallest hobbit explained. “Wraiths are people too. It was only our bigotry that drove them to be somewhat unpleasant. Society is guilty but change we can believe in.”

Strider sighed and hurled his empty can across the garden and into the mandatory recycling bin. Middle Earth was not as fun as it used to be.

“Given up your pipe?” asked the smallest hobbit.

“Yes, anybody have any rolling papers?” asked Strider and one of his companions offered him some. Soon, tiny and rather anaemic smoke-rings rose in the darkening sky amid the sound of coughing.

“I spoke with Gandalf,” he said in between gasps and the hobbits all craned toward him for the news.

“How is he? Where is he? What’s he doing?” they all asked in unison.

Strider shook his head sadly. “I’m not sure how smart he was to move back from the Undying Lands,” he explained. “His insurance coverage is all screwed up and MordorCare doesn’t want to pay for his treatment. He is more than 2,000 years old, you remember, and President Sauron’s medical reforms do call for some rationing.”

“The government is bust,” admitted one of the hobbits. “The tax-wraiths have taken every piece of elvin silver out of Rivendell. If they ain’t got it, they can’t spend it.”

“That bothers him,” Strider continued, “plus his nurses park him all day in front of the television and he loathes the trendy game-shows in particular. He says that dwarves never look very good in the nude.”

“What does he think about the war? The new War of the Rings?” asked one of the hobbits.

The small, formerly-merry creatures all nodded sombrely, interrupting one another to ask whether it was necessary, how it could be paid for and whether it could even be won, especially considering the thousands upon thousands of newly-discovered rings that the president claimed had imperilled Middle Earth.

“Gandalf thinks it’s stupid,” Strider explained. “And he’s right. A war against ring-around-the-collar? Gimme a break! When was the last time that you guys washed your jerkins?” He called for a passing waitress to bring the bill.

“Sorry but we don’t accept cash,” she explained. “Any of you got a MordorCard?”