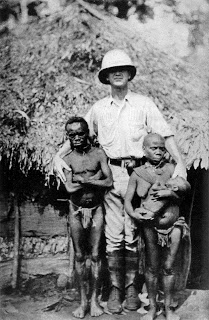 “Now’t as queer as folk,” is a Yorkshire expression meaning that nothing is as strange as people. It may upset some readers to learn just how strange and why.

Village women in Uganda mystified and confounded some foreign aid workers, a young Zambian once told me. A fellow specialist in communication, he hastened to add that he was not responsible for the debacle.

The Ugandan ladies had to walk far to the river, lugging home all of the water that their families used to drink, cook or wash; altogether a tiring five-mile journey every day. The nice aid workers ran a plastic pipe from the river to a hand-pump installed in the centre of the village, then rounded up all of the ladies and showed them how it worked. They thought that the problem was solved, but on the next morning the village women picked up their tins, jerry-cans and buckets and trudged down to the river as always, as if the pump never existed. So when the ladies returned, the nice aid workers herded them together again and repeated the demonstration, the women watched and nodded attentively, and on the next morning they walked down to the river once more. The ladies seemed perfectly sensible to the aid workers, but yet these Africans persistently ignored the simple technology. Demonstrations failed several times more, until one of the smarter foreigners condescended to ask the women why.

“It’s really quite simple,” the ladies explained. “You have no idea how much scheming and plotting are required to keep this village running. There are completely unsuitable marriage proposals that must be nipped in the bud; arrogant husbands or brothers who need to be taken down a peg and petty arguments that require mending. This can only be done by women, this takes us time, and we can hardly do it with all these foolish men eavesdropping. So, just as our great-great-grandmothers did, we govern our village during our trips to the river. Your nice pump, by the way, threatens our community and our entire way life, but thank you for the kind thought.” So, the chastened foreigners moved the pump a mile away and everyone lived happily ever after.

Another type of cross-cultural misunderstanding occurs over symbols which virtually every American, Canadian or European would take for granted.

French volunteers designed a language-free poster to alert non-literate Afghan refugees to the dangers of abandoned, Soviet, anti-personnel mines. A minor masterpiece, it would have made a splendid “heavy-metal” rock album cover or a tattoo for bikers: a menacing, multi-coloured cobra coiled around a small, common mine. It took time to convince the UN to test the graphic, and finally we handed copies to a small crowd waiting outside a clinic and asked the Afghans what it meant. “Easy!” they exclaimed, “It’s a snake. Step on it!” Back to the drawing-board.

My own informal researches into the same matter were less dramatic but equally informative. Non-literates won’t puzzle over a written message which they already know that they cannot read, any more than you would bother to study a newspaper in Chinese or Arabic if you cannot read those languages. So the Frenchmen had been correct in attempting to convey their warning with graphics alone. But graphic symbols are learnt just as language is learnt, and Afghan peasant ladies did not understand Western images. Why would they?

A skull-and-crossbones, that common international symbol for danger, was interpreted by Afghan patients waiting at our women’s clinics as indicating a village graveyard where loved ones might be buried, a safe and pleasant spot. Moreover, they failed to understand linear perspective, just as a European medieval peasant may have done. Viewed on a full-figure cartoon a tiny land-mine was too small to notice, but when we drew the mine in the foreground and made it relatively larger than the human approaching it, our clients laughed, asking, “If a mine is as big as a sheep, what kind of idiot would tread on it?” Good point.

Unfamiliar with books or magazines, Afghan peasant ladies did not know whether to leaf through the comic-book pages left-to-right in the Western style, or right-to-left in the Muslim tradition. We finally printed the material on one-side only, stapled at the top, removing the options apart from reading sequentially from the top page to the bottom. We solved the perspective problem by printing the pages in black-and-white, with only the anti-personnel mines in colour.

Despite their different religion, languages, culture and funky headgear, Afghans are first-cousins to Europeans and most Americans. They are closely related to us through our shared Indo-European roots, closer by blood and tongue than Semitic language-speakers of Hebrew and Arabic. We share many core values and taboos, although sometimes in different priority, and we laugh at the same jokes. To see how intrinsically different we humans can be, we must look further afield and hereafter it starts to get strange.

Not only do humans learn languages, and come to interpret symbols just as some of us learn to read words, but how we interpret any visual information is also conveyed by experience and/or teaching. While we all have similar eyes and brains, the cognitive connection between the two organs seems to be acquired and not innate, and so perceptions are not always identical across our species. The pygmies provide a dramatic example.

In about 1960, the anthropologist Colin Turnbull lived among the Mbuti pygmies deep in the rainforests of the Congo. Along with a pygmy friend, he set off on a long journey to the vast Congolese savannah where none of his hosts had ever been before. After days of walking through the thick jungle, they came to the plains where his companion pointed into the distance and asked, “What kind of insects are those?” Turnbull squinted and replied that they were not insects: they were cattle grazing some hundreds of yards away. His pygmy friend laughed. “Very funny!” he exclaimed, “Pull the other leg!” (or the equivalent in Mbuti). The pygmy, raised lifelong in thick jungles, had never seen anything further away than a few yards and he had confused size with distance, mistaking far-off cattle for closer insects.

Pygmies, of course, are virtually identical to us apart from being shorter: their brains, eyes and neuro-systems are the same as ours. So, over a few days on the broad savannah, Turnbull’s pygmy companion learnt the knack of distance-vision that we acquire much earlier in our lives.

Similarly, many humans learn that peculiar colours and shapes spread across a flat background represent Grandma at her birthday party: we call it a photograph and we learn to decipher it while maps, being more abstract, take extra effort. Like perception over distances, reading photos and maps are acquired skills.

Non-human mammals such as dogs, with eyes and brains not dissimilar to ours, do not always share our learned ability to interpret flat images on a television set: sometimes they stare mystified until an image of another dog appears on the screen, and then they bark or wag a tail. Yet house-pets that are initially alarmed by moving reflections in a mirror soon abandon their fear and fascination, so to a degree they acquire that perceptive skill as do humans. Just as people learn, dogs could probably be taught to watch television (but then they might tune in to The Animal Channel and hide the remote-control).

Digression aside, it often stuns me to realise that the pleasant foreign person with whom I share a pot of tea may physically perceive things so differently than do I. When we travel or live abroad we tend to interact with the globalised “nomenklatura,” a New Class united by common media, attitudes, economic forces and general experiences: yet far from the office or the hotel cocktail-bar the differences may be immense, if hard to notice at first.

Believed to possess the same immortal souls and demonstrably sharing the same physical hardware, we humans look much the same but our similarities often belie enormous differences in values or priorities, in underlying presumptions and occasionally in our direct sensory perceptions of the world around us.

Yet Americans, in particular, often persist in believing that we are all fundamentally identical and that we all share the same values in the same priorities, want the same material culture, and prize the same social or governmental systems. This is chiefly because their research-sample is small, mostly comprised of neighbours like themselves, immigrants who arrived while already holding typical American values, and perhaps an “exotic” English-speaking foreigner whom they met in Cancun.

Too many folk remain unaware that there is “now’t as queer as folk.”