Dinner with Newt? A TIC Colloquium

Republican presidential hopeful Newton Leroy Gingrich was asked to name six people with whom he would most like to have dinner, and The Imaginative Conservative invites its readers to do the same.

Unconventionally, the question did not specify a single dinner party so the former House Speaker can presumably dine with each of his guests individually. Being traditionalists, we will stick to the usual formula of you, your spouse (or “spousal equivalent”), plus six guests for one supper.

An online poll asked Mr. Gingrich to name his six, and then lets visitors compose their own invitation lists. He replied,

That’s three inventors, one scientist, a politician and a film-director, all relatively modern figures: all bar one died in the Twentieth Century.

No one is invited from earlier times; from Classical Greece to the Renaissance, from the Enlightenment to America’s Founders through America’s Civil War. No religious leaders such as Moses, Buddha, Jesus, Mohammad or even Joseph Smith (Mr. Mitt Romney was not polled), nor philosophers from Aristotle to Thomas Aquinas to Burke, Wittgenstein or even Noam Chomsky. No Pericles, Plato, Plutarch, Saints Peter or Paul, Peter the Great, a roomful of popes named Pius, Paul or John Paul, or a few English kings named Plantagenet, just drawing at random from names starting with the letter “P”.

The mind boggles, particularly since the host is a self-described historian. Maybe he thinks that he has read everything already, but surely a cheeseburger with Thucydides, or a salmon mousse with Frederick the Great, or ham salad with John Adams, or kebabs with Suleiman the Magnificent would be tempting. Apparently not enough.

On the guest-list we find no artists, architects or composers. No writers or poets either: Shakespeare sits at home uninvited, spurned for merely a tolerably good director who, one supposes, shot some of the host’s favourite movies. Mr. Gingrich prefers the guy who made “Stagecoach” to, say, the guy who carved the Pieta. One recalls Hermann Goering saying, “When I hear the word ‘culture’ I reach for my revolver.”

Perhaps culture, history and wisdom matter little to an allegedly dynamic, self-styled modern man-of-action who prefers practical matters including science.  Darwin would be interesting, but more so than Leonardo or Copernicus, Newton or Boyle, Linnaeus or Fleming, Crick or Einstein? Maybe the former Speaker always wanted to visit the Galapagos, or longs to alienate the Creationist vote.

His horde of inventors is more perplexing still. One must presume that, in an exercise such as this, long dead and recently resurrected guests have kept up with current affairs from Paradise, otherwise they would monopolise the conversation catching up on the last umpteen centuries. Long after the dessert, then, Mr. Gingrich would still be trying to explain Facebook to Edison and TSA to Orville and Wilbur (although he may enjoy himself talking).

Besides, how interesting would an inventor be, explaining what well-known problems he saw and his clever solutions that we already know? (“I felt my windpipe vibrate while making rude noises for my children, and I wondered if I could preserve the sound on a wax cylinder…”). With another guest-list the host could turn away to chat with Saint Augustine, or even Lady Gaga.

Why the Wright Brothers and why both of them, for goodness’ sake, and at the expense of not having Galileo? If you want brothers, at least the Marx Brothers had different personalities. Is it rude to invite only one? (“Sorry, Wilbur, we didn’t bring Orville back to life because we wanted Steve Jobs?”). What could one brother say that the other could not? (“No, you are being forgetful again: it was not a No. 5 wrench, it was a No. 4!”). A few minutes of that and the host would retreat to the kitchen to watch Edison disassemble the microwave. 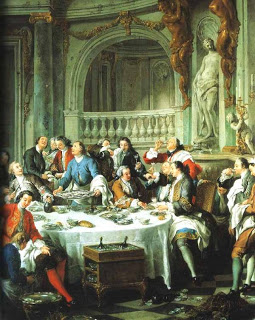 When political celebrities are asked similar questions there is ever a temptation to play to the cheap seats. Asked their favourite food, Ronald Reagan replied macaroni and cheese, and Margaret Thatcher said poached eggs on Marmite toast: plain-folks’ fare and possibly even true. But what politician would have dared to say Beluga followed by pheasant-under-glass, washed down with a gargle of Pétrus? So are these the guests with whom Mr. Gingrich truly longs to dine?

He may have given a politician’s calculated reply, choosing recent notables whom even modern Americans could recognise, biased towards “problem-solving,” brainy inventors who reflect his intended image. We will not know. Besides, whatever his real desires, no audience would have identified Pico della Mirandola, and he could hardly have admitted to wanting a candle-lit supper with Miss Marilyn Chambers, the late porn-star.

The public chose differently, albeit in a self-selected and unscientific forum. So far, their top six are (in order), Lincoln, Jesus, Einstein, Washington, Martin Luther King Jr. and Franklin (Reagan comes seventh).

They all sound more interesting than Mr. Gingrich’s choices, with the possible exception of Churchill. Moreover, again apart from Churchill, the public picks sound like better dinner companions: Lincoln was a first-rate raconteur, and Franklin would be especially good company with witty, informed and wide-ranging conversation. While Ben calls for (lots) more claret and recalls happy days among the philosophers and courtesans of Versailles, elsewhere in the restaurant the former Speaker could learn what kind of baling-wire best holds a biplane together.

And to be fair, the candidate could be discomfited by General Washington’s, Professor Einstein’s and Dr. King’s questions on his foreign policy and human rights positions, and Our Lord’s opinions on much more. Only with Lincoln might he get off easy (“Yeah, I never liked that habeas corpus stuff either!”).

In terms of the body-politic, this is a useful exercise despite the former Speaker’s unsatisfying list. Dinner guests may tell us more about a candidate, his focus and values than listening to misleading speeches or ambiguous sound-bites. If a candidate were wired up to a polygraph machine while reading his guest-list, maybe all other pre-election events could be suspended.

In this way we might have been spared two presidential terms of Richard Nixon (“Let’s see, Nero’s good fun, and Heliogabalus. Mustn’t forget Caligula…”) and the same of Bill Clinton (“Selma Hayek, Angelina Jolie, Monica and that check-out girl in the 7-11 on K Street. Also that brunette that the state troopers found in Little Rock, you know, the one with the big, um, hair…”).

If we at TIC revert to the standard version of picking six guests for a single supper party, it all becomes more complicated.

Does one mix artists and scientists and scholars, men of action and moral or religious leaders together, when one type may not have much in common with the others? If so, is William Penn going to get along with Elvis and Erwin Rommel?

If one chooses all guests from one category does the conversation go stale? When Christ makes an observation while passing the port, what if Buddha, Mohammad, Guru Nanak, Krishnamurti and Lao Tse only nod and smile serenely?

Similar for extroverts versus contemplative folk: does one invite Benvenuto Cellini and Emily Dickenson? What about brilliant but egotistical monologists? (“And if Werner ‘Smarty-Pants’ Heisenberg will let me get a word in edgewise…”). Can a distain for “gender balance” supersede the immutable, cosmic rule of girl-boy-girl-boy seating? Would the Moghul Emperor Babur (“No pork for me, please!”) mind using the restroom at the top of the stairs?

These problems become your problems as you nominate six guests for dinner, all real people whether dead or alive. If you have a basic theory (say, all philosophers, or good conversationalists only) then please reveal it.