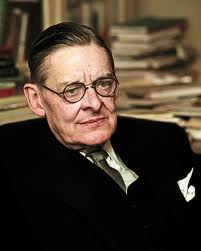 “First of all no art, and particularly and especially no literary art, can exist in a vacuum. We are , in in practice, creatures of divers interests, and in many of our ordinary interests there is not obvious coherence.” (598)

“I do not suppose that there ever has been, or will be, a critic of any art, whose appreciation was a separate faculty, quite judicious and wholly isolated from his other interests and his private passions: if there was, is or will be, he was, is or will be a bore with nothing at all to say.” (598)

“But this apparent paradox–this need of aiming at one thing in order to do another–this apparent gospel of hypocrisy or self-deception, is right, it is in the nature of the human soul and embodies its need and craving for perfection and unity. We do tend, I think, to organize our tastes in various arts into a whole; we aim in the end at a theory of life, or a view of life, and so far we are conscious, to terminate our enjoyment of the arts in a philosophy, and our philosophy in a religion–in such a way that the personal to oneself is fused and completed in the impersonal and general, not extinguished, but enriched, expanded, developed, and more itself by becoming more something not itself.” (598-599)

“The one extreme is to like poetry merely for what it has to say: that is, to like it merely because it voices our own beliefs or prejudices–which is of course to be quite indifferent to the poetry of the poetry. The other extreme is to like the poetry because the poet has manipulated his material into perfect art, which is to be indifferent to the material, and to isolate our enjoyment of poetry from life. The one extreme is not enjoyment of poetry at all, the other is enjoyment of an abstraction which is merely called poetry. But between these extremes occurs a continuous range of appreciations, each of which has its limited validity.” (599)

“And what poetry proves about any philosophy is merely its possibility for being lived,–for life includes both philosophy and art.” (601)

“Yet we can hardly doubt that the ‘truest’ philosophy is the best material for the greatest poet; so that the poet must be rated in the end both by the philosophy he realizes in poetry and by the fulness and adequacy of the realization. For poetry–here and so far I am in accord with Mr. Richards–is not the assertion that something is true, but the making that truth more fully real to us; it is the creation of a sensuous embodiment. It is the making the Word Flesh, if we remember that for poetry there are various qualities of Word and various qualities of Flesh.” (601)

“What we find when we read Lucretius or Dante is that the poet has effected a fusion between that philosophy and his natural feelings, so that the philosophy becomes real, and the feelings become elevated, intensified and dignified.” (601)

“Poetry cannot prove that anything is true; it can only create a variety of wholes composed of intellectual and emotional constituents, justifying the emotion by the thought and the thought by the emotion: it proves successively, or fails to prove, that certain worlds of thought and feeling are possible. It provides intellectual sanction for feeling, and esthetic sanction for thought.” (602)–“ Poetry and Propaganda,” The Bookman (February 1930): 595-602.

For more books on or by T.S Eliot visit The Imaginative Conservative Bookstore.

About the Author: T.S. Eliot

Thomas Stearns Eliot (1888–1965) was an essayist, publisher, playwright, literary and social critic, and "one of the twentieth century's major poets." Born in St. Louis, Missouri, in the United States, he moved to the United Kingdom in 1914 and was naturalized as a British subject in 1927. Eliot wrote some of the best-known poems in the English language, including The Waste Land (1922), "The Hollow Men" (1925), "Ash Wednesday" (1930), and Four Quartets (1943). He was also known for his seven plays, particularly Murder in the Cathedral (1935) and The Cocktail Party (1949). He was awarded the Nobel Prize in Literature in 1948, "for his outstanding, pioneer contribution to present-day poetry."