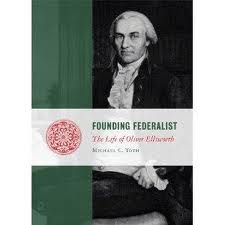 When American schoolchildren study the Constitutional Convention, they typically learn a few names—Madison, Randolph, Patterson, Washington—and few main events—the formation of the legislature, the Three-Fifths Compromise, and the creation of the presidency. The first event is usually called “The Great Compromise” that melded Madison’s Virginia Plan and Patterson’s New Jersey Plan into a bicameral legislature with an upper house of equal representation and a lower house determined by population. Rarely, if ever, do they learn that Connecticut delegate Oliver Ellsworth was the primary mover who made this compromise a reality. Though Ellsworth’s name may be forgotten, Michael C. Toth’s elucidating biography presents the enduring contributions of this pivotal and esteemed founding father to the Constitution and to all three branches of the federal government.

Oliver Ellsworth was “neither a partisan firebrand nor the leader of a powerful faction. He was a moderate, a conciliator, a principled man who often sought compromise.” His positions as state judge, delegate to the war-time Congress, Constitutional framer, original senator, chief justice of the Supreme Court, and special presidential emissary all were shaped by his “electoral federalism,” which Toth traces to his upbringing in Connecticut, a state with a “quasi-federal system of government” due to its independent and church-centered towns. Ellsworth’s federalism, in turn, grew from the pragmatic political theology of New Divinity Calvinism, which “offered a theological justification for governing through incremental steps, reserving bolder maneuvers for when a majority of the polity supported sanctioning an isolated crop of dissenters.” This brand of Congregationalism, which descended from the First Great Awakening of the 1740s, also “provided a profound reason to seek broad compromises that protected the nation from external threats and internal strife.” The preservation of political harmony was Ellsworth’s constant goal throughout his career in public service and, according to Toth, Ellsworth’s religious faith was the source of this goal.

After five years of tutoring by a leading New Divinity minister and studies at Yale and Princeton, Ellsworth studied law and was admitted to the Connecticut bar in 1771. When the Revolution broke out in 1775, Ellsworth joined most of his native state in support of the American cause. In 1777 at age thirty-two he was nominated as one of Connecticut’s seven delegates to the Continental Congress. His experiences serving on the congressional appeals court and handling Congress’s war debt gave him “a firsthand glimpse of the disharmony that had come to characterize relations between the several states,” which led him “to believe that individual states needed to cede some of their authority in order to provide for the ‘common defense’ of all the states.”

Ellsworth brought these experiences to Philadelphia in 1787 as one of Connecticut’s three delegates to the Constitutional Convention. His chief accomplishment was his central role in bringing about “The Great Compromise,” which Toth labels “The Connecticut Compromise” since Ellsworth’s colleague Roger Sherman proposed the plan of equal Senate representation while Ellsworth took on “the role of persuader in chief.” When the delegates at last agreed to this compromise, which gave the fledgling document its constituent shape, Ellsworth was one of five men chosen to write the first draft of what would become the Constitution “of the United States,” a phrase coined by Ellsworth. The newly revised government, in Ellsworth’s words, was “partly national, partly federal,” and it brought about national harmony by recognizing “that the unity of the American people existed on two levels: among the people as Americans and among their separate states.” Ellsworth’s pragmatic approach to federalism did have a negative side: he opposed outlawing slavery because he wanted to ensure the Constitution’s ratification by the southern states. In Toth’s judgment, Ellsworth’s “toleration of slavery was the unfortunate cost of national harmony.”

When the Constitution was signed, Ellsworth returned to Connecticut as the leading voice for ratification, and he penned a series of pro-ratification essays under the pseudonym “Landholder.” Unlike Madison, Jay, and Hamilton’s more famous Federalist Papers that were given to theoretical analysis of the new government, Ellsworth’s essays appealed to the emotions of readers, underscoring the safety and unity that the new Constitution provided all Americans. His essays were also informed by his New Divinity Calvinism, which led him to see the hand of God in the Convention and the preceding governmental chaos that brought it together. Toth, a practicing lawyer, carefully analyzes and clearly details the issues debated during the ratification conventions, including the relation between the federal and state governments and the nature of judicial review.

After the Constitution was ratified, Ellsworth was selected by the Connecticut legislature to serve as one of its original senators. Toth confines his narrative of Ellsworth’s seven-year career in the Senate to his two chief accomplishments: the drafting the Judiciary Act of 1789 and the securing of the Jay Treaty with Great Britain in 1794. Article III of the Constitution left the establishment of lower federal courts to Congress. In the most detailed section of the book, Toth again employs his legal expertise to describe how Ellsworth immediately stepped forward to complete this task: he devised the bill that established federal district and circuit courts, including the types of cases each would hear and their relationship to the state courts. He also compromised with the Anti-Federalists in defining the limits of the Supreme Court’s appellate power. Toth concludes that the bill “has the essential marks” of Ellsworth’s “consensus-driven moderate Federalism.” Five years later Ellsworth’s drive for moderation and for national harmony made him a leader within the “Friends of Peace” who petitioned President Washington to negotiate rather than fight another war with Great Britain. Ellsworth and several federalist colleagues persuaded the president, outlined the terms of the agreement, confirmed John Jay as envoy, and brought about its ratification despite protests by bellicose Congressmen.

By this time Ellsworth was one of America’s most respected and trusted public figures. It took no one by surprise when Washington nominated him as the third chief justice of the Supreme Court in 1796. Ellsworth’s most famous ruling came in 1798 when he upheld the legality of the Sedition Act by appealing to the body of common law, an opinion that for Toth “was consistent with his general approach throughout his political career. He sought civic harmony in the proper balance between central authority and local autonomy. His jurisprudence offered something to his era’s proponents of national security and to defenders of democratic civil liberties.”

In 1799 Chief Justice Ellsworth was sent to France as a special emissary of President Adams to negotiate a settlement with France during the “Quasi-War” being fought at sea. Although it was his first diplomatic assignment, Toth maintains that Ellsworth’s career-long commitment to “the critical questions of national independence and domestic harmony” helped him achieve a secure peace that Adams regarded as the crowning achievement of his presidency. After his successful mission, Ellsworth resigned from the Supreme Court in 1800 to return to Connecticut, where he became involved in state politics until his death in 1807 at the age of sixty-three.

Toth’s eloquent biography, peppered with quotations from Ellsworth’s contemporaries, historians, and from Ellsworth himself, brings to life an august founder who today is only acknowledged indirectly through his lasting achievements. In Toth’s analysis Ellsworth’s religious faith, the lens through which he viewed politics, served as the leitmotif underpinning the founding father’s political philosophy and governmental actions. While contemporary Americans tend to separate religion from politics, Toth argues that “Ellsworth’s theological convictions were often the very reason why he proved to be politically influential” because it gave him a religious pragmatism “that steered him—and often his colleagues with him—toward a lasting consensus.” Toth concludes that Ellsworth “was responsible for making possible the lofty designs of the better-known founders.” It is Toth who is responsible for making Ellsworth and his remarkable career better known to America today.

Books mentioned in this essay may be found in The Imaginative Conservative Bookstore. Reprinted with the gracious permission of the University Bookman.