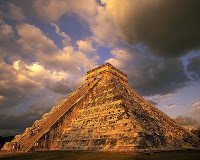 The world is supposed to end this Friday (or possibly on Sunday, or not any time soon) coinciding with the expiration of the Mayan “Long Count” calendar, which at 5,125 years-old survived considerably longer than did the Mayan civilisation. (Don’t smirk: your local Wal-Mart sells processed cheese slices that may outlast Western Civilisation by a decade or more, even without refrigeration).

A NASA film and academics argue that the Mayan calendar was merely meant to roll-over into another version, just as we chuck out an old Garfield calendar annually and hang up a new one (although it gets harder to find those President James A. Garfield calendars nowadays).

But what if they are mistaken?

We are, after all, imaginative and we are conservatives, and Edmund Burke warned that we cannot always perceive the wisdom in tradition. Maybe the old dead Mayans are right and we’re heading up (Winnie the) Pooh Creek without a paddle? New evidence suggests that it is possible.

Okay, while French New Agers fight for apocalyptic front-row seats on mountaintops, the surviving Mayans aren’t exactly panicking. In one report, ethnic Mayan-owned hotels in the Yucatan, and major Mexican breweries, advertise imminent doomsday as an excuse to party (as well they might), while

Mayan priest and farmer Petronilo Acevedo Pena says God may punish humanity someday, because people have stopped going to church. “When people planted their corn fields 50 years ago, everybody from all the towns around would pray” for good harvests, he said. “But when the government started giving out aid, seeds and fertilizer … what do the people do now? They go to the government to ask for help.”

He sounds like the local campaign chairman of Mayans for Mitt, but he doesn’t expect retribution any time soon.

However, London’s Daily Telegraph blogger Tim Stanley sees worrisome indications of what wicked things are written in the sky, and,

…now that the evidence is stacking up, I’m starting to think more seriously about heading for the nearest magic mountain and hunkering down with some baked beans and a shotgun. Consider these…portents of doom: 1. The North Koreans have released photos of a successful rocket launch into space, which confirms our worst fears: they’ve finally mastered photoshop…2. UFO sightings are up, although only in parts of America populated by drug-addled hippies…(and) NASA has denied that the Armageddon is coming, which makes me suspect that it almost certainly is. If the Obama administration issues a statement to the effect that everything’s okay and there’s no need to panic, that’s your cue to head for the hills.

Scoff if you will. New translations of the Mayan Dresden Codex, which (as every schoolboy knows) was likely given by Cortes to Charles I of Spain, seem to predict bizarre occurrences to precede the Mayan apocalypse, and they are not to be dismissed easily. This website’s Mayan Studies Department (in-house and small but highly competent) decoded the warnings, and have left some text in the original Mayan (phoneticised from the pictograms) for our readers who insist upon it.

Ba’al u tia’al ya’ab, máake’ ma’ u tia’al mix máaki’, or “What is for many (is) not for anyone,” says the Codex, and Ma’ tu páajtal k-tsikbal yéetel ba’alche’ob, or “We cannot talk to animals.” In the marginalia written by the Mayan rabbinate, they predict that; “otherwise sensible elders will legalise human sex with animals (Mayan: ye/YE), and then ban it again because the animals find it offensive.” It may sound too weird for words, yet that is precisely what is happening in Germany.

The (UK) Guardian newspaper reports, “Germany is to introduce a ban on bestiality with a revision of animal welfare law that will reverse a decision in 1969 to legalise zoophilia.” The nicer word “zoophilia” implies a fun day out with the kids feeding peanuts to an elephant, and not, well, strange Uncle Max and Mitzi the Rottweiler.

How splendidly reassuring it is, for we traditional conservatives, when an ideology goes to war with itself. Germany’s 1969 decision to legalise bestiality was based on (let us say somewhat) extreme sexual liberation theory, and the upgrade which repeals it is based on even more Progressive notions of animal rights; even though no Herr Doktor Doolittle has “talked to the animals” (much less re-released The Sound of Music song about “The Lonely Goatherd”).

Now, German animal lovers (in the very narrowest definition) threaten to sue, to stop the callous state from breaking up their, um, happy families.

The Codex continues: U jach nojochil k’aas ti’ le k’aaso’obo’, ba’ate’ yéetel ba’alche’ob, or “The greatest evil of all evils (is) dealing with animals.” Presuming that we can guess what the authors meant by “dealing,” a commentator has added the Mayan equivalent of “no shit, Sherlock!”

Strange doings are certainly afoot, and as Hunter Thompson wrote ominously (but with characteristic lack of clarity), “The pig has entered the tunnel!”

Tak le jmiiso’obo’ u k’aat u xaanabo’ob, le  ch’o’obo’ u yeexo’ob, or “Even cats want shoes and mice calzones,” says the Codex. Commentators add: “A woman who inflates and shrinks like an enraged Hoffman’s Sloth (Latin: Choloepus hoffmanni) will promote dinner-parties (Mayan: WAXAK) to celebrate the End of Time, although she has clearly eaten too much already.” The respected Biloxi SunHerald confirms, “Oprah Winfrey’s website got into the act by publishing a list of ‘Apocalypse Dinners.’ It says: ‘Whether the world is really ending or whether you’re just having a busy week, these six make-ahead meals…freeze well and feed many.’” That may secure a suitably large single ration for the celebrity talk-show hostess, but what about the other guests?

Another commentary predicts, “Official high priests will be banned from marrying men to men, even though many of them rather fancy the idea, while other faiths that forbid such unions will be permitted to do just that.” This describes modern England, where Prime Minister David Cameron has declared that religions opposed to gay marriage, such as Catholics, Muslims and many Jewish denominations, can soon elect to perform single-sex unions or refuse (until the EU court over-rules and forces them too, critics warn) while one of the bigger proponents of the so-called reforms, the Anglicans, will be banned from it. As Quetzalcoatl used to say, “Vey es meer already! Go figure!”

Je’ek’ab le máabeno’, tak le jach ma  j-si’ipilo’ j-ookol, says the Codex, or  “(Who) opens the drawer to the most honoured is (also) a thief,” (catch the implication that the most honoured people are thieves). Mayan theologians added: “The wisest men will believe that making limitless coins from paper (Mayan: amatl, or fig-bark covered in lime paste) will make their peasants rich beyond limit.” One’s imagination need not stretch to recognise Mssrs. Obama, Geithner, Krugman and Bernanke.

Mix máak u yoojel máax tia’al ku meyaj, writes the Codex, or “Nobody knows for whom he works,” while the Mayan priests add: “Long-nosed pale-skinned people, settling in the North, will dunk their believers in water and handle snakes (Mayan: KA’AN-na) as worship. They will predict a Great Rapture (Mayan: na-ku) in which they will be carried off to Paradise while the rest of us are left behind. These mentally-infirm products of first-cousin marriages, the bearers of enormous goitres, will be toast like everyone else.” This sounds pretty clear to me.

Time to fill the basement with MREs and cases of beer? I’d say skip the ghastly freeze-dried food but the beer won’t spoil. And maybe go to church and light a candle; that effort is never wasted.

Books on the topic discussed in this essay can be found at The Imaginative Conservative Bookstore.