The Grotesque Iconography of Lady Gaga

This Sunday marks the fourth week of Advent; in a week, it will be the feast of the birth of our Lord. My mother has been blasting Christmas music. In between choir boys singing “Silent Night” and Bing Crosby, the radio DJ told his audience that the number one performer of 2010 is Lady Gaga.

Lady Gaga is more than a manufacturer of pop music and catchy tunes. She came into the music scene two years ago, infecting the senses and causing a strong urge to move it-move it with her first single, “Just Dance”—closely followed by more hits: “Poker Face,” “Paparazzi” and “Telephone” (with Beyonce). She has become, in the most secular use of the term, an icon. Her image is a mosaic: outrageous, loud, provocative, creative, and unabashedly out there.

Just to get an idea of how culturally embedded Lady Gaga is, let’s use the technology litmus test. Of her 21 uploaded videos on YouTube, the lowest viewed video has over 1 million clicks and her highest is over 319 million (the music video for “Bad Romance”). At present, the LadyGagaVevo channel has 342, 426 subscribers and over a billion total upload views. She has over 7 million followers on Twitter and almost 25 million people “like” her on Facebook.

Now let’s compare Lady Gaga’s popularity to, say, the Roman Catholic Church, who has over a billion members worldwide. The Vatican has its own channel on YouTube. It has 900 uploaded videos, mostly excerpts of speeches by Pope Benedict XVI, translated by a voice over. The most viewed video has over 105 thousand views; the lowest has a few hundred. The Vatican joined YouTube on November 21, 2005 but only has 26, 392 subscribers. On Twitter and Facebook, its fans and followers are collectively below 12,000.

Perez Hilton, a celebrity gossip blogger, is a big fan of Lady Gaga. He is known for his “dictionary of celeb terminology/nicknameology,” says a friend of mine. One of his many nicknames for her includes “GaGalupe,” a clear reference to Our Lady of Guadalupe, a celebrated icon of the Virgin Mary. It can be supposed that Hilton calls her this because “Gaga” and “Guadalupe” both start with “G”—and, perhaps, because Lady Gaga was raised Roman Catholic and has publicly stated that she is currently celibate. This fact sends mixed messages, considering her provocative attire, and is an ironic and bold statement in today’s openly promiscuous society.

Lady Gaga’s videos are reminiscent of something Flannery O’Connor wrote in “The Fiction Writer and His Country.” She said, “When you can assume that your audience holds the same beliefs you do, you can relax a little and use more normal means of talking to it; when you have to assume that it does not, then you have to make your vision apparent by shock–to the hard of hearing you shout, and for the almost-blind you draw large and startling figures.”

Lady Gaga is a visually startling figure in today’s society, a modern symbol of female empowerment. Her celebrity revolves more around her projected image and “daring” performances on and off the camera. She is an advocate for the LGBT community. For World Aids Day, she “sacrifice[d] her digital life to fight HIV/AIDS.” She posted a video on her fan page to repeal DADT, which got 42,355 “likes” and 5,002 comments. Her latest album has 6 Grammy Nominations and won her the 2010 Billboard Award “Artist of the Year.” 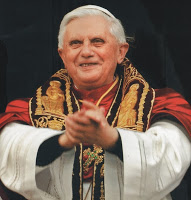 The Church’s leader, Pope Benedict XVI, on the other hand, is an intellectually startling figure. It’s not just his deep-set eyes and wry smile. He is the spiritual leader of over a billion people and successor of St. Peter. He coordinates his colors according to the liturgical calendar. A relentless defender of human life, he nearly caused riots in England. The pope’s comment concerning condoms and how they may be the first recognition of morality in male prostitutes was widely misconstrued, elaborated upon, and discussed. The Vatican recently criticized the Chinese government, calling their acts “unacceptable and hostile” and a “grave violation of their human rights, particularly their freedom of religion and of conscience.” The Church is heavily criticized, but Pope Benedict XVI’s adherence to the Church’s sacred tradition and the teachings of Jesus Christ gives hope in a spiritually poor world. He is, to many faithful Catholics, a kind of rock star; to the rest of the world, perhaps, an old fool.

Lady Gaga sings about losing her keys, communication issues, and love. The only meat she brings to the “Great Conversation” is the kind she wore as a dress to the 2010 MTV Music Awards. Her records have reached the #1 slot in most countries across the globe; the University of South Carolina now offers a class on her and the sociology of fame. She may be a celebrity, and therefore not comparable to a religious leader, but her popularity says something about the culture. It says people want something different and fascinating and intriguing. She is an icon verging on idol: people love her, want to know her, people want to be like her. 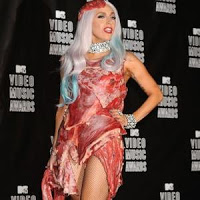 Lady Gaga is not the problem with society; the real problem is that more and more people are looking away from the wonder of God and religion to find meaning in their life. It seems it is no longer enough to be alive–people forget there is a dignity in existing. They have lost the delight found in thinking, smiling, suffering, and worshipping. Life becomes a fight for identity, instead of an enjoyment and appreciation. During her summer interview with Rolling Stone, Lady Gaga said, “When I wake up in the morning, I feel just like any other insecure 24-year old girl. Then I say, ‘Bitch, you’re Lady Gaga, you get up and walk the walk today.'”

Last November, the European Court of Human Rights said that crucifixes were no longer allowed in Italian schools because they breached the rights of non-Catholic families. Both the Catholic Church and the State protested, with Italy’s education minister saying that the cross is a “symbol of our tradition.” That ruling is currently being appealed, with the Greek Orthodox Church joining in the protests, fearful that this will set a precedent. Bishop Nicholas, from central Greece, argued that if crucifixes and icons are removed from classrooms, children will not have any worthy symbols to inspire and protect them; he thinks football and pop idols are “very poor substitutes.”

Pope Benedict XVI, when asked by a reporter of what he could do to make Catholicism appear more “attractive” and “credible” to secularists and atheists in Britain, brilliantly said,

“One might say that a church which seeks above all to be attractive would already be on the wrong path, because the Church does not work for itself, does not work to increase its numbers so as to have more power. The Church is at the service of Another; it does not serve itself, seeking to be a strong body, but it strives to make the Gospel of Jesus Christ accessible, the great truths, the great powers of love and of reconciliation that appeared in this figure and that come always from the presence of Jesus Christ. In this sense, the Church does not seek to be attractive, but rather to make herself transparent for Jesus Christ. And in the measure in which the Church is not for herself, as a strong and powerful body in the world, that wishes to have power, but simply is herself the voice of Another, she becomes truly transparent to the great figure of Jesus Christ and the great truths that he has brought to humanity…”

You see, Advent is still a season for hope; the latest YouTube video to go viral was one of flash mobs singing Handel’s “Messiah” in food courts, not another teenager singing Gaga. Blessed Pope John Paul II said that our whole lives must be Advents, preparing for Christ to come. Truth is not a popularity contest. Pop stars are sojourners too. As Wendell Berry says, we must live our life in a non-computable way. Even in Lady Gaga, there is a reminder of another icon, a real one, who sacrificed himself for our redemption. As Pope Benedict said in his homily on December 16th, a true appreciation for the Incarnation will “infuse courage in our lives.”

Books related to the topic of this essay can be found in The Imaginative Conservative Bookstore. The Imaginative Conservative applies the principle of appreciation to the discussion of culture and politics—we approach dialogue with magnanimity rather than with mere civility. Will you help us remain a refreshing oasis in the increasingly contentious arena of modern discourse? Please consider donating now.