Goodwill is Not Enough 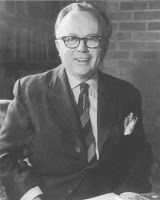 by Gordon Keith Chalmers —May 17, 1953 New York Times Review of “The Conservative Mind”

The author of The Conservative Mind is as relentless as his enemies, Karl Marx and Harold Laski, considerably more temperate and scholarly, and in passages of this very readable book, brilliant and even eloquent. All American thought, whether religious, political, literary, or ethical, should now be preoccupied with the recent intellectual blunder of this learned nation: the mistake in judging the nature and intentions of the present Russian Government. This mistake was made so consistently for two decades that when our politicians in the Nineteen Forties had to decided whether and how to deal with the Russians, they went wrong simply because they had learned too well the lesson taught by the most vocal and most heeded of the scholars. The seeds of the intellectual mistake lie deep – fully fifty years deep, perhaps a round hundred. Russell Kirk’s able and timely book examines the values and ethical illusions which produced the blunder.

Against the Hegel-Marx-Laski axis he analyzes and describes the affirmative tradition of Burke, de Tocqueville and Irving Babbitt. This is not a book about anti-communism but about anti-pre-communism.

However, it is not really an “anti-” book at all. “Conservatism is something deeper than mere defense of shares and dividends, something nobler than mere dread of what is new,” says Mr. Kirk. In a time when the activities of Senator McCarthy have deluded many thinking him a conservative, it is important to be exact about the nature of liberty and the conservative account of it. “The conservative,” says Arthur Schlesinger, Jr., “is a constitutionalist and therefore a libertarian.” “Political liberalism before the middle of the nineteenth century,” says Mr. Kirk, “(whatever may be said of economic liberalism) was conservatism of a sort: it intended to conserve liberty. The greater liberals were then imbued with the spirit of Burke.” One of these, Tocqueville, appears to us to have written about our own decade of Congressional investigations when he said: “In America the majority raises formidable barriers around the liberty of opinion.”

The Conservative Mind is history as well as argument. Familiar decades and political theories and controversies which usually, in our life time, have been illuminated by a searchlight from the left, are here revealed in unfamiliar highlights and shadows by Mr. Kirk’s dexter beam. Many clichés of current thought he here examines outside the philosophical prejudices of our generation: “the people,” “men of goodwill,” “social contract,” “human rights versus property rights,” “the intellectual.” The illusory “values” connoted by these terms are subjected by Mr. Kirk to dispassionate critical light. “Intellectuals” he calls “the most hideous and presumptuous of Marxist terms.” Of men of goodwill, he says: “Condorcet, Brissot and Mirabeau were men of good intention, learning, even genius; but they were metaphysically mad; they trusted in parchment and political gimcracks, regardless of the frailty of human reason, the corruption of human character, and the great dominant interests of civilized life. They insisted upon absolute liberty, or nothing; and they got the latter.”

The tendency of this scholarly book is especially salutary at the present time. Exception might be taken to one of its general lines of judgment, when a question arises over placing Coleridge, Paul Elmer More and T. S. Elliot on the broad central highway of the conservative tradition of Burke. In Coleridge, at least, Mr. Kirk rightly reveals a Platonist authoritarianism which is to be heard again in More’s religious books and the hierarchies of Mr. Elliot. Besides the metaphysical, many other traditions of working and particularized conservatism are analyzed in the book, among them the livelier and more humorous conservatism of de Tocqueville and Babbitt. The value of these two thinkers to contemporary thought lies not only in their clarity and warm human variety, but in their quality of ethical imagination. “In sober fact,” asks Mr. Kirk, summarizing Babbitt, “do men have souls, or do they not? Upon one’s resolution of this inquiry rests the basis of politics; for if men do not posses souls, if there is no higher will, then they may as well be treated parts of a machine – indeed, they cannot be treated otherwise.”

Mr. Kirk—a teacher at Michigan State College and the author of Randolph of Roanoke—is amply familiar with the present need for a transvaluation of values. His vigorous book analyzes the demand for this conversion of thought and describes the consequent rededication to human freedom by independent lovers of liberty throughout the past century of expanding democratic collectivism. It leads him to propose that intelligent and conscientious Americans agree upon a general plan of action centered in three high American virtues: a constitutional system generally more friendly to liberty than any other in our age; an amenity of conduct and disposition which pervades, despite exceptions, all orders of society; and a spirit of responsibility not yet senile.”

Mr. Kirk’s account of the ideas, decisions and beliefs that have produced these virtues merits the responsible attention of all informed persons who are not rattled by unpopular labels.

Books by Dr. Kirk may be found in The Imaginative Conservative Bookstore. The Imaginative Conservative applies the principle of appreciation to the discussion of culture and politics—we approach dialogue with magnanimity rather than with mere civility. Will you help us remain a refreshing oasis in the increasingly contentious arena of modern discourse? Please consider donating now.

Gordon Keith Chalmers was president of Kenyon College and author of “The Republic and the Person”.