A Song for Imaginative Conservatives? 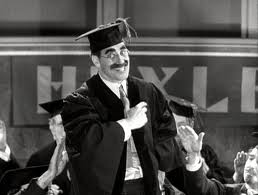 Before we begin, I am fully aware that most of us recoil at one-size-fits-all herd-activities and prefer our own individualistic, quirky tastes in music to anything applied collectively. Still, I wonder if a few popular songs might capture part of our essence. Your own suggestions will be welcome and, no doubt, better than mine.

Initially, I thought of Groucho Marx in “Horsefeathers” (1932), where as Huxley College president Quincy Adams Wagstaff he sings “Whatever It Is, I’m Against It.” This song has a trio of advantages.  It is easy to remember as opposed to, say, the libretto of Tannhauser. It encompasses an attitude toward change that, while not always apt, is hardly a bad default-position for reflective (and reflexive) conservatives. It also, in the context of the film, probably presents a balanced picture of (most) higher education in America then and now (do please note the college president’s line, “Like Shakespeare said to Nathan Hale, “I always get my man!”).

But we could do better, and I recalled Randy Newman’s darkly satirical “Political Science” song as a clear and instructive example of what we do not believe in: “Let’s drop the Big One and see what happens…”

“Boom goes London, boom Paree,
More room for you and more room for me;
And every city, the whole world round,
Will just be another American town…”
Then I realised that someone must have played this for Norman Podhoretz and he took it seriously: the so-called “Neo-Conservatives” probably sing this in dank cellars after they hold their secret rituals.
Just momentarily, I considered the Beach Boys’ jaunty, “Fun, Fun, Fun (‘Til Her Daddy Takes the T-Bird Away),” at least as an economic metaphor for Bush-Obama fiscal policy and the next twenty years of American history.

However, it contains undertones of rather silly hedonism not to mention authoritarianism (especially if Daddy is perceived of as being Government and not Natural Law). It is also, not that importantly, hardly a song to which I could recall Russell Kirk snapping his fingers as we motored up winter roads to Mecosta so long ago.

My irrepressibly funny friend, Grover Norquist, once cited an early blues/rock song that he said encapsulated most conservative American values. In “Boom, Boom, Out Go the Lights” (Little Walter and His Jukes), a man comes home from work, finds that his wife has been cheating on him and shoots her dead. Think about it: the virtues of holding a job, home ownership, community values, the Second Amendment, monogamy, the sanctity of marriage vows, etc. However, people might take it literally and not as a metaphorical celebration of traditional social mores.

My nomination may end up being “The Slow Train,” a touching English threnody that is probably unknown to Americans, a lament for the passing of history and community which was written and sung in the 1950s by Michael Flanders and Donald Swann. It mourns the innumerable, ancient little towns of rural England, each with its own curious name of which the meaning may have been long forgotten, cut off from rail service in the name of modernisation and efficiency by the Socialist Government of the day. (By way of trans-Atlantic explanation, sleepers are railroad ties and the slow train stopped at many small towns while the faster, express ones ran exclusively between cities).

Coda: decades after these so-called efficiency reforms it was learnt that government planners had falsified the data used to justify closing the rural stations; that many were profitable to the once-private railway companies being nationalised; and that government merely needed a political excuse of false economy to justify seizing private property. Thus they isolated towns that were for a century connected by rail, thus they drove the New Proletariat onto (then) state-owned buses and thus we ride forever more down vast, soulless, concrete motorways.

No doubt, as I said before, you can find better examples.