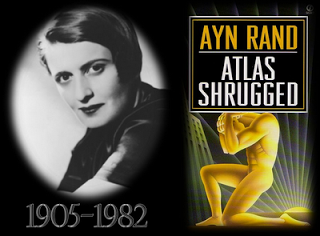 With today’s release of the film of Ayn Rand’s Atlas Shrugged, its appropriate to consider some of the reasons Bentley Hart gives us in his article “The Trouble with Ayn Rand” (found in the 2011 May edition of First Things) as to why we should avoid seeing this film. It’s especially important to consider these reasons given the recent attention Rand’s work has received in conservative circles. The trailer of the movie was not only unveiled at this year’s CPAC convention, for example, but Rand’s works are showing up at Tea Party rallies, and have been recommended by some “conservative” talk-show hosts, Glenn Beck, among them.

Generally, Hart argues, we should avoid contributing to the potential success of this movie, not only because the novel, Atlas Shrugged, is bad art, but because its message has the potential for poisoning our souls and constitutes yet another nail in the coffin of Western civilization. Besides, there’s another movie, according to Hart, we should see instead, one that promises to be more artistically beautiful as well as philosophically profound.

Following are some of Hart’s criticisms of the art and philosophy of Atlas Shrugged:

As for Rand’s artistic ability, Hart reviews a number of selections from her novels and concludes:

For what really puts both Atlas Shrugged and The Fountainhead in a class of their own is how sublimely awful they are. I know one shouldn’t expect much from a writer who thought Mickey Spillane a greater artist than Shakespeare. Even so the cardboard characters, the ludicrous dialogue, the bloated perorations, the predictable plotting, the lunatic repetitiousness and banality, the shockingly syrupy romance—it all goes to create a uniquely nauseating effect: at once mephitic and cloying, at once sulfur and cotton candy.

Additionally, as Hart argues, Rand’s vision of life is narrow and sterile, lacking any awareness of the reality of natural grace and “gift”:

There, of course, one has the essential oafishness of Rand’s view of reality. For her, the world really was starkly divided between creators and parasites, and the vast majority of humanity belonged to the ranks of the latter. “I came here to say I do not recognize anyone’s right to one minute of my life,” Roark continues, “nor to any part of my energy, nor to many achievement of mind.” Rand really imagined that there could every be a man whose best achievements were simply and solely the products of his own unfettered and unaided will. She had no concept of grace, even of the ordinary kind: the grace of an existence we do not give ourselves, of natural powers with which we could never have endowed ourselves, and of all those other persons on whom even the strongest among us are dependent. She lacked any ennobling sense that what lies most deeply within us also comes from impossibility far beyond us, as an unmerited gift. She liked to talk about “virtue” a great deal—meaning primarily strength of will and the value that one creates out of one’s own native resources—but for her the only important question regarding the relation between the individual and society was who had a right to what. That is, admittedly, a question that must be asked at various times, but it is never the question that true virtue— true strength—asks of itself.

And if one is a Christian, one should definitely be suspect of her view of life, so utterly opposed, as it is, to Christianity. Hart notes, for instance that:

She regarded its [i.e. The Sermon on the Mount] prescriptions as among the vilest ever uttered. I suspect that charity really is the only way to avoid wasting one’s life in a desert of sterile egoism. She regarded Christian Morality as a poison that had polluted the will of Western man with its ethos of parasitism and orgiastic self-obliation [much like, Nietzsche].

Of course, there is also Rand’s amateurish philosophy:

And really, what can one say about Objectivism? It isn’t so much a philosophy as what someone who has never actually encountered philosophy imagines a philosophy might look like: good hard axiomatic absolutes, a bluff attitude of intellectual superiority, lots of simple atomic premises supposedly immune to doubt, immense and inflexible conclusions, and plenty of assertions about what is “rational” or “objective” or “real.”  Oh, and of course an imposing brand name ending with an “—ism.” Rand was so eerily ignorant of all the interesting problems of ontology, epistemology, or logic that she believed she could construct an irrefutable system around a collection of simple maxims like “existence is identity” and “consciousness is identification,” all gathered from the damp fenlands between vacuous tautology and catastrophic category error. She is simply unaware that there was a genuine philosophical problems that could not be summarily solved by flatly proclaiming that this is objectivity, this is rational, this is scientific, in the peremptory tones of an Obersturmfuehrer drilling his commandoes.

For these reasons, Hart concludes that Rand promotes a barbarism that contributes to the demise of Civilization:

Civilization is always a fragile accommodation at best, precariously poised between barbarism on the one side and decadence on the other, and as civilization dissolves it begins to oscillate between them, ever more spasmodically, until the final collapse comes. Call it morbid curiosity on my part, but I often wonder where the debris of our civilization will ultimately be heaped; and, if this film portends what I fear, now I may know the answer. Rand was definitely on the side of barbarism.

But Hart’s article is not all negative. Apparently, there’s another movie soon to be released (he’s not clear about when, however), Terrence Malick’s The Tree of Life. According to Hart, Malick is the “greatest living filmmaker,” who has a profound sense of the beautiful. Admitting he hasn’t seen the film, Hart says that the “two minutes or so of clips that have been released are far more beautiful, moving, and profound than anything associated with the name of Ayn Rand could ever be.” The theme of Malick’s movie is two ways of life, “the way of nature and the way of grace,” and Hart suspects that the movie will go on to consider “whether these two ways can become one.” Further, based on what he’s heard, the answer to the questions the movie grapples with will have “something to do with love capable of embracing all things, and of both granting and receiving forgiveness.” Thus, Hart pleads with us to forego Atlas Shrugged and see The Tree of Life instead, a movie produced by a “remarkable artist who really does have something to tell us about both nature and grace (two things about which Rand knew absolutely nothing).” “So”, Hart urges, “make the wise cinematic choice here, for the good of your own soul, but also for the sake of a rapidly foundering civilization.”

About the Author: John Creech

John Creech is Lower School Dean at The Atonement Academy in San Antonio, Texas. He is also an attorney, licensed to practice law in Texas.