An Intelligent Tourist’s Guide to Hell 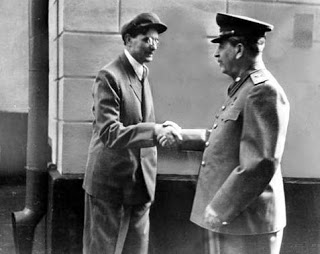 After 30 years as KGB archivist, Major Vasili Mitrokhin (1922-2004) gave British intelligence services 25,000 pages of classified Soviet documents dating back to the 1930s. The Mitrokhin Archive proved to be a goldmine for historians and among its treasures is a memorandum to Stalin from Mikhail Suslov (1902-1982), head of the USSR’s Central Committee Department for Agitation and Propaganda.

The architect of many purges, show-trials and executions early in his career, Suslov is thought by historian Roy Medvedev to have been made Stalin’s “secret heir,” and his name was for decades a synonym for any apparatchik responsible for murderous policy and scurrilous propaganda. In Suslov’s 1946 memo, we see a chilling glimpse inside of a brutal totalitarian state that murdered 50 million of its own citizens: where raw power, unrestrained and abused, eclipsed every last shred of morality and rule of law.

With the state’s domestic and foreign enemies in disarray, Suslov told Stalin that he had “a vertitable blank check,” giving the USSR “newfound advantages.” He bragged that “we have killed thousands around the world (and) the world cares not a whit…everything is on the table now and there are no self-restraints (sic)” from the state deploying an “assassination team…wherever it wishes,” and on to torture and the gulags.

Okay, this is a little white lie, as you have seen if you clicked on the second link in the first paragraph. The quotes come not from the KGB files, but from National Review Online, written not by Suslov but by someone named Victor Davis Hanson, who works not in the dank cellars of Lubyanka Prison but who teaches at America’s Hillsdale College and who holds another part-time job at The Hoover Institution. Yet there the dissimilarities end while the quotations and the sentiments that they portray are real, as you can see for yourself.

He writes, in part, that because

“the domestic antiwar movement is dead, kaput… Everything is on the table now and there are no self-restraints, no snickers on The Daily Show, no quirky insider winks on Letterman, no Barbara Streisand crazy faxes… without worry about a New York Times op-ed barrage or an ACLU lawsuit. That gives the U.S. newfound advantages, a veritable blank check, from keeping Guantanamo open indefinitely to using a Cheney “assassination” team and valuable water-boarded intelligence wherever it wishes to.”

In other words, for Mr. Hanson, government should operate with absolutely no constraints apart from the strength of its political opponents.

There is no need for rule of law in his world, no human rights domestic or foreign, no need for any procedures or protocols other than that which is deemed convenient or effective by some faceless state apparatchik whose identity is protected by layers of security-classification – so long as there is no coherent political opposition to catch him at it. There is no morality in Mr. Hanson’s world and apparently he sees no need for morality whether it be based upon religion or philosophy, tradition or law. In Mr. Hanson’s view, which he apparently teaches to American young people, all that matters is power and what one can get away with. One wonders if the advisers to Heinrich Himmler and Adolf Eichmann tendered the same advice.

In his partial defence, this person may be gullible enough believe that his leaders are so noble and virtuous that they have no need for democratic oversight or legal constraint. Mr. Hanson may somehow have convinced himself that Americans overall (or only their elected President and his appointees and bureaucrats) are so free of sin and temptation that they – unique in history and alone among men and nations – can be trusted with absolute power. If so, he is no student of history, lacks an understanding of the subtlety and value in American rule of law, and is blind to the purpose behind its carefully-devised checks and balances which seem to be appreciated by even semi-educated people around the world. If he truly maintains this optimistic view of unfettered state power, then the best that one can say is that he treads the narrow line dividing naivety from the most bloodthirsty of tyrannies.

But I am too kind in assuming that Mr. Hanson would, out of naivety, relinquish all power to the state and rely solely upon the allegedly good intentions of its masters. Were that the case, then he would not advocate boundless state power chiefly as a license to torture, to assassinate and to condemn often-innocent people to concentration camps. Pointedly, he does not defend those activities on moral grounds: morality seems to be an alien concept in his universe.  I am not yet prepared to believe that Mr. Hanson supports unconstrained assassination, invasion and torture because they give him some perverted pleasure, and so the remaining likelihood is that he wants them because they are expedient. He seems to be an extreme version of Machiavelli, who believes that any ends are justified by all means whatsoever.

Lest I seem hasty or unfair, in another part of his very, very long online oeuvre, Mr. Hanson instructs us in the foundations of American order:

“…it seems okay to assassinate a terrorist kingpin either by air attack or commando raid. But legal and moral problems arise if he is captured, detained, waterboarded, or tried in a military tribunal. A quick death seems to end almost all legal discussions and controversies (and) targeted assassinations are better done under liberal presidents, who are more likely to be seen as humanitarians who only reluctantly order such killings.”

Here and elsewhere, the author expresses no values that I could find apart from expediency. He neither says that rule of law is essential but that Osama’s summary execution was a necessary exception (a point that I am prepared to consider), nor that opposing Islamist terrorism in its entirety is a unique case requiring America to mothball its principles and procedures at least temporarily. Admitting a limit to how much of this stuff an educated or even a merely thoughtful person can stand, Mr. Hanson appears to share the amoral or immoral expediency associated with Bill Clinton but without the sense to prevaricate. His only rule seems to be “don’t get caught.”

Having lived and worked for decades in Pakistan and Afghanistan, I share Mr. Hanson’s relief at the death of Osama bin Laden, even by the “rough justice” that is never better than the proper kind. I concur that radical Islamism is everywhere on the run, often because of the intrepid Arab youth who in the hope of liberal democracy have rejected Osama and all that he stands for. I agree with him that Osama’s recently-discovered location points to Pakistani lies and their continued protection of Al Qaeda and Taliban terrorists, and how this may give American leaders the clarity and resolve needed to end the Afghan war swiftly and honourably. I need neither to question his remedies for Libya nor anywhere else, nor to debate what valuable information may have been obtained in the Guantanamo gulag and whether it justifies the torture of so many innocents, because what matters most of all is his belief in unbridled power driven only by expediency. On that he is most clear.

Unable to peer into Mr. Hanson’s heart and mind, one may wonder whether he is a shallow person who can think no further than immediate results, blind to the risks and consequences of abandoning a complex, nuanced system that has long served Americans so well. Nor can one discern whether he is foolish, or evil, or the kind of fool who writes and teaches, encourages and enables evil on its grandest and most devastating scale. This we cannot know, but we can wonder what parents must be thinking when they spend almost $30,000 a year to send a child to Hillsdale College, when a rap-album about “slappin’ hos” and summarily “offing” one’s enemies would provide the same moral content that Mr. Hanson teaches, but at a lower cost.

Meanwhile, until that unlikely day when we are ruled by gods, unlimited power driven only by expedience puts us firmly on the road to serfdom and worse, a path leading almost inevitably under those old, iron gates labelled “Arbeit Macht Frei.” When we get there, someone as expedient as Mr. Hanson may be holding the door.