Can books make us human or are we born human?

I would like to re-word the thesis of this symposium, and present my list of books that are known to make people humane, and thus be a catalyst to make the reader an enlightened, knowledgeable, and truth-seeking missile of a human being.

People are homo sapiens, even if they lack a proper understanding of the human condition. Joseph Stalin and Mother Teresa were both human; the difference between them, however, was not the question of their biological classification, but their choices. Stalin demeaned and killed humans and Blessed Teresa cared for and defended them. For at “the Day of Judgment, we shall not be asked what we have read but what we have done; not how well we have spoken, but how holy we have lived,” wrote St. Thomas a Kempis in The Imitation of Christ.

I am thus providing ten books which I believe best encapsulate and understand what it means to be a humane human; that is, sympathetic to the whole person, have a foundation in God, and outwardly show an ability to love transcendentally (opposed to hiding their candle beneath a bushel).

Furthermore, I’ve resisted including books-I-like or books-everyone-should-read if they do not fit the prompt. Aquinas’ brilliant Summa Theologica is a perfect example of this; as are Evelyn Waugh’s The Loved One and Vile Bodies, and Graham Greene’s The Heart of the Matter (my three favorite books). They do address aspects of humanity, but not to the degree to which this symposium prompts me to choose.

I also did not comment on any of my book selections. This was intentional. For those who know me, I am quite chatty. For those who read me, I enjoy explaining and diving into ideas. For this symposium, however, I thought it much more apt to let the books and their authors speak for themselves. Too much commentary can set up unintentional expectations, and perhaps ruin the experience of diving into a new read. All of these books have profoundly affected my character, challenged my thinking, and have prompted me to act accordingly.

All books selected were written in the not-so-distant 20th century, and remind me of something Tom Bombadil said to the hobbits: “You’ve found yourselves again, out of the deep water. Clothes are but little loss, if you escape from drowning.”

“No,” said the little prince, “I’m looking for friends. What does tamed mean?”
“It’s something that been too often neglected. It means, ‘to create ties’… The only things you learn are the things you tame,” said the fox. “People don’t have time to learn anything. They buy things ready-made in stores. But since there are no stores where you can buy friends, people no longer have friends. If you want a friend, tame me!”

2. The Velveteen Rabbit by Margery Williams

“What is REAL?” asked the Rabbit one day, when they were lying side by side near the nursery fender, before Nana came to tidy the room. “Does it mean having things that buzz inside you and a stick-out handle?”

“Real isn’t how you are made,” said the Skin Horse. “It’s a thing that happens to you. When a child loves you for a long, long time, not just to play with, but REALLY loves you, then you become Real.”

“Does it hurt?” asked the Rabbit.

“Sometimes,” said the Skin Horse, for he was always truthful. “When you are Real you don’t mind being hurt.”

“Does it happen all at once, like being wound up,” he asked, “or bit by bit?”

“It doesn’t happen all at once,” said the Skin Horse. “You become. It takes a long time. That’s why it doesn’t happen often to people who break easily, or have sharp edges, or who have to be carefully kept. Generally, by the time you are Real, most of your hair has been loved off, and your eyes drop out and you get loose in the joints and very shabby. But these things don’t matter at all, because once you are Real you can’t be ugly, except to people who don’t understand.”

3. Calvin and Hobbes by Bill Watterson

“Scripture tells us that everything that exists does not exist by chance but is willed by God and part of his plan, at whose center is the invitation to partake, in Christ, in the divine life. Creation is born of the Logos and indelibly bears the mark of the creative Reason which orders and directs it… Reality, then, is born of the word, as creatura Verbi, and everything is called to serve the word. Creation is the setting in which the entire history of the love between God and his creation develops; hence human salvation is the reason underlying everything.”

“The word of God makes us change our concept of realism: the realist is one who recognizes in the word of God the foundation of all things.”

5. The Habit of Being by Flannery O’Connor; selected and edited by Sally Fitzgerald 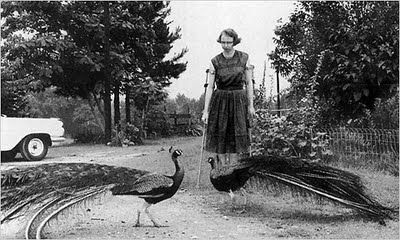 “I was once, five or six years ago, taken by some friends to have dinner with Mary McCarthy an

d her husband, Mr. Broadwater… She departed the Church at the age of 15 and is a Big Intellectual…. Toward morning the conversation turned on the Eucharist, which I, being the Catholic, was obviously supposed to defend. Mrs. Broadwater said when she was a child and received the host, she thought of it as the Holy Ghost, He being the most portable person of the Trinity; now she thought of it as a symbol and implied that it was a pretty good one. I then said, in a very shaky voice, Well, if it’s a symbol, to hell with it. That was all the defense I was capable of but I realize now that this is all I will ever be able to say about it, outside of a story, except that it is the center of existence for me; all the rest of life is expendable.”

“I don’t really think the standard of judgment, the missing link, you spoke of that you find in my stories emerges from any religion but Christianity, because it concerns specifically Christ and the Incarnation, the fact that there has been a unique intervention in history. It’s not a matter in these stories of Do Unto Others. That can be found in any ethical cultural series. It is the fact of the Word made flesh. As the Misfit said, “He thrown everything off balance and it’s nothing for you to do but follow him or find some meanness.” That is the fulcrum that lifts my particular stories. I’m a Catholic but this is in orthodox Protestantism also, though out of context–which makes it grow into grotesque forms. The Catholic, using his own eyes and the eyes of the Church (when he is inclined to open them) is in a most favorable position to recognize the grotesque…”

“Love is the revelation of our deepest personal meaning, value, and identity. But this revelation remains impossible as long as we are the prisoner of our own egoism.”
—Love and Need: Is Love a Package or a Message

“Thus, it is not difficult for the abstract and scientific doctrines of modern humanism to become means by which the individual person is reduced to subjection to man in the abstract. And as Gabriel Marcel has pointed out, this vast and awful abstractness hovers over the abyss of mass society to bring forth from it the antihumanist and irresponsible monstrosity that is mass-man. This explains, in part, why modern secular humanisms are so fair and optimistic in theory and so utterly merciless and inhumane in practice.”
—Christian Humanism

7. On the Unseriousness of Human Affairs by Fr. James V. Schall, SJ

“Thus, there is an excitement in simply knowing the truth, the knowledge of things. And this excitement flows naturally into our social nature. We want to explain to others how we arrive at or came to know the things seen. We become active; we want to talk, instruct, help others see what we see.”
—On Teaching and Being Eminently Teachable

“I consider utopians of every sort, therefore, to be intellectually poor, however sophisticated their systems. They are modern Pelagians who do not see any need of grace, who do not see any need of an independent truth by which they might correct their ideas about what the world should be like. And behind all these lofty theories is almost always a sinful, deviant heart bent on rejecting that conversion of soul from which all social reform ultimately derives.”
—On Intellectual Poverty

8. Death Comes for the Archbishop by Willa Cather

“Father Vaillant began pacing restlessly up and down as he spoke, and the Bishop watched him, musing. It was just this in his friend that was dear to him. ‘Where there is great love there are always miracles,’ he said at length. ‘One might almost say that an apparition is human vision corrected by divine love. I do not see you as you really are, Joseph; I see you through my affection for you. The Miracles of the Church seem to me not so much upon faces or voices or healing power coming suddenly near to us from afar off, but upon our perceptions being made finer, so that for a moment our eyes can see and our ears can hear what is there about us always.”

“The truth was, Jacinto liked the Bishop’s way of meeting people; thought he had the right tone with Padre Gallegos, the right tone with Padre Jesus, and that he had good manners with the Indians. In his experience, white people, when they addressed Indians, always put on a false face. There were many kinds of false faces; Father Vaillant’s, for example, was kindly but too vehement. The Bishop put on none at all. He stood straight and turned to the Governor of Laguna, and his face underwent no change. Jacinto thought this remarkable.”

9. Pages from an Oxford Diary by Paul Elmer More

“What saved me from moral and emotional paralysis in this pseudo-philosophy was, I think, a deep-seated interest in humanity. I could not reason myself into believing that men are only machines; I could not smother in logic the sense of mystery that broods upon the world, nor find any place in the network of blind chance and fate for the human will.”

“Curious, is it not, that purpose is the only basis of a reasonable life, yet purpose as an hypothesis of creation leads to an irrational premise. Must we conclude that “reasonable” and “rational” are not convertible terms? that rationalism is unreasonable?”

But yield who will to their separation,
My object in living is to unite
My avocation and my vocation
As my two eyes make one in sight.
Only where love and need are one,
And the work is play for mortal stakes,
Is the deed ever really done
For Heaven and the future’s sakes.
–from “Two Tramps in Mud Time”

I may have wept that any should have died
Or missed their chance, or not done their best,
Or been their riches, fame, or love denied;
On me as much as any jest.
I take my incompleteness with the rest.
–from “The Lesson For Today”