Plutarch’s Life Studies: for Everybody 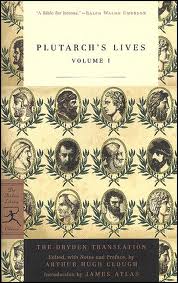 This past year my two oldest boys (high school age) read Plutarch’s biographical essays on Solon, Pericles, Alexander and Caesar. One of my sons loved it, the other was much more grumpy about the exercise, but I think some of it rubbed off. There was even an unexpected trickle-down effect. One day my 10-year-old daughter accused a younger sister of acting like Alexander the Great! He was known for his mercurial temperament.

Samuel Johnson tells us that biography is the best way to learn about the past. The reason is simple: “we are all prompted by the same motives, all deceived by the same fallacies, all animated by hope, obstructed by danger, entangled by desire, and seduced by pleasure.” Throughout his essays and biographies, Plutarch reflected on the common themes of humanity, drawing from them important lessons about virtue, heroism, vanity and vice, and frequently enlivened with fascinating anecdotes.

I’ll highlight just a few of Plutarch’s life studies, taken from Penguin’s selection The Makers of Rome. First is Fabius Maximus (c. 280-203 BC), the general who opposed Hannibal’s invasion through his famous delaying tactics which were meant to oppose the enemy by gradually wearing him down at a time when Roman armies could not defeat the Carthaginians in open combat. Fabius was immune to the superstitious portents and omens that alarmed his fellow countrymen.

He was much more impressed by the reports of the small size of Hannibal’s force and of how poorly it was supplied, and he urged the Romans to have patience and on no account engage a commander who led an army that had been hardened in many contests for this very purpose of forcing a decisive battle. Instead they should send help to their allies, keep their subject cities under control, and allow Hannibal’s strength… to waste away like a flame which flares up brightly but has little fuel to sustain it.

Plutarch is good at giving us well rounded portraits of men who are seldom all good or all bad. That said, Fabius’ contemporary Marcellus (c. 286-208) emerges as one of the most noble Romans, perhaps only to be rivaled by Brutus.

Fighting appealed to his temperament, and he was a daring soldier who bore himself with lordly assurance on the battlefield, but in other respects he was modest and humane. He had enough regard for Greek culture and literature to make him honour and admire those who excelled in them, but he himself never found the leisure to master or even study these subjects to the extent that he would have wished.

By pursuing a more aggressive war against Hannibal, Marcellus’ tactics balanced those of the cautious Fabius. Of particular interest is the Roman siege of Syracuse in which the defenders made use of ingenious war machines designed by the Greek mathematician Archimedes to hold off the attackers for many months. (I’m surprised that of all the ancient epics that have been brought to life on screen, no Hollywood producer has thought to recreate Archimedes’ fantastic weapons, including a claw with a crane-lie arm that could lift warships out of the water.) After the Roman victory, the Greek scientist was thoughtlessly killed by a Roman soldier, a fact which the gallant Marcellus particularly regretted.

Much more ambivalent is the career of Marc Antony (c. 83-30 BC), a member of the triumvirate that took power after Caesar’s assassination. He has come down to us as the embodiment of the playboy adventurer. Yet Plutarch paints a picture of him that is by no means unsympathetic. He was simple and generous. He could take criticism, including jokes at his expense. Antony was a capable commander, beloved by his troops, willing to share their dangers and hardships on campaign. Yet at the battle of Actium his infatuation with Cleopatra got the better of him, and for the first time he abandoned his men to their fate thus dooming his own pretensions as Caesar in the east. If any character comes across as truly despicable it is the scheming Cleopatra or the arrogant and ruthless Octavius (later Caesar Augustus) who permitted his own mentor, the great senator Cicero, to be killed as part of a political purge.

After reading a bit of Plutarch we can try applying his methods to our own reading. For example, although the Greek chronicler draws parallels between Caesar (the greatest Roman conqueror) and Alexander (the greatest Greek), one can see how in many respects Marc Antony shared traits in common with the impulsive temperament of the famous Macedonian leader. Or compare George Washington with Fabius. The American leader was a true “Fabian” in his drawn out struggle with the British whom he defeated less by tactical excellence (he lost a number of early engagements against superior enemy generals) than through determination, patience and political acumen.

So, which edition of Plutarch should you buy? An inexpensive complete two volume set is available from Modern Library. Although the translation dates back to the late 17th century Dryden edition, updated by Victorian English scholar Arthur Hugh Clough, it remains clear if a little archaic. The drawback is that there is almost no annotation or maps. The advantage is that the Lives are presented in their original order. The best modern translations, at a reasonable price, are the Penguin paperbacks. There are plenty of helpful notes on obscure references. But unlike the Dryden version, these are selections (of five or six lives) grouped by epoch and nationality. Part of the brilliance of Plutarch’s original scheme–whereby we can compare the careers of Greeks and their Roman counterparts–is thereby lost. Finally there are the high quality hardback Loeb dual language volumes (with the original Greek text). These are probably the best, but they cost about twice what you’ll pay for other editions.

Plutarch’s The Makers of Rome can be found in The Imaginative  Conservative Bookstore.

About the Author: Matthew Anger

Matthew Anger resides in Richmond, Virginia. He is a commentator on cultural and historical topics and editor of The Eyewitness: An Anthology of Short Stories & Historical Fiction by Hilaire Belloc.