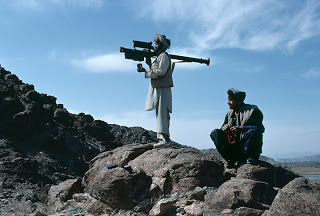 Some 25 years ago this week, a few nervous young men walked hesitantly into a barren, autumn field and lifted heavy contraptions onto their shoulders as they tried to remember their training. They knew that failure would bring near-certain death as well as lasting shame to their surviving families. Mouthing silent prayers, they fumbled with the controls and trembled from the force and the roar as their projectiles wiggled and wove into the sky, and two heavily-armoured Soviet Hind helicopters burst into flame and went crashing to earth.

Afghanistan’s freedom-fighters had launched the first Stinger surface-to-air missiles against the Russian invaders, signalling the end of what the American President who provided the weapons called the Evil Empire.

For six years the beleaguered Afghan resistance had been helpless against the Soviet air-war, and Russian helicopters had hovered over their villages and mountain redoubts for hours at a time, firing rockets and machine-guns with impunity. Eventually a million Afghan civilians and freedom-fighters would lose their lives, and a million more would lose arms and legs to the communists – a higher percentage of casualties than the USSR suffered in its much-vaunted “Great Patriotic War” against the Nazis.

With the introduction of Stinger missiles, the Soviets scrambled to change air tactics but not fast enough to escape the American high-tech weapons and the Afghans who wielded them. Every week, we journalists read intelligence briefings that reported examples of USSR military might shot down in twos and threes across the embattled country. The Wall Street Journal reports: “One Soviet squadron lost 13 of 40 planes in the year that followed, 10 to Stingers.”

With four million Afghan refugees camped around them in Peshawar, Pakistan, Western expatriates from around the world gathered in what was effectively the only bar in town, The American Club, comprised of “mercenaries, missionaries and misfits.”

French doctors, filthy from weeks behind enemy lines, bellied up to the bar beside taciturn Omaha agriculturalists, guarded Washington spooks, noisy British photo-journalists and journo-wannabes from everywhere in the Free World, alongside a United Nations of young volunteers washing down the internal dust from long days in refugee camps. Nurses and young diplomats rehearsed cabarets on the balcony, while inside the resident Irish band, “The Boys of County Khyber,” sang how far it was from Clare to here. At tables, wiry old men in civilian jobs made oblique references to their days in Vietnam, sure that everyone would draw the correct conclusions but certain that no one would blow their covers.

The American Club was where Kipling’s Great Game met Bogart’s Casablanca but Whitney Azoy, a lanky American anthropologist who had played the incredibly rough, horseback, Afghan game of buzkashi fifteen years before, nailed it by saying that Afghanistan had become “Spain for the Right.” Indeed, the zeal with which the Western world’s Leftists rallied against Franco was recapitulated in the anti-communist 1980s – and worldwide, from the 1917 Revolution to the fall of the Berlin Wall, citizens were killed by their own communist governments at a rate averaging 4,000 a day, the equivalent of one 9/11 disaster a day for 72 years. The fervour that would soon tear down the Berlin Wall focused then on the Afghan fight for freedom.

An elderly Philippino who had survived the Bataan Death March bought drinks for a young Russian journalist whose uncle knew Brezhnev and won him permission to emigrate westward. A superannuated Englishman who had been one of Monty’s couriers in North Africa shared a ham sandwich with a gallant young Polish reporter and anticommunist activist who is now back home as a prominent cabinet minister. The old Hungarian physician, who had fled his homeland in 1956, had “gone inside” to Afghanistan weeks before, where he saved the life of my friend, Mujahidin Commander Abdul Haq, when he stepped on a Russian anti-personnel mine.

The faux-grumpy USAID veteran who had worked all over Afghanistan in the 1970s on the first Afghan census, held forth to a cluster of fascinated youngsters who were Cold Warriors only by default: idealistic young nurses from Texas, recent university graduates from Marseilles or Dusseldorf or Oslo, and handsome young Italians recovering from rejection by the females in desperately short supply (it was said that every young lady who was a C-minus back home was a prom-queen in Peshawar).

The US Consul-General explained how he fobbed off bureaucratic accountants in Islamabad, defending the oceans of duty-free booze consumed by far too many club members than the embassy allowed: “It’s easy,” he drawled Bogart-style, “we spill a lot.” America went to considerable expense and effort to keep a broad, international face on the anti-Soviet coalition, but the valiant foreign doctors, nurses and volunteers were the real deal.

For months, Afghan mujahidin had been recruited and trained by the Pakistan Army. When the Stingers were deployed and news finally trickled out, I sat at a table packed with journalists more important than I, as they coordinated their wild guesses of how many Stingers had been delivered, ensuring that there was no discrepancy in their reports so their editors would assume that they were informed instead of just guessing. They guessed 600 but the numbers were eventually more than six times greater. Then Mr. Massood, the Pakistani Muslim barman who could mix any drink on earth without ever having tasted alcohol, served crème de menthe and brandy because nothing other than a Stinger Cocktail seemed appropriate.

I scribbled a cartoon afterwards of two Afghan warriors: one holding a Stinger and being told “Ali, when you fire it you’re supposed to shout ‘Allah-o-Acbar,’ not ‘This Bud’s for you!’”

According to The Wall Street Journal, the three mujahids who fired the first Stingers are now in their fifties: a bank manager, a district sub-governor and a member of the national parliament. It is representative, for the vast majority of the freedom-fighters resumed normal life as Cincinnatus returned to his plough. Only a few became warlords or marched among them, and some of the most principled old mujahidin commanders, the ones still alive, took exile in Paris or Montreal or Virginia to avoid assassination at the hands of the Taliban and their Pakistani  masters still waging war against Afghan democracy and its NATO allies.

The few hundred Stinger missiles that were unused and unrecovered are now safely inert, their batteries irreplaceable. Their Afghan operators find their work-a-day lives to have grown rather boring after such youthful adventures, as did my great-uncle who was an ambulance driver in the Great War before spending the rest of his life filling prescriptions in Detroit. Speaking for the vast majority of his countrymen who fear and disrespect the terrorists, one of the Afghan veterans “has little patience for today’s insurgents. ‘We had an enemy—the Russians,” he says. “These suicide bombers today attack Americans and Muslims. What’s the point?’”