Yesterday saw a puzzling outbreak of abnormality from senior Christian leaders that, so far, nobody has attributed to this week’s solar storm which was the biggest since 2005.

Anglican bishops in Britain’s House of Lords revolted over the Government’s proposal to cap family welfare benefits at 26,000 pounds sterling per annum ($40,600), which is the average national salary.

Work and Pensions Secretary Iain Duncan Smith insisted that the limit was not designed to punish claimants: “The purpose of this is to give fairness to people who are paying tax …(and) It is not fair to trap somebody in an expensive house which they cannot afford because they would lose their housing benefit if they went to work, so they have no incentive to work.” Nevertheless, socialist peers, defectors from the Liberal Democrat-Conservative coalition government and others voted to exempt children’s benefits from the legislation.

There is nothing odd in this. Across the Anglosphere, High Church clerics are always pink at the edges. A generation ago, writer Dinesh D’Souza telephoned American Catholic bishops who had signed a letter denouncing President Reagan’s defense budget as too high. He asked them how much America spent on defense and not one of them had a clue.

The anomaly is a declaration from a former Archbishop of Canterbury that his colleagues need to go soak their heads.

Lord George Carey, who led the Anglican faith from 1991 to 2002, pronounced that Britain’s spiraling debt, not welfare limits, “is the greatest moral scandal facing Britain today.” Not a political challenge, not an economic peril – a moral scandal. Take that, Ben Bernanke!

First, the clergyman explained, there should be justice for middle-class taxpayers squeezed by the recession. Justice for the bourgeoisie? Coming from a modern Anglican clergyman, this is as astonishing as professing faith in the Resurrection.

Noting that he was raised in public housing and had left school at age 15 to work for the Electricity Board, Carey lamented: “The truth is that the welfare system has (grown)…to an industry of gargantuan proportions which is fuelling those very vices and impoverishing us all. In the worst-case scenario it traps people into dependency and rewards fecklessness and irresponsibility.”

Not only did he dare to mention vice, indeed vice committed by poor people, but fuelled by the Welfare State and aided by posh, bien pensant goo-goos in the Upper House of Parliament. In modern England, discussion of vice is traditionally restricted to mosques.

Adding insult to injury, he praised Secretary Smith as “a committed Christian whose motivation is to dispel the modern myth which lies behind our benefits culture (and) gives the lie to the argument that good Christians who care for their fellow man should continue to support our bloated welfare state.” Unstated is who are the bad Christians: any volunteers from the noble, Lord Bishops?

Before anyone tut-tuts about the decadent, socialist, God-less Limeys, what American presidential candidates dare accuse the idle poor of vice? Never that daring, they address the same problems but in the Oprah Winfrey/Pop Psychology School of Victimology. Carey, however, is equally stern against those who engage in vice and those who spread it, and his dramatic statements seem to resonate increasingly across Middle England.

Meanwhile, if Anglicanism is the Christian equivalent of Burger King, even less expected utterances were made across the road at McDonalds.

On the Catholic Church’s World Day of Communication, Pope Benedict XVI told everyone to shut up.

As a communication advisor, this thought delights me beyond description and it must remove anyone’s lingering doubt that this man is truly the representative of God on earth. 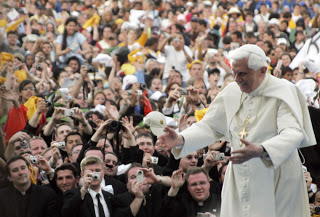 “Silence is a precious commodity,” the Pontiff declared, “that enables us to exercise proper discernment in the face of the surcharge of stimuli and data that we receive”. He continues:

“Silence is an integral element of communication; in its absence, words rich in content cannot exist. In silence, we are better able to listen to and understand ourselves; ideas come to birth and acquire depth…By remaining silent we allow the other person to speak, to express him or herself; and we avoid being tied simply to our own words and ideas without them being adequately tested. In this way, space is created for mutual listening, and deeper human relationships become possible…When messages and information are plentiful, silence becomes essential if we are to distinguish what is important from what is insignificant or secondary.”

He is reminiscent of Duke Ellington, who observed that “music is what happens between the notes”, else all is lost amid uninterrupted sound. He also recalls Saint Augustine nominating selfishness as Original Sin, for only learning to clam up permits listening to others.

Pope Benedict appeared to criticize Internet-abuse where “people today are frequently bombarded with answers to questions they have never asked and to needs of which they were unaware.” He echoes T. S. Eliot’s point from “The Rock” – “Where is the wisdom we have lost in knowledge? Where is the knowledge we have lost in information?”

Yet he praises social-networking sites, where “In concise phrases, often no longer than a verse from the Bible, profound thoughts can be communicated, as long as those taking part in the conversation do not neglect to cultivate their own inner lives.” Not exactly out of touch at age 84, and no wonder he attracts mammoth crowds of youths.

One need not be surprised by wisdom from any pope, much less this one, but there is something equally unexpected and wonderful when he chooses the World Day of Communication to tell people to pipe down and think for a change.

If all this isn’t due to sun spots, the Holy Ghost may be eating two breakfasts each morning.

Books on the people and topics discussed in this article can be found at The Imaginative Conservative Bookstore.