Minutes of the Meeting

The Chairman smiled even though the meeting had run too long already. He asked gently, “Is that all for today, Rocky?” He used a favourite nickname for the elderly manager who had long been as dependable as a rock.

“One more thing, Lord,” mumbled Saint Peter, shuffling through his notes. God stroked His beard patiently. It can be lonely at the top.

Being omniscient and knowing everything already, God had little obvious reason for the morning briefings that He had suffered through every day for millennia now, but letting the saint brief Him helped to focus Peter’s mind. The holy man had always been somewhat forgetful; even as a fisherman he had often found himself afloat in the Sea of Galilee while having forgotten to bring the nets. Reminding him in this gentle but painstaking way often bored God, but it helped His deputy keep to the work plan.

“We spoke about the Mediterranean plankton, I think,” mumbled the saint, “and Missus Cartwright who’s trying to get her husband to church in Cleveland.”

“That is how we opened the meeting,” sighed God.

There were drawbacks to the Hereafter operating outside of Time, thought the Creator, for it made meetings seem endless. However, had He made Heaven operate inside of Time and its helpful constraints, then everyone else would have had to stop for meals and catering was one more problem that the organisation did not need.

“Patagonian weather patterns, alpine wildflowers, choosing a selective virus to infect politicians,” Peter muttered, checking his list. The Creator smiled weakly, nodding at items already discussed. Being a Loving God, He ignored any inclination to retire Peter to the golf course and call in temporary labour from the Cherubim secretarial pool.

“Ah! The Anglican Church,” Peter declared. “That’s what I forgot.”

“Go ahead,” urged the Almighty, trying to look interested.

It was relatively insignificant, thought God, especially compared to 280,000 different species of beetles and their billions of members’ various personal problems, but at least it would end the meeting. Soon, perhaps, the Supreme Being could slip out of His office to watch Monteverdi rehearse a new Christmas Mass, a surprise composed for His Son’s next birthday.

“The Anglicans are going to create a presidential position because the Archbishop of Canterbury complains that heading their church is too much work for one man to do,” the saint explained. 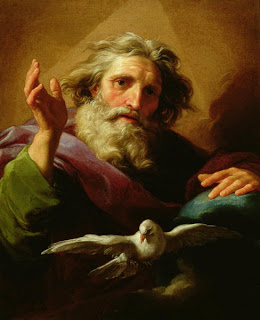 “Remind me how many Anglicans there are?” asked God, rather rhetorically because He knows everything already.

God frowned. “Did you check with the Prayer Auditors? Do the green-eyeshade boys report any similar grumbling from Benedict?”

“Of course,” replied the saint, ”the Holy Father is 85 years old, his client base is more than a billion souls, and we don’t hear any gripes. He just gets on with the work. But remember, Lord, you did the interviews and the hiring for that position.”

“If you want something done right,” God thought silently, “then do it yourself.”

“If it’s what the archbishop calls ‘a presidential figure,’ then he may mean an elected one,” worried the first pontiff.

“If the job is elected, and not appointed by the Lambeth Conference,” God suggested, “then maybe they won’t be stuck with a president who is a practicing lesbian bishop. They might get someone a little more traditional, even by accident.”

The Creator often prefers to think on the sunny side, Saint Peter reflected.

“But Lord, if the job is elected then they’ll probably get some ghastly politician like Tony Blair,” Peter suggested. The saint knew how much the Supreme Being regretted having created the militaristic, oleaginous, pro-abortion and rather dubious Catholic convert.

The God of Abraham scowled, with the sort of expression that among one of his creatures might have signified haemorrhoids, Job’s boils or a really vicious Old Testament smiting. But then He smiled again.

“Our selective virus can kill off anyone whom they elect, or every politician for that matter,” mused the Creator. “Get the Bio Lab working faster, and tell the fallen angels downstairs to stock up on sulphur,” he added.

Saint Peter thanked the Lord and returned to his own office, while the chairman of the Holy Trinity locked His desk and headed out the back door to the concert rehearsal.