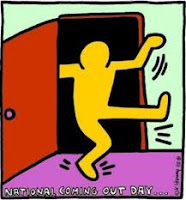 October 11th was “National Coming Out Day.”  Every year, this observance reminds me of the time when I first came out, when I was a graduate student. Though I was raised in a religious environment in which orientation was not made a central issue, it had become a very central issue for me during my college years. By that time, I was heavily involved in a religious subculture which evinced very definite and sometimes very dogmatically held convictions on the matter. It was very clear, in my social circles, what the norm was, and that this norm was the only acceptable one for a follower of Jesus Christ.

Even during those years, however, I was often aware of being ill-at-ease with the norm. Inclinations and urges stirred within me that I knew were not acceptable to my peers. When I was a Junior, a guest speaker came to the campus of my church-related college, deliberately chosen by organizers of a lecture series to promote some “diversity” of viewpoint. The speaker was a Christian, and defended the idea that the orientation to which I was tempted was not inconsistent with his Christian commitment. He even suggested that it was closer to the spirit of Christian love than what I was accustomed to. I was taken aback by how nasty some of my friends were in response to him. They were reduced to spewing hateful-sounding stereotypes, and snidely suggesting that the speaker must hold the views he does only because they “legitimated his lifestyle.” I thought that the speaker was articulate, and I felt that I could appreciate how compelling his case was even though I was by no means sure that I agreed with him.

It wasn’t until I got to graduate school that I began to meet more people who openly embraced the orientation that I had assumed was evil. I met other students, and even professors, who exploded my stereotypical expectations, and who affirmed the inclinations and impulses that I had been feeling (and often trying to suppress) for several years.

It was at that point, very tentatively at first, that I began to come out to some of my friends. What a sense of relief I felt when I began openly to own aspects of myself that I had been trying to deny! Yes, I lost some friends at the time, but I was surprised how many of them were open and accepting, how many were affirming of my self-discovery even when they did not share my orientation. As I neared the end of my time in graduate school, I applied for a job in a location that was known for being especially friendly to people of my orientation, and nearly all of my friends encouraged me to go and enjoy this wondrous place where I could safely be “out.”

That was how I first came out as a conservative, and came to work in an academic environment that is often associated with conservatism.

That was hardly the end the matter, however. My struggle regarding orientation has turned out to be life-long. Over the almost quarter century since that first coming out, I’ve struggled with how often I seem to fall short of the expectations popularly associated with being a conservative. I don’t really live any specifically conservative “lifestyle,” as some of my progressive-minded friends sometimes seem to suspect. (I think they might be more comfortable sometimes if I were more “flaming.”) I continue in my commitment to that religious tradition (Anabaptist) whose contemporary adherents often (but by no means always) are very suspicious of conservative perspectives, precisely on the basis of our emphasis upon Jesus’ rejection of violence, his preferential concern for the marginalized. On some supposedly “key” issues (sexuality, for example) that are often thought of as primary reference points for voting when one is a conservative, my views are very mixed and confusing (both to others and to myself). I tend to value perspectives which strongly emphasize relativity, which is emphatically not to say relativism (the latter generally naming an absolutist view). Though I am partly inspired by “pragmatist” and “deconstructionist” modes of thought, such inspiration has often led me back into the orbit of more putatively conservative thinkers, including Russell Kirk, Alasdair MacIntyre, Michael Oakeshott, and Michael Polanyi.

But most importantly, with regard to my theme here, I have progressed (if I may use that dreaded term) to what I would think of as a much more highly nuanced view regarding my orientation. You have probably heard about those who argue that orientation is not simply a binary matter, but more like a continuum. Intellectually, I have probably been guilty of a fair amount of “bi-curiosity,” in spite of my conservative associations. I still consider myself mostly conservative in orientation, but I’ve come to doubt (perhaps I’ve read too much Foucault?) that there really is such a thing (singular) as “conservatism,” as opposed to the latter being a “social construction” that pretends to gather together what are actually quite disparate threads—threads that sometimes easily intertwine and sometimes do not. At the very least, I think that the sense in which I am a conservative is rather complicated. I have a fair amount of trouble identifying myself with one of the supposed specific “stripes” of conservatism.

Now, is it possible that this means I might count as an “imaginative conservative”? If so, is it time perhaps for another “coming out?” My friend Brad Birzer has invited me to consider this possibility, and I have accepted his invitation to make that consideration public. But I do so with fear and trembling.

I’m afraid that I will disappoint you, maybe even anger you, when you expect me to “be a conservative” (e. g., vote in the way that you think I should).

I’m also afraid that I might offend with the trope that I am wielding here. I might offend my “glbt” friends (whom I care for a lot), since my tone here may be taken by them as trivializing the ways in which they continue to suffer, and still must even fear for their safety and even their lives more often than many of us know. (On the other hand, conservatives should remember the aftermath of the French Revolution, right?)

And I will no doubt offend some of my friends (conservative or otherwise) with low tolerance for any ambiguity regarding “orientation,” whether sociopolitical or sexual.

But there it is. I think that I am (still) primarily a conservative. I hope that I can be known as an “imaginative” one.

About the Author: Peter Blum

Peter C. Blum teaches sociology and philosophy at Hillsdale College. His interests include philosophy, sociology, religion, and poetry. Dr. Blum is the author of For a Church to Come: Experiments in Postmodern Theory and Anabaptist Thought.