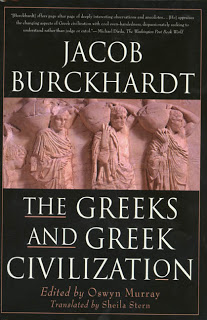 The Greeks and Greek Civilization, by Jacob Burckhardt

Jacob Burckhardt (1818-1897), a professor of history at the University of Basel, Switzerland, was one of the great scholars and thinkers of the last century. He is remembered principally for two works which have achieved renown: The Civilization of the Renaissance in Italy, which Lord Acton called “the most penetrating and subtle treatise on the history of civilization that exists in literature”; and Reflections on History, an extremely perceptive and timeless work that has been compared to the writings of Burke and Tocqueville.

Burckhardt looked with pessimism on the political, social, and historical tendencies of his time, predicting somberly, and correctly as it turned out, the ascendancy of men whom he characterized as the “terrible simplifiers,” by which he meant men who by their clever manipulations and vulgar appeals to mob psychology would achieve popular acclaim and, with the approbation of the people themselves, seek to extinguish freedom.

The present volume was originally a lecture series the author delivered to his students in the 1870s. Shortly after his death, these lectures were assembled and published in German under the title Griechische Kulturgeschichte (“Cultural History of the Greeks”). Though the work has never been fully translated to English, this new book rectifies that deficiency in part by publishing major selections from the German text.

It is a curious fact that when published in 1899, Burckhardt’s lectures were severely criticized by scholars, for at that time a romanticized view of the ancient Greeks, and especially of Athenian democracy, prevailed. The author was labeled “a clever dilettante” and the work one that “is incapable of saying anything. . . which deserves a hearing.” What nettled the critics was that Burckhardt, while he showed the highest reverence for Greek cultural attainments, discussed Greek political and social institutions with cold realism. He adjudged in grave terms the dominance of Greek life, at certain times and places, by a coarsely commercial and materialistic spirit, and, magnifying that spirit, the spread of a highly capricious democratic polity. Each of these factors—the commercial and the political—fed on one another, making society unstable and life difficult for all but the wealthiest or the most crafty.

Diabolical people have always existed, and our own standards of security cannot be applied to the violence of public affairs in Athens. The most repellent feature of Athens in the time of the orators is the way the popular assembly and the courts, with all their official apparatus, were the setting for the worst chicanery and persecutions, and provided the means for them. When we contemplate all the corrupt orators, the mass of decisions never put into practice, the claques and noisemakers to drown protests, the sycophants and false witnesses, the entanglement of the innocent in criminal proceedings, the silencing by murder of those who had right on their side, what amazes us is the immense arrogance of this unashamed parading of evil.

A few pages later he adds,

At the time when the sole general interest was the pursuit of enjoyment, the State too made pleasure its business…. Not only was there to be an end of wars. . . but life was to be nothing but pleasure, with festivals and associated distributions of money the main thing in Athenian life. The festival coffers became the most important in the state, and surpluses from all other funds were to go into them.

A corrupt establishment controlled the democratic assembly and the courts, observes Burckhardt, “through the public orators (rhetores) who were generally known for their vices… They were notorious for handing out civic rights and other honors, even to the enemies of Athens and to criminals, and for acting only when it was to their own advantage…. [Their] rise kept pace with the decline of the State… Athens still clung to these men though they had deceived her a thousand times….”

Let us be clear that this work also reflects Burckhardt’s affection for this ancient people because of their astounding achievements. Greece’s artists and architects created ideals of beauty that, after 2,500 years, remain models toward which cultivated men still strive. Her philosophers, historians, and writers too demand admiration, since, as the author says, “all subsequent objective perception of the world is only elaboration on the framework the Greeks began. We see with the eyes of the Greeks and use their phrases when we speak.” This extraordinary people, he comments, “seem the representatives of genius on earth….” Like us, they indeed made fateful errors, and it is for that reason Burckhardt insists that we must “study the Greeks; if we ignore them we are simply accepting our own decline.”

A modest man who lived very simply in a tiny apartment over a baker’s shop, Burckhardt was a giant of a scholar in an age of giants. His lifetime of study gave him a powerful sense of the nature of political delusions (e.g., democracy, egalitarianism, the primacy of money, etc.) and—since neither these delusions nor their consequences are new—a remarkable foreknowledge of the shape a future based on them would take.

Books mentioned in this essay may be found in The Imaginative Conservative Bookstore. This review was originally published in the New American in 1999. The Imaginative Conservative applies the principle of appreciation to the discussion of culture and politics—we approach dialogue with magnanimity rather than with mere civility. Will you help us remain a refreshing oasis in the increasingly contentious arena of modern discourse? Please consider donating now.

About the Author: James Thornton