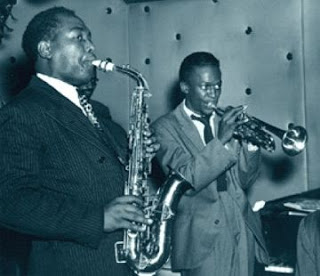 Conservative great, the late Ralph de Toledano, is far better known worldwide as an influential and early jazz critic. He used to tell me how he and Thomas Merton haunted New York jazz joints in the late 1930s when both were students of Jacques Barzun at Columbia. ‘Ralphie’ went on to cover the Alger Hiss trial for Newsweek and became best friends with Whittaker Chambers, while ‘Tommy’ joined the Trappists and I gather that the college kids who lurked up to Harlem found his ultimate vocation as admirable as perplexing.

Elsewhere, the attitudes toward jazz among great American Conservatives may require some guesswork (unless our readers know better, for I wouldn’t be completely surprised to learn that ‘Night Train John’ Willson backed up Coltrane on wailing blues-harp at a 1950s St. Louis University concert). Lionel Hampton, the eminent jazz vibraphonist and big-band leader, told me he was a lifelong conservative Republican when I met him at Mr. Reagan’s first inaugural ball, but he was a man of notes not letters.

I don’t recall Dr. Kirk ever mentioning jazz, focusing more on Burkes named Edmund than Raymond (clarinetist, 1904-1986, played with Preservation Hall and Kid Valentine). The iconic M. Stanton Evans is still a Paleo-Rock-‘n-Roller with an encyclopedic knowledge of everything from who was Little Richard’s drummer to where Elvis bought his blue suede shoes, but jazz? I can’t see William F. Buckley snapping his fingers and calling any hep-cat ‘daddy-o.’ Or a young Wilhelm Roepke frequenting the Weimar cabarets and sharing his last untipped Gauloise with Stéphane Grappelli. How anyone with the ultra-cool name of Hans Urs von Balthasar isn’t a German electric bass-player remains a mystery (you know: skinny shades indoors, black turtle-neck, about eight silver rings, heading an ultra-progressive jazz ensemble named Balthasar-Berliner Technikwerk).

Worse yet for bebop, methinks. In my own youthful days as a singer-songwriter, I wrote the only ragtime song on the Reformation (printed elsewhere on this website), which may count vaguely as jazz but not bebop. And I once referenced bebop in a down-market Capitol Hill bar where many a young Reaganaut and his dishy ‘New Right Baby’ (another song title) used to get merrily snockered.

Monday nights, the dive filled with lugubrious survivors of what they call The Great Folk-Music Scare: old hippies who shelved books in the Library of Congress and wheezed out the usual 1960s standards. I borrowed a guitar while they were on break and began strumming under the traditional, spoken, left-wing, folk-sermon introduction: ‘Waaal, maybe if people start a-thinkin’ again, we’ll start a-singin’ again. An’ if’n we start a-singin’ again, waal, maybe we’ll start carin’ again. An’ then, goldurn it, (voice rising) if’n we start carin’ again, WAAL, MAYBE WE’LL START MARCHIN’ AGAIN!’ They began rocking and twitching and grinning. They commenced hyperventilating and salivating, and possibly hallucinating. I had ‘em right where I wanted ‘em when I began to sing. It was a Dylan parody, the first four lines written by a friend of friends, Terry Southern (of The Magic Christian, etc), with the rest by me.

‘How many knees could a Negro grow

If a Negro could grow knees?

And how many Heebs could a Hebrew brew

If a Hebrew could brew Heebs?

And how many bees could a bebop bop

If a bebop could bop bees?

The answer, my friend,

Is blow it out yer…’

So it continued beyond ‘How much wood could a woodchuck chuck,’ onto a rhyme quite unsuitable for family websites. I think I might have had a few cocktails beforehand.

If you want a reasonable approximation of my reception, walk into a VFW hall just before the bar closes and desecrate Old Glory. There were gray-haired, pony-tailed hippies all weeping into their scraggy beards; bra-less old chicks in granny-dresses flapping; beatniks trying to beat me; pacifists trying to kill me; antiwar activists fumbling with dimes at the payphone calling in the 82nd Airborne, and so forth. It was an amusing evening, all told, and after a fashion it was conservative (or at least right-wing) but not precisely bebop or even jazz.

For bebop we may turn to Dave Frishberg (born in 1933, St. Paul, Minnesota), a talented jazz pianist, composer, singer and song-writer. His philosophy and politics are a mystery to me and at a guess I’d place this song sometime in the late 1970s. You don’t even have to be a conservative to like it, but it has something to do with a loss of community. (For youngsters, the line ‘walk on, walk on’ refers to ‘You’ll Never Walk Alone,’ a sentimental/inspirational/gooey song from the 1945 Rodgers and Hammerstein musical, Carousel).

“We must have lunch real soon. Your luggage is checked through. We’ve got inflation licked. I’ll get right back to you. It’s just a standard form. Tomorrow without fail. Pleased to meet you. Thanks a lot. Your check is in the mail.

”You may have won a prize. Won’t wrinkle, shrink or peel. Your secret’s safe with me. This is a real good deal. It’s finger lickin’ good. Strictly by the book. What’s fair is fair. I’ll be right there. I am not a crook.

“Walk on, walk on, with hope in your heart.

And you’re in for a big surprise.

A blizzard of lies.”