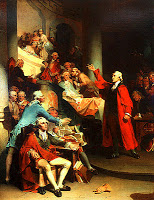 We Americans will soon find ourselves in the maelstrom of another presidential election. Like most Americans, I am interested in what the candidates have to say about the economy and foreign policy, healthcare and immigration, pro-life matters and religious liberties. As a professor of Rhetoric, however, I am perhaps more interested than most of my fellow Americans in not only what candidates say, but how they say it. For Rhetoricians, the contemporary election year is a sad and frustrating phenomenon.

It is all too easy to romanticize the past: the politicians of yesteryear were as noble or as slimy as the politicians we have today. There is, however, a major difference between how past politicians spoke to our ancestors and how current politicians speak to us today. Before televised speeches—let alone the 24-hour news cycle, a development that may spell the doom of the American republic—politicians spoke face-to-face with voters in public speeches and debates.
Presidential candidates still do this, of course, but mainly as a supplement to recorded statements, recorded statements that are usually little more than sound bites or bullet points, giving stock answers to predictable questions. Instead of thoughtful, researched, drawn out arguments the American public gets reductive slogans worthy of an Orwellian regime (“Hopeful compassionate change we can believe in from mavericks who are straight shooters!”).

Politicians, however, are simply giving us what we want, or what we can handle: upon close inspection, the most significant change in our political discourse over the past hundred years or so has been the ability of the audience to listen critically. Consider the audience of an orator like Lincoln: even if his audience consisted of simple farmers, these farmers would have been exposed regularly to examples of oratory modeled on great orations of the past. County fairs often featured Ciceronian orations extolling the virtues of American agriculture; even country preachers modeled themselves on the sermons of great Protestant divines; eloquent, structured toasts and speeches were expected features of public events. American culture at the time of Lincoln, in other words, was one in which the average citizen encountered regularly acts of rhetoric that demonstrated sustained logic in elegant, gripping language, held up to the standards of great Western orators.

The Rhetorical model of Liberal Education—the curriculum followed by the ancient Greeks and Romans, the early Church Fathers, the Byzantines, the Christian Humanists of the Renaissance, and many of the Founding Fathers of America—aimed at training young people to be public figures: people of strong character who could think clearly and speak persuasively in the public sphere. It was an education for leaders, preachers, and statesmen. Traditionally, this kind of rhetorical education was only needed by the ruling class: Chesterton’s free and happy peasants had little need of Ciceronian eloquence. In America, however, if we relegate this kind of Liberal Education to a select few, we are in great danger: every American voter (at least in theory) plays a role in guiding our regime. Liberal Education is a more urgent matter for the average person today than perhaps at any other time in history: he needs the tools to be a critical recipient of the messages constantly bombarding him from the media, able to sort through the mess in a thoughtful manner and deliver an intelligent, persuasive response. Contrast those simple American farmers with the average American voter today: he lives in a culture with no public standards for elevated oral discourse. Public entertainments have no oratorical component. If he goes to church, he probably hears homilies that are either self-help motivational talks or cutesy stories littered with bad jokes (one would be surprised to learn that we have literally hundreds of homiletic manuals and thousands of masterful sermons in the Western tradition!). A toast at a wedding reception or formal party—even a funeral elegy!—is today little more than funny anecdotes poorly strung together. No wonder our politicians talk to us in mentally reductive sound bites.

At Wyoming Catholic College, we teach our students the Rhetorical tradition to make them into strong, confident public thinkers and speakers. Only these kinds of citizens have the ability to reshape our political landscape, demanding more substance from our politicians of whatever stripe, and returning a measure of thoughtful debate and eloquent language to our currently impoverished political discourse.

Books on the topic discussed in this essay may be found in The Imaginative Conservative Bookstore.

This essay originally appeared on Cowboys, Philosophers and Poets and is published here by permission of the author.

About the Author: Sean Lewis