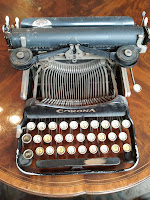 G.K. Chesterton was once described as a “Conservative” thinker. He responded as follows:

Because I want almost anything that doesn’t yet exist; because I want to turn a silent people into a singing people; because I would rejoice if a wineless country could be a wine-growing country; because I would change a world of wage-slaves into a world of freeholders; because I would have healthy employment instead of hideous unemployment; because I wish folk, now ruled by other people’s fads, to be ruled by their own laws and liberties; because I hate the established dirt and hate more the established cleanliness; because, in short, I want to alter nearly everything there is, a cursed, haughty, high-souled, well-informed, world-worrying, sky-scraping, hair-spliting, head-splitting, academic animal of a common quill-driving social reformer gets up and calls me a Conservative! Excuse me!

The word “conservative” should, in fact, never be used without a public health warning—or at least without careful definition. Its opposite, “liberal”, is no better.

I don’t wish to “conserve” the Catholic or the Christian tradition merely because it is the tradition I happen to be born into (in fact I wasn’t), but because I believe it is true to reality. Furthermore, I do not wish to conserve it in aspic or on ice. It is a living tradition, and that means it is growing and developing just as any organism would do. The continued vitality of this tradition depends on us. If a label is needed, “conservative” is better than most, but it has to be qualified: perhaps “imaginative conservative” comes closest to what Chesterton was and what I aspire to be; conserving what is good and changing everything else.

The picture shows Chesterton’s typewriter (on which, for all I know, the words I quoted were originally written). It is one of the items belonging to the great man that we conserve here at the Centre for Faith & Culture in Oxford, and which sometime next year will be transferred to the new library building at the Oxford Oratory, to be looked after in perpetuity. If you are interested in supporting this great work, the most helpful thing you can do is donate to the Oratory Appeal.

Books related to the topic of this article may be found in The Imaginative Conservative Bookstore. Published here by the gracious permission of the author, this post originally appeared in The Economy Project.