Dark Knight Rises: The World on a Bad Day

The massacre at a cinema in Colorado where audiences were enjoying The Dark Knight Rises—the culmination of Christopher Nolan’s Batman movie trilogy—seems to have provoked only a feeble discussion of gun control that is going nowhere, and very little on the showing of extreme violence in movies. The contrast with an earlier superhero film I have praised here—Marvel’s Avengers—is very marked. I don’t believe that the fact this massacre happened during the Dark Knight Rises rather than the latter is merely coincidental. Both deal with the battle of good and evil, but in very different ways. In fact two different kinds of imagination are involved. In order to understand this we need to look at the relation of art to entertainment to pornography.

Art can deal with any kind of subject matter, but the way it does so matters. Great art deals with its subjects in a great manner. Commercial entertainment is both (usually) crasser in its methods and more limited in what it encompasses—essentially, subjects with mass appeal, in order to maximize profit, but with certain limits, pornography being one. But the boundary between them is hard to define, or rather hard to agree upon. The most successful entertainment is often a work of art, and of course both art and entertainment may contain elements or notes of pornography (art may even deal explicitly with pornography as a topic).

Guernica by Picasso is great art dealing with the topic of state-sponsored violence. We are meant not to like it, but be disturbed by it. The Hunger Games trilogy covers the same topic in the mode of “entertainment”. But a pornographic photograph or movie depicts violence in a way designed to titillate the human organism into wanting more. In fact some neurophysiologists regard pornography as addictive, due to a release of chemicals in the brain. But there is more to this than physiology.

The human imagination mediates between the senses and the intellect, or the world and the spirit. It can therefore face in two very different directions—call them up and down. Facing “up” it is open to the light of the spirit, and reveals a world of forms shining through the images it constructs. An extreme example would be an icon or work of sacred art, which acts as a window towards the heavenly world that is more real, and more eternal, than the everyday. But any great work of art, I would argue, does this in a way. For example A Child Consecrated to Suffering by Paul Klee, which bears relatively little relation to naturalistic forms, may help to reveal a spiritual essence more effectively than a photograph or naturalistic painting, or a work by a lesser artist. 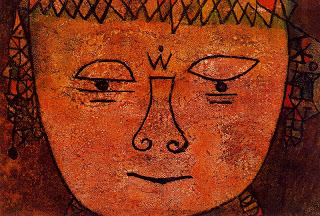 But what if the imagination faces “downwards”? In certain types of surreal art (though not all) and also in pornography, whether of violence or sex, images drawn from nature are blown out of proportion and arranged in such a way as to turn the soul away from the world of the spirit and introduce it to something baser, more corrupted, and more dangerous—also something less real than the world around us. The effects on us as consumers is rapidly apparent.

The Dark Knight series is not pornography, but its imagination is looking in several directions. It looks down into the pit of evil, it glances up to archetypes of heroism, and a lot of the time it looks around at a caricature of the world in between, in order to assure us that this is what it is really about: the world of the everyday, or rather the world on a bad day. Avengers has a different balance to it. The sense of violence and evil is less overpowering, because it is not intent on gazing into the abyss; it is less oppressive, because the movie is not trying to convince the cynics among us that it is about real life. (Compare Tom Hiddleston’s Loki with Heath Ledger’s acclaimed Joker, both great performances.) Avengers tries to look more in the direction of the archetypes, which inspire heroes. It does so lightly, with a generous seasoning of humour. And in so doing it lifts the spirit rather than casting it down.

Books related to the topic of this article may be found in The Imaginative Conservative Bookstore. Published here by the gracious permission of the author, this post originally appeared in Beauty in Education.