The Surrealist & the U.S. Constitution 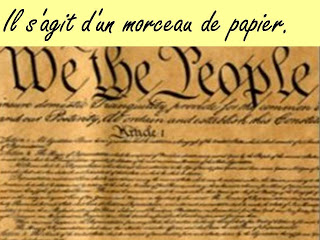 English families sometimes play ‘the Belgium Game’ as they motor through that country toward holidays in France or Switzerland; it gives them almost three hours to recall the name of a single famous Belgian. Not all contestants succeed.

The surrealist painter Rene Magritte (1898-1967) is one acceptable answer, and I recently visited his museum in central Brussels where his proud-if-desperate countrymen attempt to make a meal from a morsel. The massive and ludicrously spacious, five-storey, stone monument contains only about 200 of his paintings and drawings, but virtually none of the famous ones such as the castle on a massive, floating boulder, the man with the apple over his face, and so on, which reside in more famous museums abroad.

Presenting such a limited sample of his famous works took some doing, for when Magritte had even a small idea he beat it half to death again and again. He must have daubed more of his trite doves than Brussels has live pigeons, and if the petit-bourgeois son of a tailor and a milliner ever learned how to apply paint it was arguably only in his last decade, and only then did he reach the level of an average commercial magazine illustrator.

Magritte’s oeuvre certainly does not deserve its costly and cavernous mausoleum to Belgian vanity, but if the artist warrants any recognition at all it is only for deploying one nifty party-trick and concocting one insight.

The party trick is his surrealism, which like all surrealism merely knocks together unrelated images. You can do this at home by rooting through the pantry and the attic, and then mounting, say, a tunafish can on a hobbyhorse.

Indeed, Magritte did it while his friends took humiliating home-movies of the “great artist” prancing about with masks, joking about with various art props, and for all the world appearing to mock the audiences who praised and enriched him. The damning clips are screened continuously at the sepulchre, presumably to remind the paying visitors what suckers we are.

Unlike Magritte, the profoundly disgusting Dali knew how to paint, but he used the same tired tricks and you can too. Since random juxtapositions have no real meaning, surrealists can boost their reputations and earnings by being elliptical. This means that you should remain shtum and chew on a pipe artistically, while your well-rehearsed chums attempt to analyse your genius.

Your “startling and deeply innovative” tuna-can-headed hobbyhorse, then, becomes a cri-de-coeur against the triumph of productive necessity over childhood innocence, or alternatively, a bitter display of how society’s fish-headed, materialist elites control the epicene muscle and energy of the downtrodden proletariat, or perhaps a trenchant observation on the fundamental meaningless of life. Like all art that lacks content, it serves as a cheap vehicle for any bargain-basement ideology.

Surrealism, then, is a momentary curiosity but swiftly reveals itself as shallow, containing less mirth or information than, say, a game of charades played with friends at a weekend house party. But, however tired surrealism is, you may still revive it to your lasting celebrity; especially if you are also sexually attractive, indiscriminate and readily available, or if you have been bequeathed enough money to supply drugs to crowds of arty poseurs whom you hardly know. Warhol was inspired partly by Magritte.

From Magritte, what was original was not good and what was good was not original. His only real idea was borrowed, consciously or not, from about one thousand years of thinking by the Buddhist schools of Chinese Chan and Japanese Zen.

He displays it most clearly in his pictures of a tobacco pipe, bearing written legends declaring that this is not a pipe. While the booboisie puzzle over what he may mean, quite simply it is not a bloody pipe – it is a piece of paper with some ink or paint daubed over it. That is it.

Zen koans are riddles used for teaching, often to stop students from over-intellectualising matter or phenomena and so imposing their preconceptions on an uncooperative reality. The answers, like the picture that isn’t a pipe, are difficult only because they are so simple. The answer to more than one famous Zen conundrum is simply “drink tea” – meaning to ignore the question which only leads to over-intellectualised confusion, and just get on with a practical life in which spiritual insight is paradoxically easier to realise. Saint Benedict understood this well when he reformed monastic living.

Take simple things or actions, the Zen theory goes, and bury them under layer and layer of your personal preferences, tastes, ideologies and suspected motivations behind whatever you observe, and clarity becomes impossible. Persist in ranking everything in order of preference and you impose your tastes on unrelated or ill-related items. Run little hypothetical “movies” or daydream dialogues in your head and even your closest relationships become jeopardised by self, selfishness and make-believe. So shut up, focus on doing the laundry for a time, and make still what Buddhists call the monkey-mind.

In public life, this chattering process could reduce everything to politics, then to party politics and ultimately to personal vituperation. So if Zen or Benedictine abbeys accomplish anything useful, Fox News works hard to undo it.

Magritte’s only lesson, that a picture is only a picture and not the thing that depicts, is a small part of a bigger process but still a useful one if we wish to become less confused and upset.

He repeats this by taking a recognisable outline of another blasted dove, but colouring it as a patch of cloudy blue sky over the broader “real” sky of dark grey clouds. Is the dove-shape a window into better weather? Is it a message of potential peace and happiness superimposed on an overcast reality? No, dummy, it is paint on canvas. This, plus lucrative checks and aesthetic kudos, may explain why Magritte, in his flickering, black-and-white, home movies, appears to laugh at us from the grave.

Recently, on these pages, a genuine gentleman, a fine scholar and an American patriot with profound emotional commitment wrote that the U.S. Constitution may be the “soul of America.”

We must not read too much into a single phrase that is meant as prose poetry, but on an important level that great document is, as all documents are, mere words inked onto paper or vellum or parchment; it is no more a soul than Magritte’s scribble is a real pipe. Indeed, to demonstrate the point in one of Magritte’s little surrealist films, a man picks up a clipped-out paper picture of a pipe, thrusts the stem between his lips and lights it as the whole thing goes up in smoke, falling to the table as ash.

Real conservatives must remain aware of the potential of words on paper to become an ideology; to take on an intellectualised life of their own beyond the invisible-but-real core of values, faith and tradition that the words may seek to encourage and protect.

Without that wariness, one is left with a mere document to be parsed and analysed, defined and redefined to suit the most trendy, powerful, motivated or glib. Without a culturally and historically informed majority (or elite), words can be made to mean not what they were intended. Using only a written document, anything can be weasel-worded, twisted and inserted until, for example, America’s founding documents can be perverted to justify the slaughter of 52 million unborn, and the assassination of anyone by state decree and without due process.

Without that wariness any paper is easily traduced, and without the underlying values even the best paper becomes pointless once it is deprived of a cultural foundation and interpreted by no more than momentary appetite.

In a sense, the definition of an ideologue may be anyone who believes that a piece of paper is enough by which to live and govern, be it America’s noble Constitution or the ignoble Communist Manifesto, or even the Holy Bible which the Catholic Church teaches is insufficient of itself.

No paper can forever compensate for a humane society that grows decadent and ever less humane across its traditional, religious and rational components. It is, after all, a manufactured item made by a few men, and must not be confused with the nutrient-rich but vulnerable earth in which it is planted with such great, if illusive, hope.

Nourishing that civilisational soil is a different task and the most important one.