Chasing Shadows: Back to Barterra 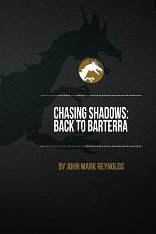 Wind. All he could hear was wind. The voice of Max and the others vanished in the gale of his waking nightmare.

It was dark, the kind of perfect darkness modern people rarely know and so find disorienting. And then he saw a circle, spinning like the outside rim of a wagon wheel and the dreadful sounds began, as he knew they would, and he watched the wheel spin, faster and faster. It was the howling of a gale passing through a space too narrow for the force. It was the sound of despair.

Chapter One: Going Down to the City

His vision of the scene become more expansive and the first spinning wheel became part of a larger system. It was joined by a second inner wheel turning in the opposite direction. This second wheel had parts, smaller spheres perhaps, attached to it. He couldn’t capture it fully and this infuriated him, because he was dimly aware that Max would have understood, but Max was outside the Dream. It was maddening. He wanted to shout out a question to his mentor, but he could not speak.

He knew what was coming and he did not want the dream to continue. “God let it stop,” Peter prayed, but he knew it would not stop. It never did after this point. He was passing right through the center of the spinning circles. His body was burning and then as he reached the center his chest began to feel heavy. It was like being buried alive, but with no coffin, only mud and matter pressing down on his face and soul. Alive. Buried. Buried alive. Until he was in that room, the room he hated once again, and the real dread began.

His body pressed against the rough stone of the basement wall. Or was he the wall? Objects were easy to identify in the Dream, but he was not. He could not see himself and everything was washed out …soft focus.

He was watching what amounted to fragments of a movie or pieces of history. The fragments were not more comforting as they became familiar: the angry men, loud orders, a father, a feeble mamma, four daughters, an invalid boy, friends of the family. All of them leaning on the wall … leaning on him.

The voices of the angry men filled the room, but he, as always, could not quite understand what they said. Orders. Shouts. His vision blurred and his hearing became even more confused. He was not so much seeing and hearing as feeling his dream now. He could sense bits of emotions from the people in the dream room: mostly fear.

Finally, as he knew he must, Peter saw Her and once again realized that he must save her and that once again he would fail. She would die. This woman, his She, was being murdered with all her family. He knew her name, but could not say it. He could not pray, could not move, but merely be the wall against which this
young woman leaned as she died and into which spent bullets flew through her to him.

He felt pain, but not from the lead burying into him. Instead he felt her nails, as she was dying scratching symbols into the wall … into him. He could feel that scratching, desperate writing cutting into his plaster skin. What was her final message? He could not tell.

Her face filled his mind, becoming so sad and beautiful that it felt like a blasphemy not to venerate her. This last part of the Dream was always, almost, bearable. The hatred that filled the room did not touch her. The greater the pain inflicted on her, and it was horrific, the less she seemed aware of it. She did not die in fear or the desire for revenge.

He was, for just a second, overwhelmed by perfect love.

And then his mind began to awake, driven away from the best part of his Dream by the hatred of the men with guns. She was lost to him. Gone. In the whole scene he could soon make out only a few things: the yellow stripes on the basement wallpaper, the odd cap on the chief of the angry men, and the sickening smell.

The great wind that brought him to the room began to suck him out. As he was yanked from the room, moving back again through the images and sounds and the last word of her father, the bearded man, dominated his mind. The word drowned out all thought.

The father said it softly and patiently. It began to echo with authority and righteous anger. The start of a question spat out right before a bullet made speaking impossible. “What?” “What?” “What?”

His friends saw Peter slump in his chair.

Books mentioned in this essay may be found in The Imaginative Conservative Bookstore. Excerpt from Chasing Shadows: Back to Barterra (Unlocking Press, 2012).

About the Author: John Mark Reynolds

Dr. John Mark Reynolds is President and Professor of Philosophy at The Constantine School, a Senior Fellow of Humanities at The King’s College in New York City, and a Fellow of the Center For Science and Culture at The Discovery Institute. He is the former provost of Houston Baptist University and was the founder and director of the Torrey Honors Institute, the Socratic, great books-centered honors program at Biola University. Dr. Reynolds received his Ph.D. in Philosophy from the University of Rochester and is the author of When Athens Met Jerusalem: an Introduction to Classical and Christian Thought.