A NeoCon Night at the Opera 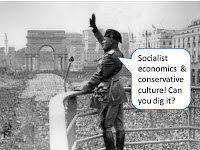 And I’m Hans-Dieter Langweilig. But today we stray from the shores of sunny Italy to the magical, musical world of Strauss.

Hans, our audience is already salivating for the waltzes, the castles on the Rhine, the romance and the gemütlichkeit.

But as you know, Angela, today we are listening to a different Strauss. We are going to hear opera by Leo Strauss, an American professor who was the founder of Neo-Conservatism.

That’s right, Hans. The political scientist who died in 1973 grew tired of being confused with Richard, the composer of Der Rosenkavalier who died in 1949 and wasn’t even the Strauss who wrote the waltzes. So in the mid-1960s, Leo wrote his own opera to explain his political philosophy that drives U.S. policy at home and around the world today. 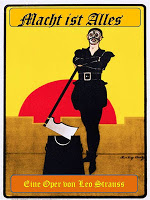 That’s right, Angela. He originally titled this work Macht ist Alles; Ein Märchen der Erkenntnistheoretischen Relativismus, or ‘Power is Everything; A Tale of Epistemological Relativism,’ but at the advice of a follower, Irving Kristol, he changed it to Liebe ist in der Luft; ein Neokonservative Reise, or “Love is in the Air; a Neo-Conservative Journey.”

Not exactly a toe-tapper of a title, is it Hans?

No, Angela, but the revision was still an improvement. And while the bad news is that his opera is fourteen hours long, the good news is that he explains his core political theory concisely in the first of six acts, and we can hear a brief selection in this program.

Brief is a relief, isn’t it Hans?

You can say that again, Angela! Leo Strauss’s Neo-Conservative opera is set in the medieval and tiny, real and romantic town of Dinkelsbühl, where wise old Professor Betrugmann[1] concludes a tutorial with the handsome young Arschgeige[2]. The student has neglected his studies of Machiavelli because he has fallen madly in love with Madeleine Eisjungfrau[3], while his tutor explains how Neo-Conservative principles borrowed from Machiavelli can help the lovelorn youth to win the heart of his beloved.

That’s right, Hans. Our ever-changing world is governed by what Machiavelli called fortuna, and the Renaissance philosopher maintained that the truth or falsity of an idea is determined only by its usefulness. That was a core concept for Strauss. Professor Betrugmann sings it in an example of lieder entitled Kommen sie in ihre unterhose[4], often translated as “The Closeness That You Crave.” Let’s hear some, shall we? 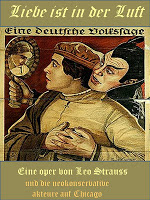 The lark’s sweet song, a-ranging,
Comes pealing from the bower;
The bees of spring, unchanging,
Pursue the gentle flower;
The symphony of seasons
Remains the same, alas,
But Man, he hath no limits
When he wants a piece of ass.

The gentle rain descendeth
In ways that God hath writ,
But morals Man up-endeth,
And matter not a bit;
The robin’s dulcet singing,
He cannot change in tone;
So, if it’s God who’s ringing,
Just don’t pick up the phone.

Hmmm, Angela, I love that recording. Is the baritone Herman Verschmutzung?

It is indeed, Hans. But Arschgeige is hesitant. He fears that the purity of his love for Madeleine, and even Madeleine herself, will be corrupted if he takes advantage of her. Then Professor Betrugmann and his student sing a duet, after which Arschgeige is convinced. It’s called Ihre seele ist wie eine taube/Aber ihre brüste sind wie melonen[5], and it is the finest duet in the entire first half. Let’s hear some, shall we?

Arschgeige: Her soul is like a dove!
Betrugmann: But her breasts are like melons!
A: She lofts me up to love!
B: So big! Like Cousin Ellen’s!
A: But am I pure enough for her?
B: What sayest thou, you foolish cur?
A: If I miss her, dare I kiss her?
B: If you rang her, you could bang her.
A: But would it be right?
B: It’s right for tonight!
A: Tonight, a moral point in time!
B: Tomorrow, one new paradigm!

A: Really?
B: Forget whether it is moral or not; just ask yourself is it good for the principality of Dinkelsbühl?
A: How would I know?
B: Because you are a member of the intellectual elite, you read it in Machiavelli and besides, you are a student of the great Professor Betrugmann!
A: Well, then…I…I guess so.
B: There’s a bowl of condoms by the door. Help yourself. Although you probably don’t need them if you are quite certain that what you are about to do is ultimately good for our city-state.

Hans, I just adore that Naxos recording: who says you can’t get good opera from budget labels! But there is an unusual, shall we say, earthiness to the lyrics. You don’t hear that in Johann Strauss or Richard Strauss, or from any other operatic composer for that matter.

That’s right, Angela, and some critics say it is simply vulgar. But remember that Neoconservative philosophy is only interested in retaining power for national strength: culture is only another tool for controlling the public. Among their insiders, taste does not matter.

Very interesting, Hans, but back to our story. Arschgeige goes home, having made his teacher promise to hide outside of Madeleine’s window as the student declares his love by moonlight. Meanwhile the famous scholar meets a friend on the town council, Burgher von Kleinenfurz[6], who is also the publisher of the local newspaper, Der Dinkelsbühler Leichtgläubig-Telegraf[7].

Another thing, Angela, the professor strolls through the village while wearing an impossibly loud tartan suit of red, yellow and blue, explaining that it stands for important Neo-Conservative principles: red for socialist economics, yellow for liberal politics, and blue for conservative culture.

Gosh, Hans, he must have looked like a traffic accident!

No fooling, Angela. They say that when Karl Schmendrick-Vantzen[9] sang the part at the Met in 2003, he jokingly asked for an air-sickness bag.

Meanwhile, Hans, as the two characters head to a local bierstube or tavern, the councilman jests with him, asking how he could have so little learning and yet become so prominent a scholar. Since Professor Betrugmann is alleged to be Leo Strauss’s alter-ego, what is going on here?

Good question, Angela. Strauss never commented on this himself, but it is thought to be a Neo-Conservative in-joke. One of his followers, Norman Podhoretz, was a rather mediocre literary critic who traded on personal anecdotes; then suddenly he declared himself to be major-league public-policy intellectual and everybody from the Hudson to the Potomac believed him. Many opera scholars think this refers to Professor Strauss poking fun at several of his politically-prominent acolytes.

But it’s a great song, Hans, so let’s share some of it with our audience, shall we? It’s called Der riese im dreck[8], and in it Professor Betrugmann voices his disdain for the common people of his community.

Learn half a page of Goethe, a paragraph of Brant,
Eine kleine Schiller and a tiny scoop of Kant,
A couple lines of Weisse and a demitasse of scheiße
And the swineherds sit there gazing from the mud;
In Dinkelsbühl,
With half his tool,
A man without his knackers
Still can be a stud!

A stud! A stud!
No need to be a dud!
No Sturm und Drang,
With half his wang
A man without his knackers
Still can be a stud!

Hans, I always laugh at the chorus of peasants singing about how ignorant and gullible they are!

That’s right, Angela. When they reach the tavern their co-conspirator, Hauptmann[10] Paul graf von Wolfowitz, has already been stirring up the town to make war on the neighbouring village of Katzenfleisch; which he falsely accuses of watering the schwartzbier and sabotaging Dinkelsbühl industry by peddling inaccurate slide-rules, which he calls “weapons of math destruction.”

But as you know, Hans, the conspirators agree that war is good for the Dinkelsbühl public’s character and morale, and besides, they all own secret shares in the town armoury. So the villagers take to the streets, singing Dinkelsbühl! Wir Führen Krieg! or “Dinkelsbühl! We’re Going to War!”

Angela, it is a good end to the first act visually. But the music and lyrics are among the composer’s weakest, thought to be derived in part from other patriotic tunes and even a sequence from the Marx Brothers’ movie, “Duck Soup.” Nevertheless, let’s hear a few bars.

From the castle to the Weinmarkt,
To the beirstube white with foam,
God bless dear Dinkelsbühl
Our home, sweet home.

Hans, it’s too bad that we have run out of time. Otherwise we could have played Madeleine’s moving aria from the start of the second act.

That’s right, Angela. With Professor Betrugmann coaching from the bushes and Arschgeige pleading his love, Madeleine replies with the immortal Verpiss dich[11], usually translated as “Fly on the Wings of Love.”

But from everyone at Impariamo Opera and NPR, thank you and goodbye for now. I’m your co-host, Angela Tedioso.

And I’m Hans-Dieter Langweilig, wishing you the joy of opera.

Books  on the people and topics discussed in this article can be found at The Imaginative Conservative Bookstore.