Could You Be a British Judge? 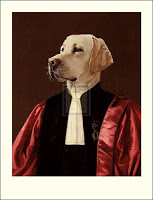 As a British judge, how would you rule under the forthcoming law allowing homosexual marriage? Winners may become British judges after purchasing a horse-hair wig.
1) Clarissa wants to divorce Arthur because he has been having an affair with Clive. Can divorce be granted? (a) yes; (b) no; (c) yes if Clive agrees to a sex-change operation;
2) Sir Brian Titwillow wants to divorce Lady Titwillow who has been adulterous with the Duke of Earl. Can the marital knot be severed? (a) no; (b) yes; (c) maybe, but only in Scotland;
3) Howard’s “husband,” Carlos, has been unfaithful while canoodling with Hans. Can Howard divorce him on the grounds of adultery? (a) yes; (b) no; (c) yes if Carlos is a transsexual who was born as a female.

The answer for each question is (b). You knew that all along, of course.
The Daily Mail explains that under the homosexual marriage bill, expected to soon pass through The Mother of Parliaments: “only infidelity between a man and a woman constitutes adultery.”

“So while the law would give same-sex couples the right to wed, they would not be able to divorce their partner on the basis of adultery if their spouse went on to be unfaithful–unless they cheated with somebody of the opposite sex.

“It also states that a straight person who discovered their husband or wife had a lover of the same-sex could not accuse their unfaithful partner of adultery in a divorce court.”

We provide a link, above, so that you can be assured that we are not making this up.
So, Arthur and Clive have been misbehaving, as have Carlos and Hans, but neither peccadillo will count as adultery because the lovers are of the same sex. Meanwhile Lady Titwillow, making whoopee with His Grace, can be divorced for adultery (as can he), but she would be quite safe were she trysting in the potting-shed with the Duchess of Earl and not the Duke.
The Imaginative Conservative’s massive and fearsome Legal Affairs Department is not certain whether a transsexual counts as what he/she was before or after, um, editing, or indeed whether adultery could be invoked under the new law were the co-respondent surgically half-way between genders.

The newspaper explains that “The lawyers who drafted the Government’s Bill managed to swerve the contentious question of what constitutes sex between homosexual couples by adding a clause which states that only ‘conduct’ between a married person and a person of the opposite sex would constitute adultery.”

It is thought that adultery will be abolished as grounds for divorce for both genders.