The Proper Role of Military Power in a Republic? 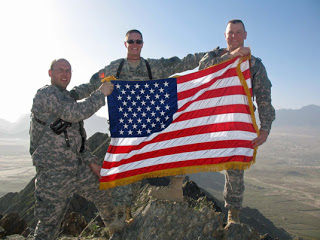 What is the proper role of military power for a Republic? Is it the role of a Republic to maintain a large military presence in foreign lands? For what purpose would a Republic expend large amounts of blood and treasure to promote “democracy” in far away nations? What does this say in relation to countries, such as Cuba, which are much closer to us and living under repressive governments? Would the framers of our governmental institutions (Washington, Jefferson, Adams) support a long term (10 years in Afghanistan, over 50 in Korea) placement of troops in foreign lands? Is it the Republic’s duty to spend whatever is necessary (in lives and borrowed money) for as long as it takes to impose order in places where cultural mores and tribal hatred systemically undermine the conditions which are necessary for ordered freedom to flourish? Is the militarization of our foreign policy a reasonable price to pay for these efforts? Is it likely that our zeal to “make the world safe for democracy” will call for policies and expenditures which undermine republican principles in our own home? If we are in a state of fiscal & moral crisis in this nation is it responsible to make such expenditures even if the goals are determined to be legitimate? Are we truly in a position to tell other nations to get their house in order in light of the state of decay of our Republic?

Books on this topic may be found at The Imaginative Conservative Bookstore.